SomTribune
Home Culture/Religion Art/Literature Somaliland: ‘I paved the way for myself as a YouTuber’ – Chunkz 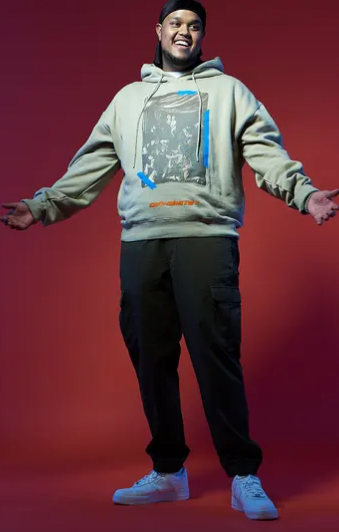 The social media phenomenon on honouring his Somali heritage, balancing fame and faith, and spending lockdown with his YouTube Beta Squad

“It was the scariest day of my life,” says Amin Mohamed, AKA Chunkz, of the day in 2016 that he told his parents he was dropping out of university to focus on his YouTube channel. “I remember waking up for a lecture during the first few weeks of university, and I genuinely stared at my ceiling for 45 minutes, near tears, just thinking: I can’t do this. I had this pressure [weighing on me] that my parents wouldn’t accept me leaving.”

Chunkz is a first generation British Somali (his parents moved here from Somaliland in the late 80s). For me, also a first generation British Somali, he is, as a genuine celebrity from our community, a unique figure – and a local hero. Following in the steps of his three sisters, who had all graduated from university, he was studying financial maths at London Metropolitan University. For Somali kids, it’s not uncommon to have your parents push you toward a “reliable” career. So he stuttered his way through that moment, telling his parents about dropping out of university. His dad avoided eye contact and his mother became really upset. “As I was talking to them, I was doing damage control,” he says.

Chunkz is also a social media phenomenon. His YouTube channel has more than 1.8 million subscribers. His Instagram, 2.3 million. His videos – a mix of pranks, challenges, sports commentary and quizzes – regularly top 1m hits. The content Chunkz puts out feels natural and honest, unlike that of so many of the more polished, wealthy, big-name YouTubers. His warm and charismatic personality makes him feel like someone you really could be friends with. Chatting to him on Zoom, it’s easy to see why he has such a massive, loyal fanbase.

‘The number one rule was: don’t get involved in politics. But I felt that responsibility fall into my lap’

Chunkz has had the kind of dream YouTube career that so many kids fantasise about. He started out filming videos in 2015 in his family home with his cousin and fellow YouTuber Darkest Man. Series such as Cooking with Chunkz, where he would teach his friends how to make laughably basic meals, first got him noticed, and his appearance in Big Shaq’s 2017 viral spoof music video Man’s Not Hot (more than 390m views) made him even more popular. A music contract followed, and in 2018 he won the International Somali award for best entertainer, followed by a Mobo in 2020, the same year he co-presented the awards ceremony with Maya Jama.

His growing profile won him a place at last year’s Soccer Aid match at Old Trafford, where Chunkz missed a crucial penalty (he jokingly refers to this as the worst day of his life) – another viral moment, which in turn has led to a permanent gig presenting Sky’s weekend football entertainment show Saturday Social.

Born and raised in north-west London, the youngest of five (he also has a brother), Chunkz says both his parents played an active role in steering him away from the problems that could come the way of young boys growing up in a council estate in Brent. “I was blessed to have both Hooyo [Mum] and Aabo [Dad].” he says. “By the time we were between 12 and 15, a lot of the kids I grew up with either went to the right or the left.”

Early on in his career, Chunkz noticed that there weren’t many YouTubers like him. He says he looked up to KSI, Poet and David Vujanic, but didn’t feel represented. “I couldn’t really relate to anyone else, so I paved the way for myself. I liked the content of the YouTubers I watched, I thought they were funny, but I couldn’t really see myself in them.” Although he says he avoided speaking Somali in his earlier videos, in case he was typecast and limited his audience, he felt he could connect with an entire community who were not being represented online.

“I love being Somali,” he says. His descriptions of his childhood are familiar: the sweet chaos that comes with growing up with plenty of cousins; the loud iftars and sleepy suhoors (early morning meals) during Ramadan. And playing outside as late as you could get away with: “Everyone’s mum had to come round the corner and scream our names. I’d run inside to eat qado [lunch] and go straight back out.”

As for many young British Somalis, though, myself included, a sense of pride in our culture and heritage wasn’t always easy to find. Despite my own school having a diverse student body, anti-Somali rhetoric was rife – something Chunkz says he also experienced during his school years: “To some people, being Somali was an L [loss].”

The only time you’d hear about Somalis in the media was in relation to famine, refugees, pirates or al-Shabaab militants. As with many Somalis in this country, their parents fled to the UK as a result of the Somali civil war in the early 90s. Growing up, there were barely any high-profile Somalis in the news, certainly not many in the UK. We weren’t represented in culture, or in positions of power. Today, Somalis who are part of the global diaspora are making their presence known. From politics to film-making and fashion, young Somalis can look up to Mo Farah, poet Warsan Shire, boxer Ramla Ali former mayor of Sheffield Magid Magid and award-winning Rocks actor Kosar Ali.

But the British Somali community is still underrepresented and often misrepresented. Disproportionately affected by Covid-19 and police misconduct, the past year has been particularly challenging. Last summer, at the height of the global protests after the murder of George Floyd, the case of 12-year-old Somali schoolgirl Shukri Abdi, found dead in the River Irwell in Bury, Greater Manchester, in 2019, was taken up by campaigners after her mother said police had failed to adequately investigate claims that she was a victim of bullying.

Somalis across the UK, US and Canada organised protests and demonstrations demanding an investigation into the circumstances surrounding her death. In a message posted on Instagram, Chunkz encouraged his followers to contact their local MPs to demand answers in Abdi’s case and spoke at a demonstration in London. As he watched theAbdi case unfold, Chunkz says, there was no way he could not get involved.

“When I first started, the number one rule I was given by another YouTuber was: don’t get involved in politics. I was told to make people laugh and then get offline. But as I grew in this industry, I felt that responsibility fell into my lap. Not only am I Black, not only am I young, but I am also a Muslim man. I’m now seen as a role model, I have to think about everything I do and it can be difficult to balance all of that.”

Since 2019, Chunkz has been living into a £5m house with four other black British male YouTubers, all friends of his, known as the Beta Squad. The group film content together and have spent most of the pandemic together. YouTubers who create group concepts often feel forced, but for Beta Squad it’s different. “We are all like brothers who all happen to be YouTubers,” he says. On camera it’s very easy to see their chemistry, comfort and banter around each other – you can tell they are genuine friends. But like the rest of us, Chunkz has had to come to terms with hard lockdown truths. “The cooking has been dreadful,” he says.

We discuss the pitfalls of fame and success, but Chunkz says he feels confident he can stay grounded. He puts this down to his family, who still see him as “little Amin”, the youngest in the house, and his faith, which keeps him level-headed. “When I go to a shoot or I’m filming, as soon as people hear the adhan [Islamic call to prayer] from my phone, they all know what it is. I’ll get up wherever I am and go pray,” he says.

In a recent video posted to his YouTube Channel, Chunkz announced to the world that he would be quitting music. Speaking to fellow Beta Squad member and YouTuber Sharky, he shared that he feels performing music is incompatible with his religious beliefs. “I have to stop for the sake of God,” he says in the video. The announcement immediately trended on Twitter and the reaction was overwhelmingly positive. As we reflect on this, Chunkz says it was a nice surprise. “It was not what I expected, but it was the best reaction I could have asked for.”

Today, he tells me, he measures success in terms of being able to take care of his family. “I remember when my mum’s dishwasher broke, and just being able to be like, ‘‘Don’t worry, I’ve got it” – it’s a big thing for me. To know that my parents can rely on me.” he says. Chunkz wants you to know he’s thankful. It’s why he repeats “alhamdulillah” (praise be to God) more times than I can count during our conversation.

I ask about his future plans. “I just want to be happy,” he says. He hopes to make more TV and move into film. “The sky’s the limit for me.”

As the lights begin to dim and Maghrib, the penultimate Islamic prayer of the day fast approaches, we wrap up the call.