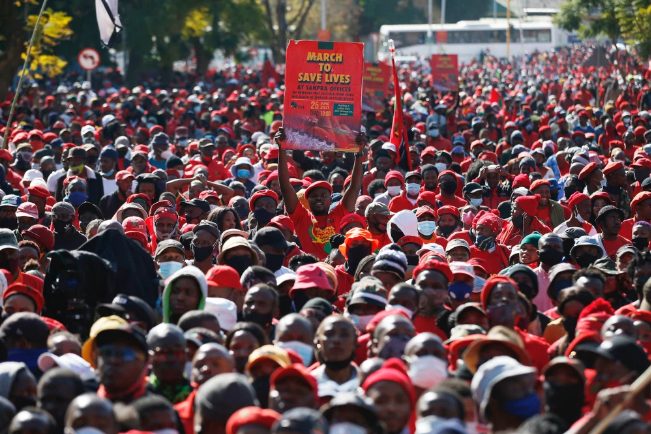 Young people across the continent have been hit hard by the pandemic, lockdowns, and economic stagnation—but their protests have largely been ignored by elderly elites.

Over the last year, young Africans in various countries have faced a hard choice: protest and risk exposure to the coronavirus or stay home in frustration and dire poverty. Millions chose protest. Africa’s youthful population is often cited as one of the reasons that the pandemic has had a less severe public health impact there, but the socioeconomic impact will be felt the most by this very demographic.

Protests over lockdown. It began in Senegal, when mostly young people gathered to protest the arrest of a popular opposition leader but turned on symbols of their lingering frustration, with some looting French supermarket chains. Then, protests over the lack of economic reform in Sudan in July showed that the 2019 revolution was just the beginning of dissent.

In Africa’s last absolute monarchy, Eswatini, youth-driven anger at the lack of political representation and economic opportunity led to days of unprecedented looting and deadly protests. South Africa followed soon after, with demonstrations against the arrest of former President Jacob Zuma dovetailing with anger around increasing unemployment rates and leading to widespread looting and the deaths of 337 people.

Relatively stable Tunisia also saw protests, leading to an ongoing constitutional crisis in the only success story of the Arab Spring. And in Ghana, protests exposed a growing fissure between the country’s leaders and its youth, the majority of the population.

Worth the risk. The protests all have vastly different political underpinnings, but all took place against the backdrop of the pandemic, in economic environments that were worsened by the effects of COVID-19.

While infection rates on the continent have remained relatively low compared to the rest of the world, so have vaccination rates. By the end of August, just 2.5 percent of the continent’s population had been vaccinated, and the low rate of new infections (with South Africa as an outlier) could be attributed to a number of factors that have hidden the true impact of the COVID-19 pandemic in Africa, such as reduced testing capabilities and a lack of care facilities.

“The damage that COVID-19 will inflict in the short term cannot, however, be disputed,” futurist and Africa analyst Jakkie Cilliers writes in the book The Future of Africa. “Millions more Africans will be condemned to extreme poverty, incomes will decline and many will succumb to lack of food as the efforts to constrain infection rates reduce economic activity, jobs and impact upon livelihoods.”

Lingering effects of COVID-19. In the long term, Africa’s economic recovery will be slow and painful. An October 2020 United Nations Conference on Trade and Development report estimated that the continent’s GDP would decline by 1.4 percent if the world enters a recession with a 1.25 decline.

As African leaders met in Paris to discuss their post-pandemic economic recovery at a summit led by French President Emmanuel Macron, International Monetary Fund chief Kristalina Georgieva delivered the disappointing forecast that while the rest of the world is expected to grow at 6 percent this year, Africa will only grow by 3.2 percent. While African leaders lobbied their Western counterparts for aid, it meant little to the millions of young people whose futures hang in the balance—and for whom a one-off stimulus package will make little material difference.

The bulge bites back. For the last decade, Africa’s youth bulge has been celebrated and feared. A median age of 19 presented opportunities as young people took advantage of technological leapfrogging in interconnected economies, voted for charismatic younger leaders (including Senegal’s Macky Sall and Ethiopia’s Abiy Ahmed), or drove change where they could, presenting the optimism of innovation and democracy. They also migrated en masse, risking their lives to flee to a better future on another continent, as jihadism mushroomed and disillusionment with democracy grew.

Before the pandemic, the population growth outpaced the number of jobs available, particularly for young people, as was the case in South Africa. Poor governance and corruption meant that even when states had ambitious economic visions, implementation of these policies was poor.

In countries where younger entrepreneurs have tried to build new industries, as in Nigeria’s tech sector or Ethiopia’s garment sector, the state’s inability to deal with security crises has often made growth difficult. In far too many countries, voting has meant nothing as strongmen have held on to power through rigging and violence, often with the tacit approval of Western allies.

While the pandemic saw the rest of the world contemplating an oft-repeated “new normal,” it was much of the same in many African states. Governments have used the pandemic as an excuse to crack down on dissent or harass marginalized communities.

“Basically a country has a higher risk of political instability when 40 percent of adult population is between 15 and 29 years. Currently 41 out of 54 countries are in that category,” Cilliers told Foreign Policy. “That challenge is compounded when opportunities for young people are severely restricted in the forms of low access to participation in governance, limited education, and failing economic development.”

While it is young people who are calling for change, it is still governments who must answer. The possibilities represented by the continent’s youth can only go as far as those in power will allow.

Mozambique’s massive corruption trial. Nineteen people who were once part of Maputo’s political elite are on trial in Mozambique’s largest corruption scandal to date. More than 60 witnesses will be called in the proceedings that began on Aug. 23, including former President Armando Guebuza, whose son is among the accused.

They face charges including fraud, embezzlement, and abuse of power in the so-called hidden debt scandal. Under the guise of developing Mozambique’s maritime security, the officials, along with an United Arab Emirates-based shipping company and bankers at the Russian VTB Bank and Credit Suisse, allegedly orchestrated fraudulent bonds worth more than $2 billion, or 12 percent of Mozambique’s GDP.

In the meantime, Mozambican civil society groups are trying to halt the extradition of Mozambique’s former finance minister to Maputo, arguing instead that he should be tried in the United States, where three Credit Suisse bankers have already accepted a plea bargain. Manuel Chang has languished in a South African prison since 2018 after his arrest on a U.S. indictment. 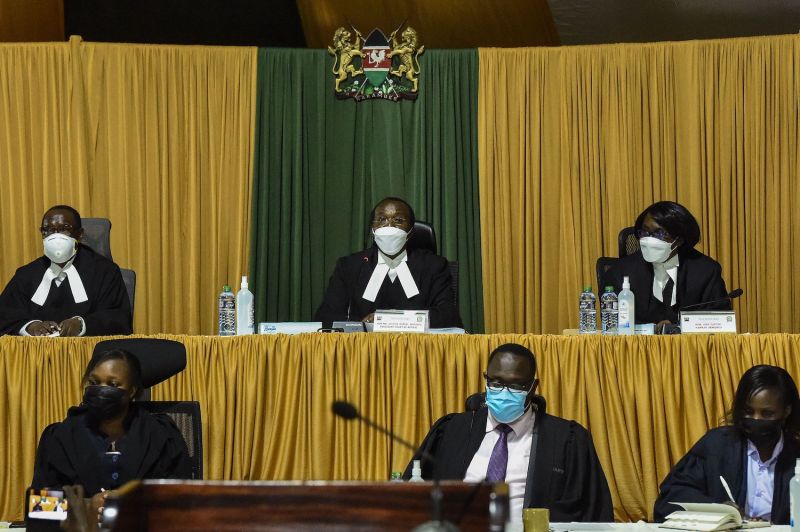 In the back row, from left to right, Lady Justice Roselyn Nambuye, President Court of Appeal Justice Daniel Musinga, and Lady Justice Hannah Okwengu are seen during the ruling of the contested constitutional reforms at the Kenyan Court of Appeal in Nairobi on Aug. 20.SIMON MAINA/AFP via Getty Images

Congo reviews China deals. The Democratic Republic of the Congo is reviewing lucrative deals with Chinese investors, starting with a $6 billion “infrastructure for minerals” contract on a copper and cobalt mine. The review follows an announcement in May by President Félix Tshisekedi that his government would be reviewing all contracts that do not benefit the Central African country, which is one of the world’s top mineral producers.

Finance Minister Nicolas Kazadi said the government was assessing a 2007 deal with Chinese state-owned firms Sinohydro Corp. and China Railway Group Ltd. at a large copper and cobalt mine. Kazadi assured journalists that the reviews would be conducted “in close partnership with the Chinese themselves.”

Rwanda, Uganda take in Afghan refugees. More than 50 Afghan refugees arrived in Uganda on Aug. 25, entering on a private flight chartered by the Rockefeller Foundation after a request by the U.S. government. The arrangement will see about 2,000 Afghans shelter in Uganda for at least three months while the United States and its allies work to relocate citizens in the wake of the Taliban’s takeover of Afghanistan.

Nearly 250 students from a girls boarding school will also settle in Rwanda as the school temporarily relocates to the East African country, also thanks to an arrangement by the U.S. State Department. The humanitarian acts have raised questions about the United States overlooking the human rights record of its allies as it finds itself in a bind.

This Week in Tech

The Gen-Z Mr. Bean. Last week, Khaby Lame became only the second person in the world to reach 100 million followers on the hugely popular social media app TikTok. Just 17 months after losing his factory job at the start of the COVID-19 pandemic, Lame has acquired the kind of internet fame that has translated to mainstream gushing.

The 21-year-old has made a career out of mocking the ubiquitous but absurd life hack videos others post to the platform, reminding his audience about life’s simple pleasures—like peeling a banana without needing a cleaver. Without words, his incredulous facial expression and gestures have created what he calls a “global language” that mocks the very internet culture he inhabits.

His ordinary man schtick against a humble background in an era of overproduced content has earned him the titles of the Everyman of the Internet and the Gen Z Mr. Bean. Born in Senegal, the TikTok star has lived in Italy since he was just 1 year old, and his universal appeal has raised questions about Italy’s immigration laws: Lamy enjoys the title of the country’s most famous TikTokker, but he still doesn’t have citizenship.

Afghanistan’s lessons for Somalia. Somalia has seen limited success against al-Shabab, “despite billions of dollars of investment and extensive international support,” Liban Obsiye and Liban A. Hussein, both with extensive experience within the government, point out in African Arguments. Like the Taliban, al-Shabab has built extensive relations among the country’s tribes, even collecting revenue. To beat the jihadi group, the Somali federal government must create a Somali solution, with the Somali people, they argue.

In communion on Johannesburg’s streets. “Johannesburg streets turn pulpits on Sundays, worshippers gathering in parks and open lands, filling the air with liturgical music and devotion,” Lidudumalingani Mqombothi writes in the Johannesburg Review of Books, celebrating a common but overlooked sight in the city.