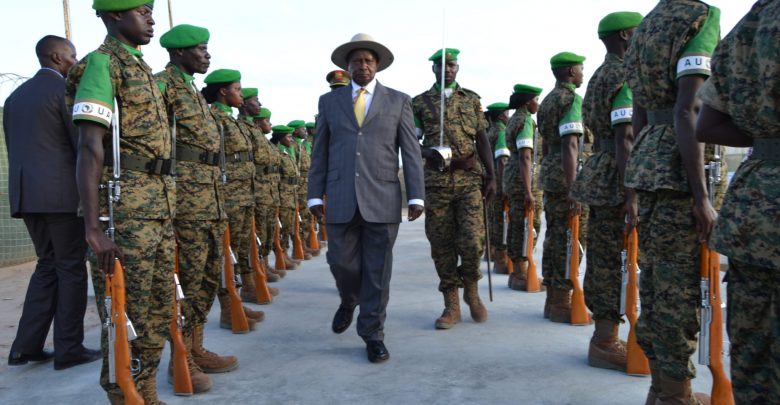 President Museveni has warned he might decide to pull out Ugandan troops from Somalia over the political squabbles in the war-torn country.

Museveni said Somalia is beset by infighting between its leaders, which he described as “political AIDS”.

In an interview with France24 TV airing this Thursday, Museveni said he was tired of the endless political wrangles in Mogadishu.

Tension has been rising in Somali among different political and tribal factions in Somalia.

A group of Somali opposition presidential candidates on Wednesday rejected the government’s plan for 2021 elections, which could cause further delay in the much-awaited political exercise.

The opposition Council of Presidential Candidates, or CPS, rejected a new election roadmap proposed by the federal government and regional leaders, saying the process would give five regional leaders too much power in selecting the electoral delegates who will choose 275 members of parliament.

Opposition leader Hassan Sheikh Mohamud said there is need for a clear path towards the process on who will select the delegates and whom they represent since the parliamentary polls is based on the 4.5 power sharing formula.

VOA reported that the former head of state said they don’t want another delay on the polls, which were already delayed twice before, and thus demands a clear timetable.

The 4.5 formula refers to a plan for sharing power among Somalia’s dominant clans.

The indirect election of the parliamentarians is scheduled to commence early next month before the crucial presidential poll on October 10th.

But, analysts say this new stalemate will delay the presidential poll if not urgently resolved.

“The issue of Somalia is where the internal forces do not come up to shoulder their responsibilities,” said Museveni.

“If they did, the situation would have been solved long ago,” he added.

Museveni further said, “We can not have grafted situations. We must have organically developed situations,” said Museveni in reference to the continuous propping up of the government in Somalia.

In April 2021, Prime Minister Hussein Roble opposed plans to extend the term of President Mohamed Abdullahi Farmaajo and his government by two years.

The fight over the extension of the elections sparked an armed confrontation in Mogadishu, leaving dozens dead.

Earlier this week, President Farmaajo reversed a decision by Prime Minister  Roble to fire the head of Intelligence and Security Agency (NISA), Fahad Yassin Haji Dahir over the death of a female intelligence officer.

In a stinging rebuke, Farmaajo said Roble’s decision, was “illegal and unconstitutional.”

However, there has been fears over the ability of Somali troops to provide security when the Ugandan-led AMISOM forces exit the country.

“The problem of Somalia is not security,” said Mugisha, “insecurity is a consequence of the failed political line of operation.”

He said the central government and federal states needed to resolve their political differences amicably to pave way for the pacification of the war-torn country.

“If that is not resolved, even if you brought 100,000 AMISOM troops, they will not solve this problem. This problem is solvable provided we get the political line of operation right,” said Mugisha.

The rise of the Taliban to take power from the better-equipped and highly trained government forces in Afghanistan sent shockwaves in Somalia.

Observers say the Al Shabaab, who control the better parts of the countryside remain a huge security challenge and could emulate the Taliban against the politically weak government in Mogadishu if AMISOM leaves.

Asked if he was really determined to pull out troops if the political wrangling continues, Museveni responded: “if the internal forces don’t come up.”

“Actually we wanted to withdraw. But some prevailed on us. Are have to discuss with African Union. But for us we believe people defend themselves.”

The wrangling has delayed not only delayed elections but also undermined efforts to provide social services across the country.

Following a coup d’état led by Major General Mohamed Siad Barre in 1969, the Somali constitution and its institutions were suspended until 1979 when a new constitution was drafted and approved via referendum.

The Constitution of 1979 established a presidential system of government. However, power remained concentrated in Barre’s military regime—amidst growing clan-based internal conflict— until an internal Somali rebellion overthrew the regime in 1991.

Somalia’s disintegration and the ensuing internal conflicts attracted significant regional and international efforts to end the war, restore peace and rebuild the state.

A new parliament and government has been installed since 2017 with the leadership promising to finalize the process before the 2020 elections.

The polls were postponed due to political disagreements.

Mugisha, who commanded the fiercest battles in Somalia between 2009 – 2011, said Somalia will continue to walk a tight rope as long as the Federal government and regional states fight for power and resources.

He said more attention needs to be focused on resolving political contestations, building solid institutions and infrastructure to deliver social services to the people.