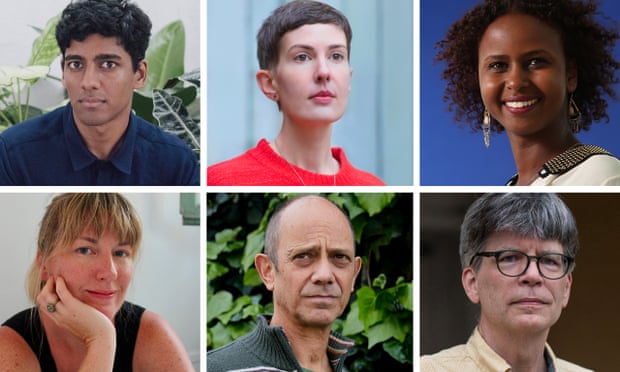 The author of The Fortune Men will now compete with five other novelists from South Africa, Sri Lanka and the US for the 2021 award. Alex Clark explores how the Booker shortlist tunes in to the worries of our age

Just one British author has made the shortlist for this year’s Booker prize: Nadifa Mohamed, who was chosen for her third novel The Fortune Men, a reimagining of the true story of a Somali seaman who was wrongfully convicted of murder in Wales.

The British-Somali novelist, who was born in Hargeisa in Somaliland and moved with her family to London at the age of four, was one of five British authors on the Booker longlist. But major names including Nobel laureate Kazuo Ishiguro, Francis Spufford and Rachel Cusk all failed to make the shortlist for the £50,000 award, which opened its doors to authors writing in English from anywhere in the world in 2014.

The Fortune Men is inspired by the real-life story of Mahmood Mattan, who was wrongly found guilty of the murder of a shopkeeper. “To be here, reaching out to a much wider audience about this novel that’s been so important to me, that’s taken almost 20 years of my life to get out there, is something that you don’t expect,” said Mohamed, who is the first British Somali novelist to be shortlisted for the award.

Three American authors made the shortlist – Patricia Lockwood, chosen for her debut novel No One is Talking About This, in which a woman known for her viral tweets is faced with a real-life tragedy; Maggie Shipstead, shortlisted for her story of a vanished female aviator, Great Circle, and Richard Powers. Powers, who was shortlisted for his previous novel, the Pulitzer-winning The Overstory, was chosen for Bewilderment, in which a widowed astrobiologist builds simulated worlds as part of the search for life on other planets, while raising a troubled young son devoted to saving this one.

Sri Lankan author Anuk Arudpragasam’s A Passage North, in which a young Tamil man travels north from Colombo for the funeral of his grandmother’s carer, and South African Damon Galgut’s The Promise complete the lineup. Galgut, who has been shortlisted twice before, tells of how the vow made by a white South African woman before she dies, to give a house on the family farm to their black servant, fails to be kept.

“Ultimately, we have to lose some great titles along with elevating some other great titles. We’re really just looking at it book by book by book, and trying to make the most reasoned and grounded and deeply felt decisions that we can,” said historian Maya Jasanoff, who chairs the judges. “What I can say is that every book is judged on its own merits and judged against the other books on the list.”

Jasanoff was joined on the judging panel by the novelist Chigozie Obioma, who said that judges had not considered the nationality of authors when reading their books. “We look at not just what the writers are saying, but how they are saying it, and therefore nationalities do not really matter. What matters is what the writer has brought to the page, the vision that they have and how they have realised it,” said Obioma. “So if we don’t have many British writers, I think it’s just a coincidence.”

His fellow judge, actor Natascha McElhone, agreed. “It just wasn’t part of the discussion. It was about the writing, how compelling the story was, how relevant it was, whether it opened our hearts and minds, whether it taught us something we weren’t already familiar with, whether it was original, unique, maverick, interesting, funny.”

In the past, publishers and authors have pushed for the Booker to reverse its rule change of 2014: before that date, the prize only allowed citizens from Commonwealth countries and the Republic of Ireland to enter. Director Gaby Wood said that if the current rules were “strongly felt to be a problem”, the award would “listen to the reasons why”, but that “there are political as well as literary problems with reverting to a Commonwealth framework. I mean, it is essentially a colonial framework. I don’t know that this is the right time to do that, if there ever was a good time.”

Jasanoff added: “I find it interesting that there’s so much attention being paid to the passports held by authors when literature is something that has always crossed borders, and continues to cross borders in striking ways. I find it pretty remarkable within the 21st century that people are talking about the former British empire as an appropriate container within which to think about literature.”

Jasanoff, whose judging panel also includes writer and editor Horatia Harrod and the writer and former archbishop of Canterbury Rowan Williams, said that the six novels chosen “share an interest in how individuals are both animated and constrained by forces larger than themselves”.

“Some are acutely introspective, taking us into the mind of a Tamil man tracing the scars of Sri Lanka’s civil war, and an American woman unplugging from the internet to cope with a family crisis. Some enter communities in the throes of historical transformation: the Cardiff docklands in the early years of British decolonisation, and the veld around Pretoria in the last years of apartheid. And some have global sweep, following a mid-century aviator in her attempt to circumnavigate the planet, and a present-day astrobiologist raising a son haunted by climate change,” she said. “While each book is immersive in itself, together they are an expansive demonstration of what fiction is doing today.”

Bea Carvalho, Waterstones Fiction Buyer said: “The Booker Prize consistently generates strong interest from readers, and this year’s titles have already enjoyed an especially strong boost from the longlist announcement. Of the shortlisted titles, The Promise has been our bestseller, while The Fortune Men has seen the biggest uplift in sales, with an increase of nearly 2,000% week on week after the longlist announcement. Meanwhile, Bewilderment’s publication this month was already set to be a real highlight in the year’s literary fiction calendar, and we are delighted that it now arrives with the Booker Prize’s shortlisting under its belt.”

The winner will be announced on 3 November at a ceremony held in partnership with the BBC at Broadcasting House’s Radio Theatre.