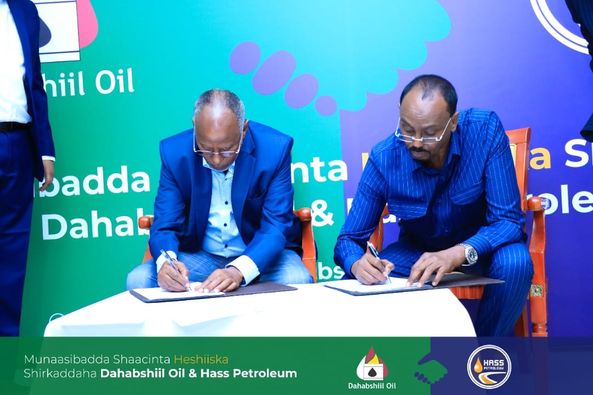 A well-organized event was attended by Hass Petroleum executives, the Speaker of Parliament, government officials, businessmen, and dignitaries for the announcement of the agreement between the two companies.

Abdirahman Ali Abdi, Dahabshiil Group’s Deputy General Manager, said in a statement that the Dahabshiil Petrol sector has acquired a large stake of Hass Petroleum, a venture that gives to lead management and operations.

Abdikadir Ahmed Hussein, a board member of Hass Group Co, who spoke at the event, said the company, which was founded in 1997, had begun their business in Somaliland they year 2011.

The Speaker of the House of Representatives, Mr. Abdirizak Khalif, who addressed the event, said that large companies are the backbone of the country and the country’s economy depends on it.

The Minister of Transport and Roads, Mr. Abdirizak Atosh, said that he was fortunate to witness the day Hass Petroleum arrived in the country and today merging with Dahabshiil.

Abdinasir Ali Hussein, CEO of Hass Group, said that the company operation started with one petrol station, and is now manage 60 stations, and invested more than 50 million here.

Hass & Dahabshiil vision is to reach like Shell and Chevron.