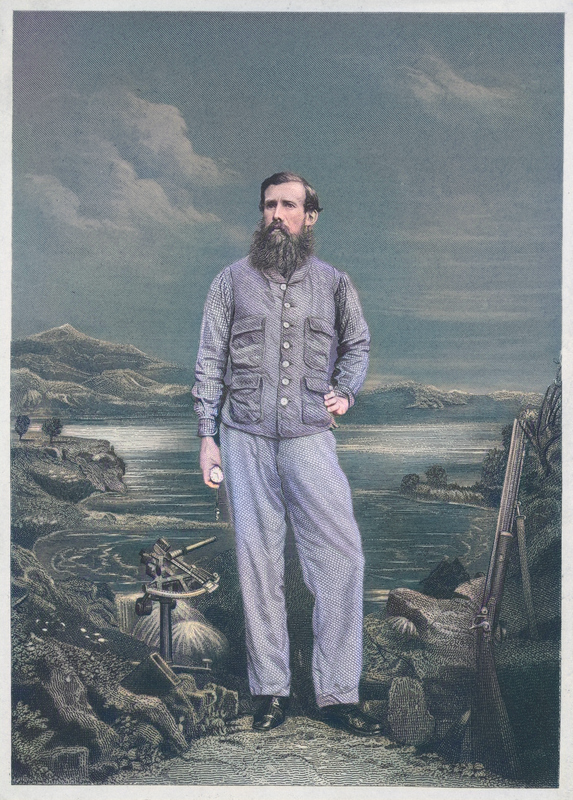 On September 15, 1864, British explorer and army officer John Hanning Speke died by accident with a shot gun. Speke is most associated with the search for the source of the Nile and was in fact the first European that reached Lake Victoria and as such is the “discoverer of the source of the Nile“.

“The expedition had now performed its functions. I saw that old father Nile without any doubt rises in the Victoria Nyanza, and as I had foretold, that lake is the great source of the holy river which cradled the first expounder of our religious belief. “
– John Hanning Speke, 1863 Journal of the Discovery of the Source of the Nile.

Speke was born on 4 May 1827 at Orleigh Court, Buckland Brewer near Bideford, North Devon, UK, as one of seven children of William Speke, a retired army captain, and Georgina Elizabeth (née Hanning) who came from a wealthy mercantile family. He was educated at Barnstaple Grammar School and at a college in Blackheath, London.[2] In 1844 he was commissioned into the British Army at the 46th Regiment of the Bengal Native Infantry and posted to India, where he served during the First Anglo-Sikh War. He spent his leave exploring the Himalayan Mountains and Mount Everest and once crossed into Tibet. It was during these actions that he formed a lifelong friendship with fellow officer James Augustus Grant, who would later accompany Speke in his African explorations.[2]

In 1854 he made his first voyage to Africa, first arriving in Aden to ask permission of the Political Resident of this British Outpost to cross the Gulf of Aden and collect specimens in Somaliland for his family’s natural history museum in Somerset. This was refused as Somaliland was considered rather dangerous. Speke then asked to join an expedition about to leave for Somaliland led by the already famous Richard Burton.[4] Speke was accepted because he had traveled in remote regions alone before, had experience collecting and preserving natural history specimens and had done astronomical surveying. While camped they were attacked at night and Speke ducked under the flap of a tent to get a clearer view of the scene and Burton thought he was retreating and called for Speke to stand firm. Speke did so and then charged forward with great courage shooting several attackers. The misunderstanding of this incident laid the foundation of their disputes and dislikes much later. Speke was severely wounded in an attack by the Somalis that broke up the expedition.[1] The expedition was a severe financial loss and Speke’s natural history specimens from his earlier leg were used to make up for some of it.

In December 1856 he rejoined Burton on the island of Zanzibar. Their intention was to find a great lake said to lie in the heart of Africa and to be the origin of the Nile. After exploring the East African coast for six months to find the best route inland, the two men became the first Europeans to reach Lake Tanganyika (February 1858). During the return trip, Speke left Burton and struck out northward alone. On July 30 he reached the great lake, which he named in honour of Queen Victoria.[1] However, much of the expedition’s survey equipment had been lost at this point and thus vital questions about the height and extent of the lake could not be answered easily.

The Rivalry of Burton vs Speke

From the beginning, the relationship of Speke and Burton was one of opposites; Burton considered Speke inferior linguistically and a less experienced traveler in remote regions but Burton himself appears to have been jealous and far less able to relate to the safari caravan to keep the expedition motivated and moving. Burton was appointed the head of the expedition and considered Speke, rightly, the second in command, although the pair seemed to have shared the hardships and labors of the journey pretty much evenly. Once it became clear that Speke might have found the source of the Nile the relationship deteriorated further.

Towards the Sources of the Nile

Speke’s conclusion about the lake as a Nile source was rejected by Burton and was disputed by many in England, but the Royal Geographical Society, which had sponsored the expedition, honored Speke for his exploits. On a second expedition (1860), he and James Augustus Grant mapped a portion of Lake Victoria. On July 28, 1862, Speke, not accompanied by Grant for this portion of the journey, found the Nile’s exit from the lake and named it Ripon Falls. The party then tried to follow the river’s course, but an outbreak of tribal warfare required them to change their route.

Even after Speke had seen the waters of Victoria coursing over Ripon Falls and down the Nile, however, there were some who remained unconvinced that Herodotus’s fabled fountains had in fact been found. Burton was a leading critic: Speke had not, he said, followed the Nile the entire way from Victoria to Gondokoro. At a meeting of the British Association for the Advancement of Science in September 1864, it was arranged that Burton and Speke present their theories. But on the day before the debate Speke went partridge shooting at Neston Park near Bath, mishandled a gun while crossing a stone wall, and fatally shot himself.[3] Accounts of his explorations were published in “Journal of the Discovery of the Source of the Nile” in 1863 and 1864.

In 1874–1877, Henry Morton Stanley mounted a new expedition and took a boat along the entire shore of Lake Victoria;[5] he established that Lake Tanganyika and the Nile were not connected in any way, and he explored the headwaters of Lake Edward. It was now proven that Speke had been right all along and that the Nile flowed from Lake Victoria via Ripon Falls and Murchison Falls to Lake Albert and from there to Gondokoro.