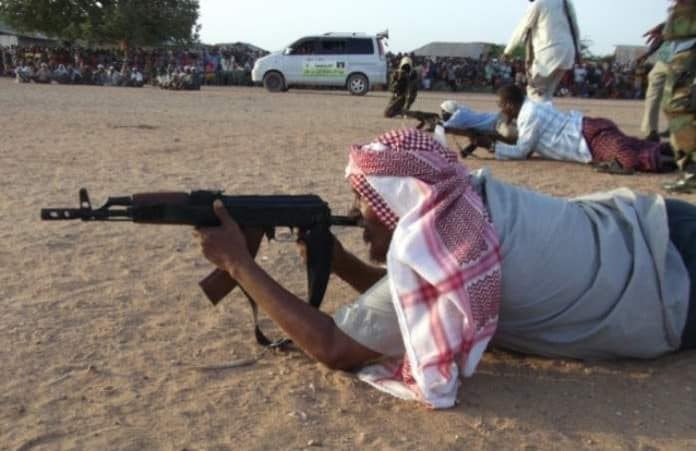 Al-Shabaab hunt-down of security officials and government personnel still remains unabated in the capital city of the beleaguered, failed state of Somalia.

The al-Qaeda linked militant jihadists changed mode of operations from direct engagement to hit-and-run targeted assassinations after they were driven off Mogadishu by combined AMISOM and government forces.

Three-member Assassinations units continue to hunt down and kill security officers and civilian government officials at will and in broad daylight in the city.

In the latest on Wednesday, the group announced on media loyal to its cause that it gunned down two police officers, one of whom – Hassan Da’ar – was an elderly officer.

Hassan was at the time he was killed a member of the police contingent stationed at the main Wadajir Police Station of Medina district. He and the other officer Ali Musa ‘Ali Dahab’ were shot and killed at a stone’s throw distance from both the police station and the district administrative offices.

Today, the Group executed two men at a public square in the town of Kamsuma, Jubaland.

According to Al-Shabaab pronouncements, Abdullahi Oyow was found guilty of molesting a young boy, while Abdullahi Mohamed Farah’s was charged for belonging to the Jubaland administrative setup.

It was only yesterday, Wednesday, that the group executed two other men at another public square in the Jamama city of Jubaland.

Abdullahi Hassan Omar, 59, was accused of practising sorcery and witchcraft. Mohamed Mawlid Adan, 48, lost his life by the mere fact that he belonged to Jubaland police forces.

Together, Al-Shabaab, Daesh and other non-government movements such as the Ahlu Suna Wal Jama’a, control the better part of Hirshabelle, Southwest, and Jubaland federal states of Somalia. Daesh commands large swathes of land in the Puntland federal state, too. The ISIS-affiliated militants, particularly, have been active in the Nugal and Bari regions of Puntland of recent while al_shabaab intermittently surfaces and engages security forces in the Galgala mountains west of Bossasso.

Somalia security largely improved but was not completely successful since the world started injecting huge amounts of funds for the purpose from 2007 onwards. The first handful of AU-organized peacekeeping troops were first deployed in the country in 2011. Since then, the ranks of peacekeepers climbed to over 22 000 bolstered, too, by an unaccounted for numbers of special operatives and air-support units from the United States, UK, and Turkey deployed under differing guises and covers.