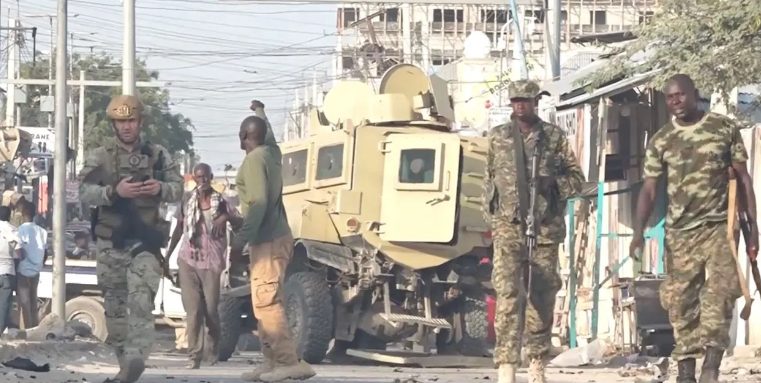 The Somali-run Al Shabaab militants, Monday, claimed responsibility for a suicide mission executed on vehicle-borne IEDs targeting an AMISOM convoy passing through a busy junction in the Somalia capital, Mogadishu.

The vehicle, driven by a suicidal fighter, rammed into one of the vehicles in the convoy causing considerable damage not only to the targeted vehicle but several of the others and the adjacent area.

The operation happened at the Banadir junction.

“Our martyred fighter aimed at a vehicle that carried two Americans working for a Pacific Architects and Engineers which gave logistics support to the Somalia army,” a statement from the Jihadist fighters stated.

The statement added that the mission was successful and that they had their American kill confirmed which – if true – would lend the al-Qaeda linked fighters a considerable publicity boost.

At least three other deaths and several injuries, however, were  confirmed by witnesses.

Neither the government nor independent eye-witnesses immediately confirm or repudiate the Shabaab claim.

The Banadir junction incident closely followed a roadside bomb explosion which was executed in another part of the same vicinity of the capital.

Of recent,  Shabaab fighters operated in Mogadishu at will, collecting taxes, and executing targeted killings in broad daylight despite the country’s huge security-marked aid drain to the international community running into billions of USD.