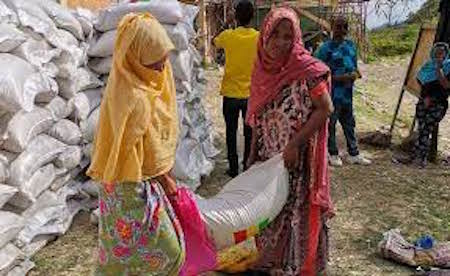 The longer the 12-month conflict in Ethiopia drags on, the greater the damage to the fragile stability of the Horn of Africa. It has already sown the seeds of regional destabilization that will accelerate if a political settlement is not sought urgently.

It is a sign of this concern that President Uhuru Kenyatta of neighbouring Kenya is actively engaged in trying to promote a resolution to the conflict and to lay the groundwork for a longer-term political settlement in Ethiopia.

From the moment the fighting began, Ethiopia’s neighbours sensed unprecedented danger. If not rapidly contained, which it was not, the conflict would trigger a chain reaction of claims for self-determination and drain the economy. The consequences would not be confined within the borders of Ethiopia. At issue now is whether a country of 110 million people can be prevented from unravelling.

The effects of failure will be felt in neighbouring states, in the fragile relations among the countries of the region and in the strategic environment surrounding the Horn of Africa.

Conflict and economic collapse beget displacement and the hardest hit by a migratory wave will be Kenya and probably Somalia. If this wave grows, migrants – and the numbers could be very high – will try to reach South Africa and Europe. All of Ethiopia’s neighbours have their own economic challenges and this additional influx will test their financial capacities.

Ethiopia’s centrifugal political forces were contained over the past 30 years by significant budget subsidies to the regions nearest to the frontier. This is no longer the case. The cost of war has diminished the subsidies to these already impoverished border populations, who will seek more opportunity across the frontier.  Once the provider of stability in the region, Ethiopia has become an exporter of insecurity. Ethiopia is now over-armed and under-financed. Weapons are making their way across frontiers and one should be alarmed that the jihadist group al-Shabaab, for example, can buy guns more cheaply from the Ethiopian market than it does from Yemen.

Ethiopia’s deteriorating internal security is being exploited by al-Shabaab and other likeminded groups to infiltrate and recruit in Ethiopia. If this persists and succeeds, an entirely new front is opened making Kenya’s security even more fragile.

The threat has now been exacerbated by Abiy Ahmed, the Ethiopian prime minister, calling for a levee en masse under which every locality has been encouraged to arm itself, unleashing weaponized radical groups or plain local warlordism.

The dispute over centralization of political authority in Ethiopia, which spilled over into the war with Tigray, was accompanied by a deliberate and parallel strategy to realign influence in the Horn of Africa.

It is now emerging that the agreement between Isaias Afewerki, the president of Eritrea, and Abiy – for which the latter won a Nobel Peace Prize in 2019 – supplemented by the inclusion of Somalia into a trilateral agreement, was to to create a bloc of countries with highly centralized and authoritarian political systems to control the eastern coastline of Africa, from Eritrea to Somalia. In the process, efforts to consolidate cooperative security and development in the region, under the umbrella of the Intergovernmental Authority on Development, were jettisoned, leaving it with new divisions and no institution to manage differences.

Multilateral options, in short, were deliberately abandoned. The Horn of Africa thus hovers over how the fate of this political axis will be managed in an institutional vacuum. Djibouti is caught between the contending politics of Ethiopia, Eritrea and Somalia. In Sudan the move to overthrow the experiment in political reform in favour of the military is colliding with sustained popular resistance. South Sudan is prey to its own post-independence demons. Kenya is fighting to inoculate its open economy and competitive political system from the infection of a region where the centre – usually Ethiopia – no longer holds.

If this grim outlook is not reversed, the threat of disorder emanating from Ethiopia will not only engulf the region but threaten the security of the Red Sea.

Abiy’s war on Tigray has turned into the potential dissolution of Ethiopia. Nothing is permanent, not least in a region which has recognized two secessions and lives with another in Somaliland.

The current successor of the Ethiopian empire may collapse. Eritrea’s lethally eccentric regime cannot last forever. But Ethiopia’s vast population, whether living in a united country or as separate entities, will inevitably seek access to the sea.

For many years, Ethiopian hegemony in the region allowed for the containment of crises. Ethiopian troops served in peacekeeping operations and in AMISOM, the African Union Mission in Somalia. Ethiopia and Kenya had an understanding that dated back half a century. Ethiopia’s relations with Sudan were balanced by a Faustian bargain between Omar al-Bashir’s Islamists and the regime controlled by the Tigray People’s Liberation Front in Addis Ababa. Eritrea’s bizarre isolation could gradually have ended with the rapprochement with Abiy.

All these assumptions have now been shattered. Ethiopia must struggle to avoid dissolution. Eritrea’s authoritarian vision of order in the region will be replaced by that of the political victors in Addis and their vision of Ethiopia’s relations with its neighbours and the wider world.

Thus, a new transition beckons for Ethiopia. But this time, it must encompass the whole region which will have been so damaged by the events of the past few years.

The international community will have to consider how this transition is not hijacked again and under what conditions it can be sustained financially to give populations the belief that peace does not degenerate again into war and regional insecurity.