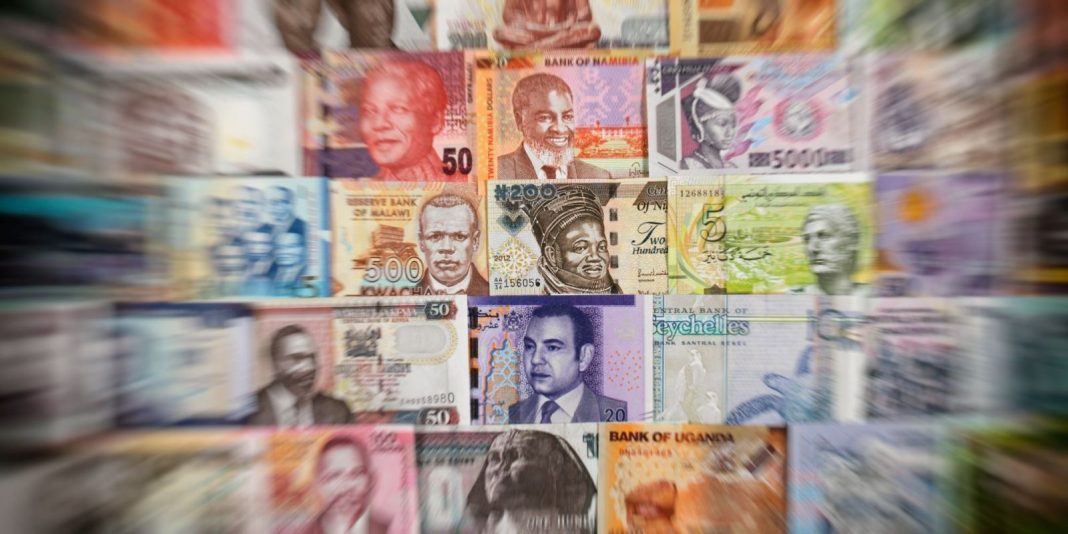 The team had missed the deadline to print a document by a day, but I was determined to get it done as I roamed the streets of Hargeisa, Somaliland. The sun was baking the streets, dust rose to meet my feet, and in my colourful shirt and trousers layered in brown dust, I stuck out like a sore thumb, a foreigner on the loose.

I eventually found my print shop, but I gained an insight into the intense street-side trading that makes Hargeisa tick. Here in the capital of Somaliland – which has had a succession of democratic elections after declaring its independence from dysfunctional Somalia – traders haggle over goods in open-air markets. To the casual onlooker, it seems to be, as David Kilcullen reminds, ‘like throw-backs to a simpler age, but they are really intentional businessmen navigating complex multi-party deals, in a global market, with a floating exchange rate”.

The marketplace in Hargeisa is a hive of commercial activity. Traders strut about making deals as the occasional donkey-led cart trots by. Amidst the men grouped around a table, sipping tea and some indulgently chewing khat, complex deals are occurring by the minute, between business partners and extended kin, from downtown Hargeisa to Rotterdam, Oslo or even Minneapolis. The word that comes to mind is ‘access’.

The Somalilanders have global interconnectivity to thank for the opportunity of financial inclusion. International money transfers are a staple of the Somaliland economy and represent innovation in inclusive banking in a city without a modern conventional (i.e. non-Islamic) banking system, within an unrecognised country and therefore only tenuously connected to global banks. This feature of the Somaliland economy is a daily reminder of its relentless drive to thrive and the ingenuity of its people.

Access to opportunity is – or ought to be – the African priority. When people engage in productive and economically rewarding activities, they create better outcomes for themselves and their families. ‘Alleviating poverty and creating prosperity are fundamentally two different things,’ reminds Efosa Ojomo, a senior research fellow at the Clayton Christensen Institute for Disruptive Innovation.

The time to dilly dally is long gone. Instead, we need to make better choices rooted in today’s global realities.

Over the next generation, the continent’s population is expected to double to 2.5 billion, more than half of whom will live in cities. In 1960 this figure was just 10%. The continent’s contemporary cohort of some 420 million young people aged 15–35 already face a daunting future. Only one in six is in steady wage employment, and just 77% of the population is literate – the lowest of any region in the world. With a burgeoning population, especially youth, growth is imperative for economic, social and political wellbeing. However, how this all turns out – glee or gloom – is not preordained. The outcomes will depend on the decisions that are made today.

It is no exaggeration to say that global stability over the next half a century depends on the choices that Africa makes for itself and the initiatives it takes.

Aligning thus with a development-through-growth mindset will be imperative. This involves creating systems that deliver growth to its constituencies, focusing on macroeconomic stability, including developing alternative financing models for infrastructure and securing, through partnerships, the necessary resources to reform its bureaucracies and ineptitudes. And of course, realising the comparative advantages and constraints — globally, regionally and nationally — of private sector investment and long-term investor time-horizons.

Foreign direct investment (FDI) to Africa declined from $47B in 2019 by 16% to $40B in 2020 – a downward trend only made worse by Covid-19, according to UNCTAD’s World Investment Report 2019. The continent’s FDI flows were just 4% of the global total of $1T; its share of the global population is almost 17%. On the other hand, developing Asia received $535B in FDI in 2020, over half of the total and closer to its share of the global population of 58%. Given the predominance of extractives in FDI-allocation, it is perhaps not the perfect metaphor for growth or development. 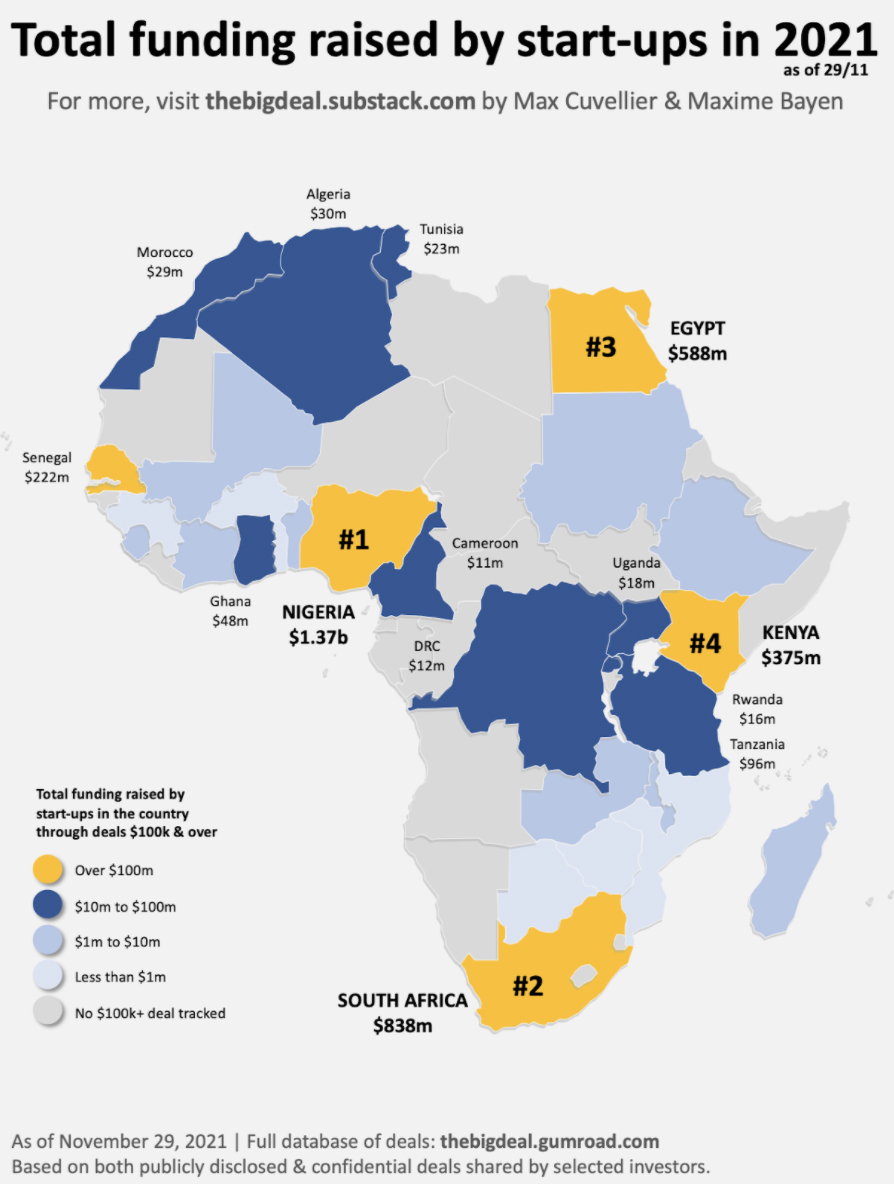 Between July and mid-November alone, Africa has seen on average one $1m+ deal announced every day, according to Max Cuvellier, Head of Mobile for Development (M4D) at GSMA. In 2019, it was every three days, then every other day in 2020, and then every 1.6 days in the first half of 2021. Nigeria, South Africa, Egypt and Kenya dominate venture capital, claiming 80% of the total capital raised on the continent so far this year, Nigeria alone accounts for some 35% of total capital raised.

Why is this important? Venture capital is a critical source of finance for early-stage enterprises, enabling entrepreneurs and fostering innovations that promote economic growth and job creation. Tanya van Lill, CEO of the South African Venture Capital Association (SAVCA), revealed from the 2018 Venture Capital Survey that 77% of VC-backed businesses surveyed in South Africa increased their business’ capability regarding the number of full-time employee positions. In 2020, there was a 22% year on average increase in jobs by companies with VC investment.

The rapidly evolving digital economy, which for the most part powers and is itself powered by venture capital, is a defining factor in Africa’s reality. While traditional physical markets still exist, as in Hargeisa, a digital one pulsates across trade channels on the continent. In the next four years, the digital economy is projected to contribute up to 5% of the continent’s GDP by 2025, contributing nearly $180 billion to its economy.

Despite this, today, still, for many investors, the problems remain the same: it is difficult and expensive to do business on the continent.

In order to fully take advantage of digitalisation, Africa will have to find ways to discover and exploit specific benefits, including democratising access by lowering the cost of smartphones (in part by eliminating import taxes) and reducing the cost of internet connection (enable faster and more affordable connectivity), not taxing the movement of money, and facilitating the growth of digital economies through progressive digital governance.

In the next 25 years, some 86% of the world’s extreme poor are projected to be living in sub-Saharan Africa. This is and will be, a result of poor policy choices and decisions that have failed to generate pro-poor growth, such as in places like China, South Korea, Japan, Indonesia, and elsewhere.

Today, an enormous amount of entrepreneurial energy is waiting to be unleashed. However, to create world-class firms with good jobs, a supportive policy environment must exist – one that helps them overcome the challenges posed by the continent’s history, location, and perception. Africa has a significant vein of old and new entrepreneurs keen to build world-class firms that tackle the social, political and environmental issues the continent faces with beneficial implications for economic growth.

Africa’s leadership has to employ a sense of urgency, crisis really, to build an offramp from business as usual. Perhaps a little abnormality – like inclusive growth and development – will be beneficial.

It is often said that insanity is ‘doing the same thing over and over again and expecting different results’ – a cliché oft-repeated in a world that seems slow to learn from its mistakes. Yet, when it comes to political machinations to drive economic growth, Africa’s leaders seem to do the same things over and over in the expectation that somehow things will get better – or at least get less bad. This approach (false, as it turns out) tells of a leadership comfortable with doing the bare minimum and a population that in part perceives itself helpless to change the game. The poverty alleviation project has not worked; it’s time to demand opportunities that allow for creating prosperity.

If the last six decades are anything to go by, making progress in transforming Africa’s economies is difficult given the inheritance from its heavy past and the complex political economy of countries. But the option to not do more will be more detrimental to its stability. So Africa, its leaders and people, need to get better at changing tack and trying other options. There is, after all, a varied and extensive menu of lessons of what success could look like. DM

Marie-Noelle Nwokolo is a researcher with The Brenthurst Foundation, where she runs its podcast channel.