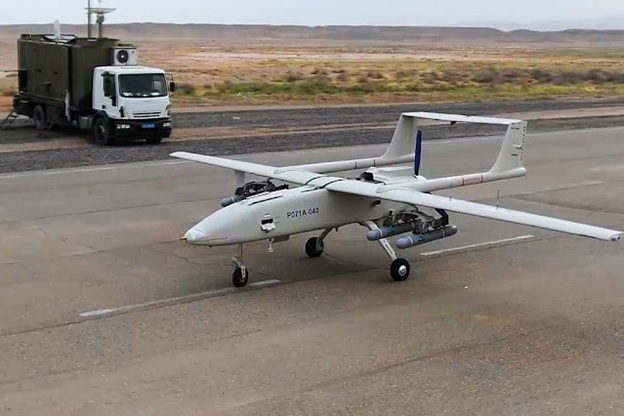 Satellite imagery from early December 2021 indicates that the Ethiopian Air Force (ETAF) has deployed Mohajer-6 unmanned combat aerial vehicles (UCAVs) to Harar Meda air base near Ethiopia’s capital Addis Ababa.  The ETAF is known to have acquired two Mohajer-6s from Iran in early August, which it subsequently deployed to Semera airport in northeastern Ethiopia.

It is unknown whether the Mohajer-6 sighted at Harar Meda is one of the two examples delivered in August or a newly-delivered example that recently arrived to the country on board the Iranian air bridge that is still ongoing.

The latter would likely do much to anger the United States, which has sought to limit Iranian influence and arms exports around the region. American officials in Addis Ababa have already made private representations to Ethiopian Prime Minister Abiy Ahmed about the Iranian support and cargo flights to the country, urging him to cut them off, according to a New York Times investigation.

Although acquired with much anticipation on the side of Ethiopia, the operational career of the Mohajer-6s in the country ended almost as soon as the drones had been delivered in August 2021, with both drones acquired almost immediately grounded as problems in their control systems prevented their actual use over Ethiopia.

This was undoubtedly much to the dismay of the Ethiopian Air Force, whose next confirmed acquisition of UCAVs only occurred in mid-September 2021. [6] It would take until late October 2021 when the problems with the Mohajer-6s finally appeared resolved, some 2.5 months after their arrival to Ethiopia!

Throughout early November 2021, both Mohajer-6s were regularly sighted on the runway and tarmac of Semera airport. [7] The frequent repositioning of the drones on the tarmac also indicates that the drones are now conducting regular flights against Tigray forces.

By Stijn Mitzer and Joost Oliemans