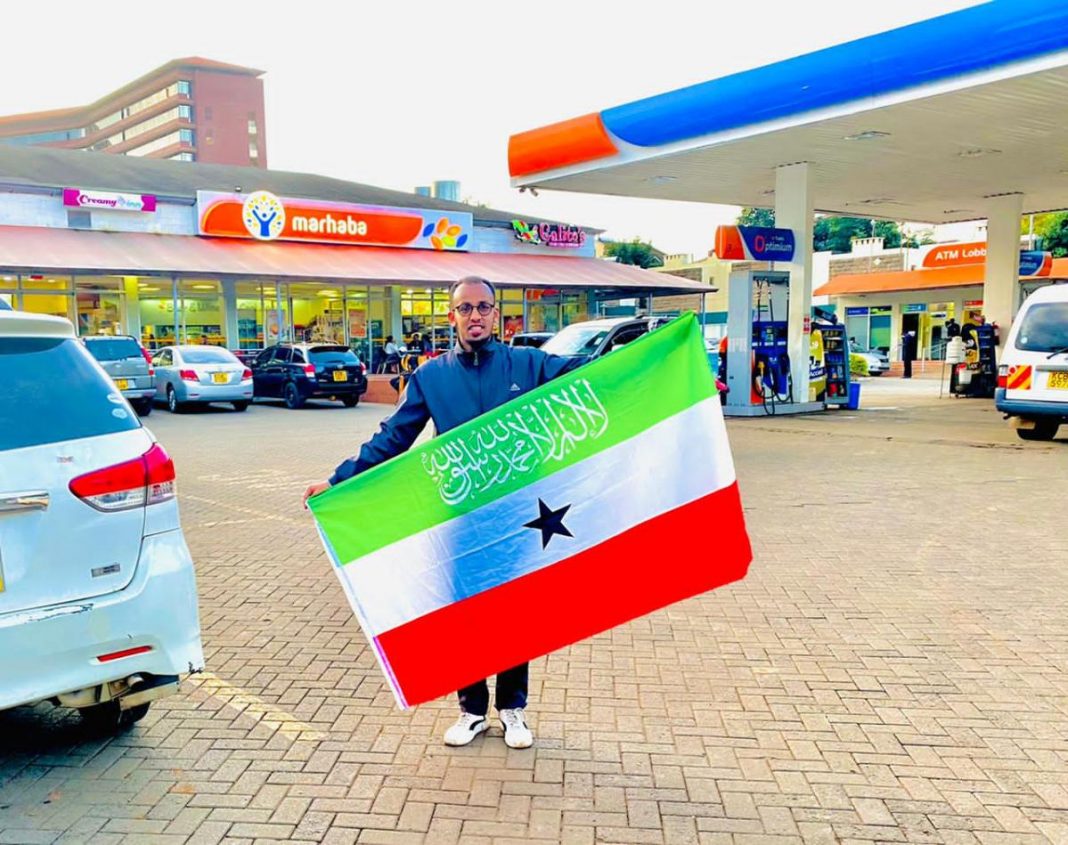 Somaliland has it’s own flag, currency, passport, government system, public institutions and national army who fully control the territory of our nation.

If a place with geographical and political boundaries, under normal circumstances, has a President, issues visa to incoming visitors through its consulates, has own flag, issues own number plates to motor vehicles and contains all other trappings of countryhood, then, it is an independent nation.

But this, is not the case for Somaliland, located in the Horn of Africa. Despite being practically independent with all the attributes of a nation, the international community still regards it as a place in Somalia. Its efforts to be recognized have for years hit a dead end.

Ismael Shirwac, a Diplomat and Head of Development Partnerships at Somaliland Mission in Kenya responds to Plus News questions on Somaliland’s cause for recognition.

Many people mistake Somaliland for Somalia, what is the relationship between the two countries?

Somaliland and Somalia are completely two different but neighboring countries in the Horn of Africa who are also different in terms of history, geographical location as well as political situation.

The Republic of Somaliland is the former British protectorate and shares borders with Ethiopia to the south and west, Djibouti to the west, Somalia to the east and the Red Sea to the north. These borders are the most vivid and clearly demarcated borders in the world based on International treaties between the colonial masters.

Somaliland is the 12th African nation to become independent from the colonial with an official Royal Proclamation of her Majesty Queen Elizabeth II. This means Somaliland became independent way before 42 African countries.

Soon after the Somaliland independence from the British rule, 34 countries recognized our nation as an independent state, including members of the Security Council, but after only 5 days, our people decided to voluntarily unite with the next door Somalia when they received independence from Italy to create the Somali Republic.

The dream was to have a greater Somali Republic in the horn, waiting for other Somali inhabited territories including Djibouti, North Eastern Province of Kenya and Somali region of Ethiopia to join the Union and that’s the reason the Somalia Flag still have the White star at the middle with Five edges, each edge represents the 5 territories that Somali people permanently inhabit.

Unfortunately the first marriage between the first two Somali states failed. Although it was never legal and there was NO union act ratified by joint parliament, however, the union was entirely turbulent and unsatisfactory.

After 31 years of difficulties, injustice, inequalities, and prejudice, that union ended horribly with 11 years of War against Somalia’s military regime which claimed the lives of a quarter of a million of the Somaliland people after civilians were shelled and cities were bombed and leveled it to the ground by the military.

In 1991, Somalilanders defeated and destroyed the military deployed to their land by the military government, declaring their withdrawal from the failed union they have been part of, for more than 3 decades.

This is where the miraculous and phenomenal African success story starts, and the most democratic country in east Africa begins its extraordinary journey.

Now, Somaliland is arguably the most democratic and politically stable nation in the Horn, despite all the instabilities across the region. Somaliland has had series of democratic election, since 1991, which international observers termed as Free, fair and credible elections.

Five different presidents have been elected since 1991 where sometimes an incumbent president lost the race and transferred power peacefully. Another historic electoral incident happened in 2003, when a candidate won the presidential election with a margin of only 80 votes against his contender, which is actually the least margin in the history of global democracy.

Somaliland has it’s own flag, currency, passport, government system, public institutions and national army who fully control the territory of our nation.

In the history of Somaliland, there was only one major incident of terrorism, and not a single occurrence of piracy has ever been recorded in the territorial waters of the Republic of Somaliland.

Are you therefore saying that Somaliland has never been part of Somalia?

This are not the first countries in Africa to unite and then divorce. Senegal and Gambia made the same union in 1982 to build what was then called Senegambia and separated after several years, where every country takes back his original name.

That’s why we have both Senegal and Gambia in the AU and other international platforms. Egypt and Syria did the same in 1958 and established what was named as United Arab Republic until Syria withdrew from the union.

Now, we have Egypt and Syria as separate international nations. Therefore, The Republic of Somaliland is sovereign, peaceful, democratic country in the Horn of Africa, unlike the war tone Somalia.

How has the war in Somalia affected Somaliland?

The 30 years long instability of Somalia affected each and every country in the region, and of course, Somaliland is not an exception. Our nation has managed to control terrorism, piracy and other violence from our territory, but we have experienced a huge influx of refugees from these neighboring country.

Your country has for years been pushing for international recognition as an independent State, what is the justification?

The justification is Simple. The Somaliland we have and want recognition for, is the same Somaliland that received independence from Britain on 26th of June 1960.

The Republic of Somaliland is not drawing new borders. We comply the 1963 Cairo agreement of AU member states that African borders to be based on the colonial borders, and above all, our right to self determination gives us the right to first unite with Somalia and then separate from Somalia, and I am sure NO country in this world would want to unite with a country like our neighboring Somalia.

How is Somaliland affected by the lack of this recognition?

I personally believe that recognition only doesn’t bring prosperity. We have many recognized countries in this world with seats in all international platforms which are completely unstable, economically deprived and inflicted with wars and terrorism, and there are other unrecognized countries which are actually an example of democracy and development to the rest of the world.

Somaliland and Taiwan are good examples of such successful unrecognized stories.

Yes, We need recognition to be able to be part of the International platforms where we can contribute a lot to the peace-loving and democratic world.

We need recognition to have access to international financial institutions like IMF and the World bank. However, we are actually doing very fine even with out recognition. The world engages with us as a sovereign nation.

Our capital hosts many diplomatic missions from international friends. We do have diplomatic presence in many countries around the world, including Kenya which I am based in.

We are engaged in international agreements with other countries and companies including UAE, so we are doing really fine, and recognition will come soon. But, even if it doesn’t come, Somaliland will continue thriving with out recognition until the end of this world.

Why has it taken the international community too long, over 3 decades and counting, to recognize the sovereignty of Somaliland?

This question belongs to the international community themselves because Somalialnd has done its part. We have maintained the Montevideo criteria of statehood. We have a defined territory which is built upon the Anglo-Italian, Anglo-French and Anglo-Ethiopian treaties.

We have functioning and forceful government which is democratically elected by the people. We have a permanent population of 5 million and the capacity to enter into relations with other states, as we already have yielding and productive relation with many countries.

Therefore, we are all asking the International community, Why is it taking too long to recognize these African success story.

Don’t you think recognizing Somaliland would undermine efforts to get a functioning government in Mogadishu?

This is really funny question. Has Kenya’s statehood undermined Tanzania’s government? Of course not. It is the vice versa. The Republic of Somaliland would play a pivotal role in bringing peace to Somalia, if Somaliland gets recognition.

We know how to build peace based on our shared culture, and I believe, Somaliland’s recognition will benefit Somalia the most.

Somaliland recently held peaceful and democratic elections unlike in many African countries. What does that speak about your country?

Somaliland’s tradition of democracy is rooted in our culture, and this was not the first time that Somaliland held democratic elections.

We hold elections not to impress the world, but we believe it’s the right way towards good governance and political stability, but it speaks really load to the international world that value democracy and demonstrates that Somaliland is a shining Island of peace and democracy in Africa with many success stories that hardly imaginable to happen in the continent

We recently saw some U.S government officials in Somaliland, does that give you hope that soon you will be recognized?

Somaliland engages with many international friends which we share values of democracy and respect to human rights and America is one of them.

Going forward, what is your call to African governments on your cause?

My call to African governments is the same call that our people has been sending the African Union. The Republic of Somaliland is an impressive success story the entire continent can be proud of, and it’s recognition can be a sustainable solution for the problems of the Horn of Africa.

For a long time now, Africa has been associated with dictatorship and non-democratic attributes. The Republic of Somaliland gives the world a different image of Africa being a place where democracy is practiced and human rights are respected.

If recognized and given its rightful seat at the UN, the Republic of Somaliland will paint a different picture about Africa and indeed will inspire many other African countries towards democracy and respect to human rights.

I also want to remind them about the AU fact-finding mission that visited Somaliland on the 30th of April 2005 and stayed the country for four days.

They made a thorough assessment of the Somaliland situation and remarked in their report that Somaliland’s search for recognition is historically unique and self-justified, as such they recommended the AU to find a special method of dealing with this outstanding case.

As per the AU fact-finding report, there was an evident conviction and emotion among the Somalilanders that their ‘country’ has all the attributes of an independent sovereign State, which they say the international community should objectively consider.

Not only Somaliland satisfied the Montevideo criteria of statehood, but also achieved what most of the African and Arab countries failed to achieve.

In conclusion, as stated by the AU fact-finding mission to Somaliland, the lack of recognition ties the hands of the authorities and people of Somaliland as they cannot effectively and sustainably transact with the outside to pursue the reconstruction and development goals.

The will of the people has to be respected and their accomplishment deserves to be rewarded, but it is never too late. Somaliland’s recognition could be a potential antidote to the problems of the Horn of Africa, and to that of their neighboring Somalia, in particular.