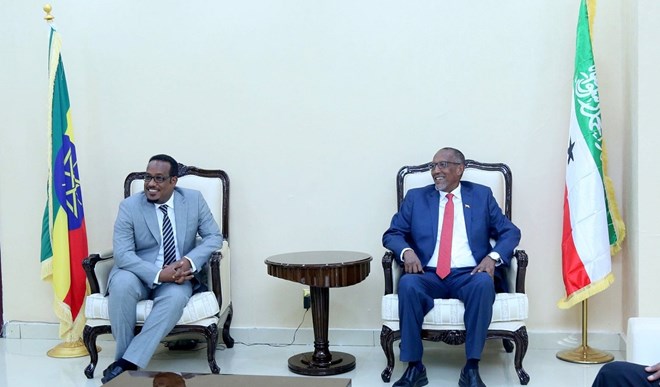 According to a statement released by the President of Federal Government of Ethiopia,  Sahle-Work Zewde, the Ethiopian representation office in the Republic of Somaliland was elevated to the status of an embassy.

According to the statement the former Representative, Saeed Mohamed Jibril, was now promoted to become the new Ambassador in the Horn of Africa republic.

The statement makes the Ethiopian Embassy in Hargeisa the first at such a diplomatic level in the 31-year-old democracy in the Horn as was the first to open a representation office in the country, too.

The promotion of the Ethiopian representative office comes on the heels of a short three-day visit His Excellency President Musa Bihi Abdi made to Ethiopia on January 19. During the visit, President Bihi and Prime Minister discussed ‘issues of mutual interest’ to both countries whose details were not disclosed.

Observers see the swift hop-over of Somalia’s Foreign Minister to Addis Ababa shortly after the announcement was made was not exactly a coincidence. What response the Somalian FM was given on a certain protest to the elevated status of the Ethiopian Embassy office in Somaliland and its ramifications is still under wraps.

Somalia prided itself as a close friend of Ethiopia although this was only manifested in blitz visits which saw resident Farmajo and PM Abiy Ahmed ensconced with Eritrea’s Afwerki which drew a lot of question marks.

Furthermore, Ethiopia has been officially and unofficially involved in Somalia peacekeeping matters since 2007 – a fact that also recorded much opposition and tension among Somalian circles as Ethiopians troops were often accused of gross violations. Ethiopia, during the process, lost a great number of soldiers without receiving much thanks for the loss – or the effort.

In contrast, Somaliland competently formed an impregnable shield to Ethiopia in its eastern and northeastern flanks which saved Ethiopia not only colossal security cost but lives, too.

Somaliland has attracted the attention of the international community by promoting its right to a restoration of its fully independent, internationally recognised statehood before fatefully merging with Italian Somalia in 1960. The latest was a high profile debate at the House of Commons which called the United Kingdom government to formally lead an international recognition of the Republic of Somaliland.

Alongside Ethiopia the United Kingdom, the United Arab Emirates, Turkey, Djibouti, Taiwan and Kenya have offices representing them in Hargeisa.