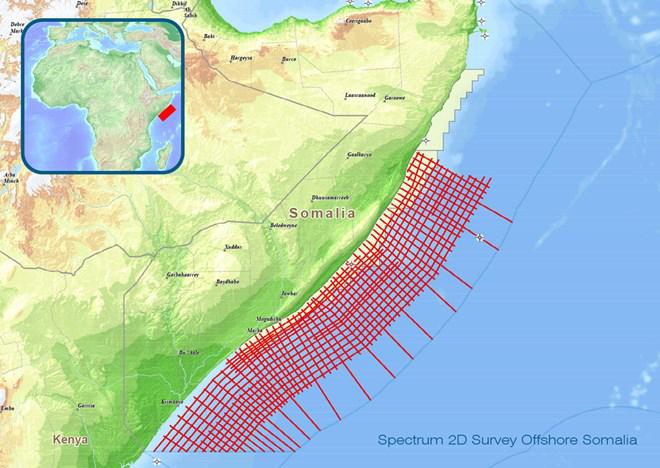 I joined and was present from the inception of Somalia’s Petroleum Process 2005 on a high level position, when the petroleum process began in 2007, we agreed that, in order to avoid corruption, blocks would be awarded only through a bidding process, and that I would be in charge of setting it up. I contacted IHS, one of the best companies, to help us with a bidding round. They agreed.

In addition, I had to draw the blocks and prepare seismic shooting in order to attract investors. Therefore, I needed a company that would take the risk to invest $15-20 million to shoot seismic and sell the data to companies interested in the bid round.

I first approached Schlumberger, which had shot seismic for Total in south Somalia, but they declined. I then contacted Spectrum (later sold to TGS from the United States), where I met John Hall, who became one of the project’s pillars alongside Dr Hussein Ahmed.

The Minister of oil signed an agreement in Dubai with Spectrum to shoot seismic but shooting was only to be done later in 2014.

To do the bidding round, IHS wanted $1 million which we did not have. Total shot seismic using WesternGeco (Schlumberger) in the early 2000 but as per the terms of the Petroleum law, they could not claim anything as they signed an agreement with the Transitional Federal Government (TFG) before Prime Minister Ali Gedi. So, I proposed we continue to work with Total if they would fund the bidding round and train the Somali petroleum engineers, it was agreed upon. I then approached Total and they too agreed.

The bid round process was then ready, and I had to settle the cases of the previous license holders. First, I asked Tom Valentine of Mc Leod Dixon (which was later acquired by Norton Rose in 2012) to contact Chevron in the United States, which had blocks in Somaliland. They stated that they were uninterested. I then contacted Shell/Exxon, who confirmed their interest and indicated a willingness to renegotiate. Following that, I spoke with Conoco, ENI, and BP, all of whom confirmed the same.

So, I began working with Shell, and we came to an agreement in early 2013. ENI continued to act as if they were the masters of Somalia, refusing to answer directly but confirming their interest. Shell, BP, and Conoco even sent letters to the new “companies” that signed illegal agreements with Federal Member States enclaves rather than the central authority i.e the Federal Government of Somalia as is the norm worldwide.

We intended to hold the bidding round at the end of 2013, and everything was finally in place. But, behind my back, the soon-to-be Prime Minister directed Jay Park and Abdullahi Haider to draft an agreement with SomaOil, a company represented by Khaire himself. When they signed the agreement in May 2013, the company was not even registered! I was enraged because this was not only out of the norm but also completely illegal and would derail our efforts to ensure that the petroleum development was beneficial to the Somali people.

I checked, and SomaOil had shareholders who were BVI companies concealing the true owners, who were most likely Somali government officials, Khaire, UK, and shady corrupt Lebanese nationals.

This event then stopped discussions with all oil companies, and I resigned from my job because in 2005, I told the then Prime Minister Ali Gedi that if there was any corruption involved I would leave the whole process, but nobody cared as they were interested in fast money. I believe both Abdullahi Haider and Jay Park received a fee of $500,000 from SomaOil.

I originally met Abdullahi at the President’s office in Mogadishu, he was a graduate from the Nancy Engineer School and I asked him to join our team. I made that fatal mistake as he turned out to be inept, corrupt and untrustworthy! I also did the same if not worse mistake with Jay Park, whom I completely trusted.

Eventually, all oil companies halted their discussions with the Ministry of Petroleum, except Shell, and I do not know if they ever ended up signing an agreement. The bid round was also no longer valid.

SomaOil signed the blocks which Total wanted as well as other blocks next to Shell. They had no intention to invest in oil exploration as one well cost $100-150 million. Afterwards, they changed their name to Coastline Exploration and moved to the USA.

But in the meantime, in 2019 and 2020, I was approached by the UK Anti-Fraud office and later by the UK National Crime Agency (NCA), both of which asked me to meet in the UK. But I could not efficiently help them as they wanted evidence for the corruption since they knew there is a lot of prevailing corrupt dealings.

In February 2019, the Minister of Petroleum, Abdirashid Mohammed Ahmed surprisingly asked to meet me in Kuala Lumpur where he was going to see his son. I flew in from Indonesia and we met together with Dr Hussein Ahmed. He said although he knew the SomaOil agreement was wrong but we agreed nonetheless that SomaOil would be invited to the bid round and may be allowed to bid for one or two blocks only if they satisfy the bid criteria. That was a way to clean the mess. I was satisfied and was waiting for the bid round, he seemed to be against Khaire’s actions in protecting Somaoil/Coastline Exploration but it seemed to me that he had no choice but to find a way out.

Then suddenly in September 2019, I received a WhatsApp message from John Hall from Spectrum: “Patrick there is a real corruption issue.”, TGS-Spectrum received a letter from Abdirashid asking Spectrum to give SomaOil all the seismic data they will need for a symbolic price (free of charge) and for me this was it! I asked him what was the value of the “gift” and John responded $21 million. He also intimated he had a copy of the letter announcing the “gift”

I called the UK’s National Crime Agency (NCA) and told them that John Hall had what they were looking for and I asked them to contact John.

In this story, all individuals have higher priorities than Somali interests: Abdirashid has 3 wives and needs more finances to live, so he has to keep his job, John was nearing retirement and needed to find work and he was approached by SomaOil to work for them, then decided not to submit the letter.

It was my last try to set the Somalia oil development straight. Only major oil companies could be invited to the bid round as the costs to drill wells are expensive in deep water. Somalia has lost nearly 10 years because of corruption created by Khaire and his team and it will continue if SomaOil/Coastline exploration are still involved.

If SomaOil/Coastline keep the blocks they have chosen in 2015 which are the highest, prospect blocks, they will only farm them out (keep shares in the blocks and sell the rest to highest bidders), while this should have been done by the Somalia Petroleum Company.

The SomaOil shareholders direct or indirect will get richer and Somalia will not get anything as the Petroleum law has been carefully modified to satisfy their requirements allowing any corrupt government to sign on with them.

But I’m asking myself a question: if SomaOil really had shot the seismic lines, why do they need to receive the TGS Spectrum data?

The head of corruptors is Khaire without any doubt, but he does not work alone. The Minister and Ministry of Petroleum staff knew all of these facts, but they all needed to keep their job for personal issues. John also refused to be a witness because he needed a job. Nobody really wants Somalia to develop oil for SOMALIS!

I have tried to fight corruption all my life in Iran, Indonesia and Somalia, but it always seems to me that corruptors always win!

Patrick Molliere was the co-author of Somalia’s Petroleum Law 2008 founder of the SPC. He is currently the Managing Director at Foster Energy Spore.