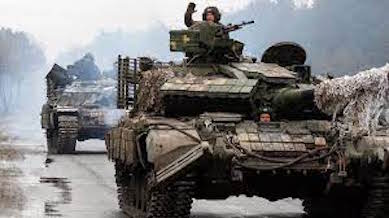 On Thursday morning, Europe woke up to a new reality. A nuclear-armed power launched a full-scale invasion of a neighboring country. Vladimir Putin‘s aim is clear: the end of Ukraine as an independent and democratic state. It is the most dangerous moment our continent has faced since World War II.

Putin has spent the last few months stating that Russians and Ukrainians are one people—part of a single whole. As Russian bombs and shells fall on Ukrainian cities, we see the hollowness of those words. Putin is a tyrant prepared to kill those he declares brothers and sisters to maintain his power.

The Kremlin’s propaganda machine has tried to paint Ukraine as a military threat to Russia. The reality is different. The only threat Ukraine posed was ideological. If an independent Ukraine could develop into a vibrant and prosperous democracy, the Russian people may demand the same. That was not a risk Putin was willing to take. This is the brutal culmination of an eight-year campaign to drag Ukraine back into Russia’s sphere of influence.

So how should the West respond?

First, we must firm up NATO‘s eastern flank. Putin must understand that a single step onto the territory of a NATO ally would be met with an overwhelming response. NATO should signal its intent by immediately deploying its 40,000 strong rapid-reaction force to the Baltic states, Poland and Romania. Finland and Sweden should recognize the new reality in Europe and look to join the alliance without delay.

However, we cannot just throw an iron ring around NATO and leave Kyiv to its fate. Doing so would not only sell out 44 million Ukrainians; it would leave the entire world less secure. History teaches us that appeasing dictators does not work—it only emboldens them. Putin would push on with his attempts to reconstruct the Soviet Union and China would start testing Western resolve over Taiwan.

NATO allies have made clear they will not put boots on the ground. However, all other options must be on the table. Western governments must provide whatever economic support Ukraine needs, and provide whatever weapons Ukraine’s military needs to defend its homeland. Right now, that means anti-tank and anti-aircraft missiles to respond to Russia’s superiority in the air and in armored vehicles.

It is time to take the gloves off with Putin. We should be prepared to make any Russian occupation as costly as possible. We have hybrid capabilities too.

Putin’s regime must be made an international pariah. Russia must feel extreme economic pain for its government’s actions. Although the West has shown important unity on sanctions, they do not go far enough. This is not a moment to pull our punches. Russia should be banned from the SWIFT banking system and cut off from all Western financing and technology. On individual sanctions, we need to stop beating around the bush and target Putin himself.

Russia should face a cultural and sporting boycott. Events such as the FIFA World Cup and the Olympics were a public relations coup for Putin, allowing him to play the role of global statesman. Not anymore. UEFA’s decision to move the Champions League final from St Petersburg is a small step in the right direction, and more must follow.

Putin calculates that in the long term Europe’s economic interests will outweigh political and moral support for Ukraine. We must show that this time is different, and dig in for the long haul. We should take decisions now that will wean Europe off Russian energy supplies.

Putin’s willingness to use military force masks the weakness of Russia’s position. The Russian economy was in turmoil even before Western sanctions started to bite. Brave protests against the war are breaking out in dozens of Russian cities and the outcry will increase as fighting intensifies. A costly and unpopular war will further sap support for Putin’s corrupt regime. The West must pile on more pressure, both militarily and economically. Any outcome other than a free and democratic Ukraine, able to steer its own course, will be a victory for autocrats everywhere.

Anders Fogh Rasmussen was NATO Secretary General (2009-2014) and Danish Prime Minister (2001-2009). Today he is CEO at consultancy Rasmussen Global, and Founder of the Alliance of Democracies Foundation.