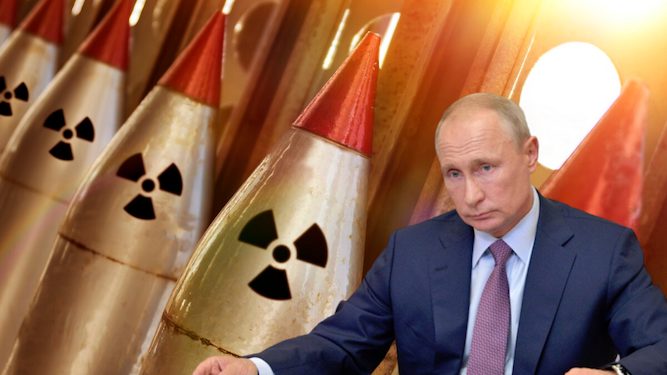 As Russia struggles to conquer Ukraine, Vladimir Putin has moved his strategic nuclear forces to a heightened alert posture.

I suspect the ultimate intent of Putin’s public nuclear threat is to dangle the risk of escalation so as to deter Western unity on further sanctions. This would not be the first time — in October 2020, Russian state media threatened to turn Germany into a “radioactive desert” following that nation’s hosting of NATO nuclear exercises. The pressure worked. Nudged by left-wing elements in his Social Democratic Party, Chancellor Olaf Scholz cooled Germany’s nuclear commitments under NATO.

In Ukraine’s case, Putin’s nuclear threats likely come in his anticipation of massive Russian conventional attacks upon Ukrainian civilian population centers such as Kyiv. Russian forces are struggling to break through determined Ukrainian resistance. Putin’s form in Chechnya and Syria suggests he will attempt to smash Ukraine’s civilian morale and thus its government’s will to resist. But Putin also needs the West to hesitate before further punishing him for the terror yet to come.

Regardless, the risk of a Russian nuclear strike remains very low for two further reasons.

First off, a nuclear strike would not be in Russia’s or Putin’s interest. The Kremlin appears to have been shocked by the significant Western sanctions already imposed upon its economy and against Putin’s person. Yet were Russia to detonate a nuclear warhead over Ukrainian forces or Kyiv, it would likely precipitate total economic isolation. This would have a profound impact on Russian society, likely precipitating mass protests against Putin’s rule and perhaps encouraging a palace coup. Even erstwhile Russian partners such as China would likely be pushed into supporting sanctions in such a scenario, fearing the catastrophic public relations damage of failing to do so. (China has a vested interest in strengthening its relations with the European Union.) Putin may be many things, but he is not stupid. And despite the speculation, I understand that there is no high-quality evidence to suggest that Putin is mentally ill or has otherwise lost his mind.

Second, it is far from certain that Russian military forces would actually carry out a nuclear attack order. Like the U.S., Russian nuclear command and control has traditionally relied upon two- to three-person release protocols to ensure a legitimate nuclear order.

The exact Russian nuclear release protocols are highly classified and unknown but would likely involve both Defense Minister Sergei Shoigu and Chief of the General Staff Valery Gerasimov’s authentication of Putin’s order. While Putin’s more recent centralization of power may have altered these protocols, the general staff would still need to distribute attack orders to nuclear forces. Those forces would then need to carry out the order. That matters because these personnel know that any nuclear strike would entail, as a minimum, catastrophic sanctions and the degradation of Russian military history and honor. In the worst-case scenario, a nuclear strike would risk an escalation spiral that ends with nuclear war against NATO.

Gerasimov isn’t crazy. Nor are most of the security elite around Putin. They know that once one nuclear weapon is used, U.S., British, and French nuclear forces would immediately move to very high alert status. Russian forces would then do the same. The Russians know that this dynamic would greatly exacerbate the risk of miscalculation.

Consider, for example, that Russian ballistic missile submarines are almost constantly shadowed by U.S. and British attack submarines while on patrol. After a Russian nuclear strike on Ukraine, one miscalculation might lead to one undersea battle. Fearing an imminent attack at scale, this might then lead to one nation’s preemptive strike against the other nation’s nuclear assets. This is just a hypothetical scenario, but it illustrates how even the hint of nuclear warfare could lead to a worldwide shooting war. The Russians know this.

The bottom line: Putin and his ultra-hawk spymaster Nikolai Patrushev might support a nuclear strike, but it’s highly unlikely they will order one. It’s even less likely that others in Putin’s inner circle would support it. They would more likely strike him out before agreeing to fire off nukes.