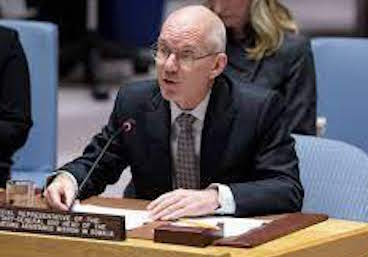 The United Nations on Monday reaffirmed its support for freeing Somalia from explosive hazards and highlighted the impact that the scourge has on the citizens.

James Swan, the UN secretary-general’s special representative for Somalia, said the world body is determined to bolster national capabilities to counter threats posed by explosive devices in a sustainable manner.

“The continued use of improvised explosive devices (IEDs) poses a serious threat to the country and its population,” Swan said in a statement issued in the Somali capital, Mogadishu, to mark the International Day for Mine Awareness and Assistance in Mine Action.

The theme for this year is “Safe Ground, Safe Steps, Safe Home.”

The UN envoy said the contamination by and from explosive remnants of war and landmines resulting from years of conflict in Somalia continues to have detrimental effects on safety and human security and hampers development efforts.

About 500 civilians were killed or injured in Somalia in 2020 due to IEDs and explosive remnants of war; casualties totalled 669 in 2021, he said.

“The United Nations in Somalia remains committed to working with the Somali authorities and partners on mine action, which enables peacebuilding, humanitarian, and socio-economic development efforts while protecting civilians,” Swan said.

The UN in Somalia works closely with national and international mine action specialists in responding to explosive threats faced by communities while enhancing the capacity of Somalis to lead and coordinate mine action responses, he said.

According to Swan, the support includes the provision of explosive ordnance risk reduction, the delivery of survey and clearance activities, victim assistance, stockpile destruction, and advocacy for adherence to the international legal instruments. ■