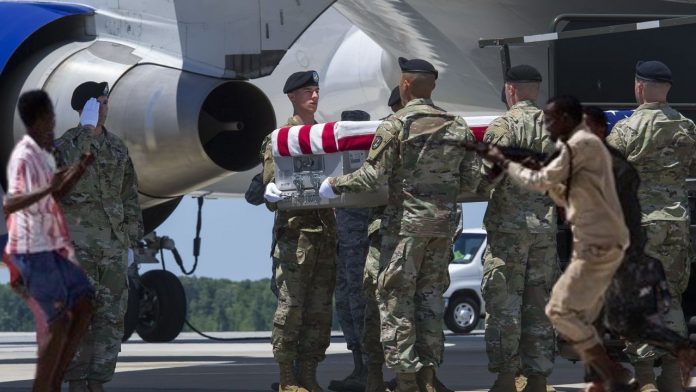 Somalis have enough to worry about. The last thing they need is more war, especially one sponsored by the United States’ War on Terror.

In yet another indication that the Biden administration has no intention to bring an end to endless war, the New York Times reported on May 16th, that the US Africa Command will be redeploying troops to Somalia, and that the White House has approved the Pentagon’s request for discretionary authority to conduct drone strikes in the country.

Somalia has been the target of imperial warfare since December 2006, when the US backed an Ethiopian-led invasion that dislodged the first stable government that had emerged in years. As Ethiopian troops drove the Somali leadership into exile, more militant factions emerged in their place, planting the seeds for the growth of what is now known as al-Shabab. The State Department designated al-Shabab a foreign terrorist organization in February 2008, which provided cover for the Bush administration to begin targeting the group from the air.

Soon after President Barack Obama assumed office in 2009, he authorized US drone strikes as well as the deployment of Special Operations forces inside the country. Then, President Trump designated parts of Somalia as “areas of active hostilities,” and instituted war-zone targeting rules when he expanded the discretionary authority of the military to conduct airstrikes and raids. Southern Somalia was then subjected to an unprecedented escalation of US drone strikes, with between 900-1,000 people killed between 2016-2019. All of this occurred without the US ever formally declaring war on Somalia.

President Biden has clearly decided to maintain Trump’s “flexible” approach to drone warfare in Somalia—one that gives military commanders in the field more latitude to make decisions, requiring that they obtain consent from the State Department’s chief of mission rather than the White House. As such, analysts assessing the temporary lull in drone strikes last year were correct to interpret it as an artificial lull, as the Biden administration’s pledge to engage in a comprehensive review of the government’s policy on drone strikes clearly did not stimulate an ethical reconsideration of the use of drones.

What the Biden administration has done is draft new laws and procedures, offering safeguards against civilian bystander deaths that purport to provide protections for adult men as well as women and children. In this sense, the Biden administration is continuing prior administrations’ use of the law as a tactic of war, referring to the introduction of new laws and policies in order to suggest that the US makes more of an effort to limit civilian casualties, even as it employs deadly force. As historian and law professor Samuel Moyn observes, the idea that war can somehow be fought humanely has become central to American liberalism, with fewer and fewer Americans questioning the decision to wage war itself.

In the meantime, racialized depictions of Somalia as a war-torn country with the alleged potential to threaten US interests are instrumental in maintaining public support for renewed commitment to war. AFRICOM Commander General Stephen Townsend claims that al-Shabab is “bigger, stronger, and bolder,” even if its exact capabilities are “an open question.” What this assessment is based on is unclear. Just as US officials did in the lead-up to the invasion of Iraq in 2003, AFRICOM’s strategy appears to be a simple one: repeat the claim of a purported threat often enough, and—absent critical questions from the press—it becomes truth.

In light of AFRICOM’s stated plan to enhance the capacity of its partners to target al-Shabab, Congress and the American public should raise questions about these very partners, from Bancroft Global to the Danab Brigade and AMISOM (recently replaced by the African Union Transition Mission in Somalia—or ATMIS), whose collective roles in exacerbating the violence have been widely documented.

The Danab Brigade was established in 2014 with initial funding from the US State Department that paid for the services of Bancroft Global, a private security firm that trained and advised the unit. Since then, it has also received funding and training from the Department of Defense. AFRICOM’s reliance on surrogate forces such as the Danab Brigade is made possible by the 127e program, a US budgetary authority that allows the Pentagon to bypass oversight by allowing US special operations forces to use foreign military units as surrogates in counterterrorism missions. The Intercept has documented similar 127e operations in multiple African countries, primarily in locations that the US government does not recognize as combat zones, but in which US troops are present on the ground.

Ironically, the New York Times reports that the Biden administration’s deliberations about next steps in Somalia have been complicated by political chaos on the ground, implying that the US somehow stands outside and above seemingly local factions and loyalties. But a closer and more critical look would reveal that the US military and its private security partners are deeply implicated in this chaos, as business and security interests are irretrievably entangled on both sides of Mogadishu’s green zone.

Gun prices soared in advance of Somalia’s presidential elections last weekend as anxious Mogadishu residents worried about prospects for instability. It is no coincidence that many of these guns arrived via a loophole in a UN arms embargo that permits the distribution of weapons to the Somali National Security Forces in the name of training and security sector reform. This is not the first time that arms intended for security purposes have been diverted to the black market, and in light of the Biden administration’s decision to double down on its commitment to endless war, it likely won’t be the last.

Somalis have enough to worry about as food prices skyrocket with the shutdown of global supply chains, and as the worst drought in four decades affects more than  seven million of the country’s inhabitants. The last thing they need is more war.

Africa Is a country