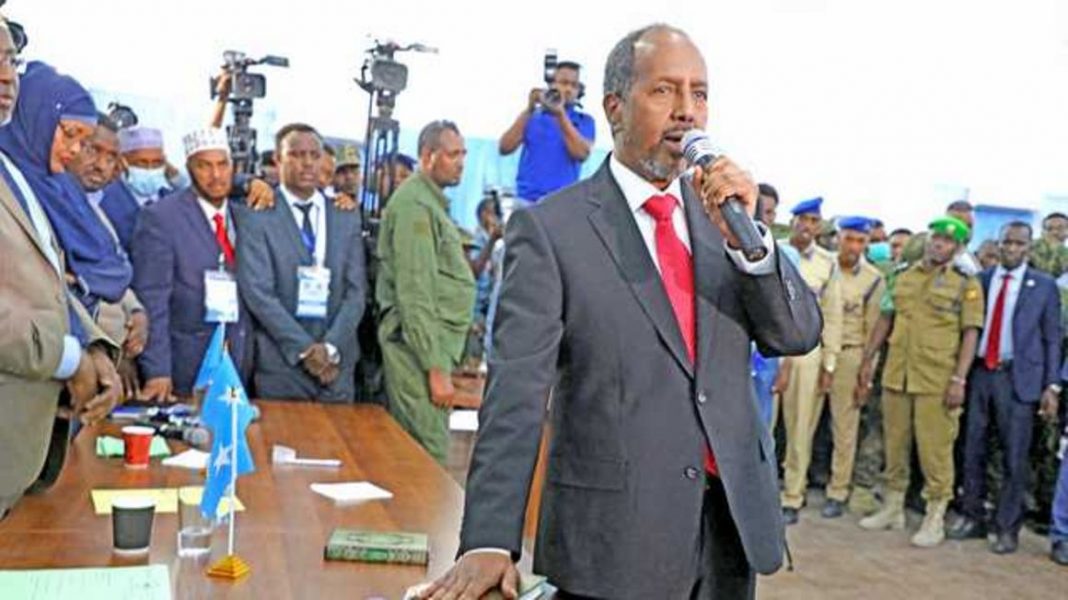 Somalia’s new president, Hassan Sheikh Mohamud has promised to renew relations with neighbouring countries and international partners in what he calls ‘‘a constant pursuit of peace” with the world.

President Mohamud, inaugurated on Thursday in Mogadishu, will however have to first dispense with the ghosts of the regime he is succeeding, if he is to focus and succeed in his agenda.

Even as he addressed regional leaders – Ethiopian PM Abiy Ahmed, Kenya’s Uhuru Kenyatta and Djibouti’s Ismael Omar Guelleh — diplomats and other dignitaries who attended his inauguration in Mogadishu, ghosts of the former regime were not far off, with a public finger-pointing interview by ex-intelligence chief Fahad Yasin fired controversially last August, being televised on his first day in office.

President Mohamud, not new at Villa Somalia having been president in 2012-2017, says he understands the mistrust of government by Somalis, promising “to lead them to a better future.”

But he will first need to calm a potential storm. Disgraced ex-intelligence chief Yasin gave a tell-all interview to a local TV station, Gaylan Media, on Thursday, accusing Prime Minister Hussein Roble of replacing him with Mahad Salad, a man whose record was dirtier. Mr Yasin did not elaborate.

Mr Yasin was disqualified from running for a parliamentary seat and his suit against the government for his dismissal at the Supreme Court was also later dismissed on a technicality. The timing of the interview may have been curious, but it was indicative of what Mr Mohamud must do as Prime Minister Roble is certain to quit the post since he hails from the same clan as the president.

The intelligence falling out was precipitated by the disappearance and death of spy agent Ikran Tahlil whom Mr Roble later claimed had been killed by al-Shabaab. Her body has never been found.

Her death could possibly haunt President Mohamud’s administration as her family is still demanding answers on her death, and the matter ruined relations between Mr Roble and then president Mohamed Farmaajo.

On Thursday, Mr Farmaajo, his predecessor Sheikh Sharif Ahmed and President Mohamud held hands in a show of unity.

“I urge all my fellow citizens to support and pray for his success. I would like to express my appreciation to everyone who contributed to smooth and peaceful elections,” said Mr Farmaajo, after the inauguration.

Nonetheless, President Mohamud vowed to embark on a rebuilding for the country, including dealing with immediate problems for the country now under constant attacks by al-Shabaab and a gripping drought and starvation threating the lives of more than seven million people.

As he took the mantle of power for the second time, Mohamud vowed to reconcile the country’s divided political groups, as well as make right relations with neighbours following years of diplomatic tiffs. He met with Kenya’s President Uhuru Kenyatta later in the evening, pledging to open diplomatic channels that will address lingering disputes between their two countries.

For Kenya, a troops contributor to the African Union forces in Somalia (ATMIS), Somalia’s stability means security for Kenyan citizens too.

“A peaceful, democratic and stable federal republic of Somalia means a peaceful, secure and prosperous republic of Kenya and a peaceful East African Community, Igad and Horn of Africa region,” said Kenya’s Defence Cabinet Secretary Eugene Wamalwa, who attended the afternoon bilateral meeting in Mogadishu, held after the inauguration.

Among those accompanying the Kenyan President was Peter Munya, the Agriculture Cabinet Secretary, who had been in bad books in the past when Mohamud led the country between 2012 and 2016.

Munya, then Governor of Meru had reached out to Somaliland to have them buy miraa under a promise he could lobby for their independence. Somaliland is a region north of Somalia which declared own independence 30 years ago but is unrecognised globally.

Ethiopian PM Ahmed received a standing ovation when he greeted the guests in Somali language. Ahmed’s delegation included ethnic Somali officials in Ethiopia, and included vice chairperson of the ruling Prosperity Party, Adem Farah, the Federal Finance minister Ahmed Shide as well as Security Advisor of the Prime Minister Redwan Hussein and president of the Somali Region, Mustafa Omer Agjar, among others.

President Mohamud said he will continue consulting with Somaliland over the status of their future as a federal region of Somalia, indicating dialogue will be his tool. He also said that his country will remain neutral in the international space, while befriending countries that will respect its sovereignty and seek to tackle common problems like the al-Shabaab terror and poverty.

“The event that we are witnessing today {inauguration} is a specimen of democracy being reinstituted in Somalia,” he said, stressing that except when the country was run, for 21 years, under the military rule (1969 – 1991), Somalis had always had democracy in mind.

He said reconciliation and peaceful coexistence was going to be his government’s priority. “To achieve true reconciliation, we are going to address whatever is being felt by citizens,” he said.

“An important instrument that will boost reconciliation is to complete the review and implementation of the provisional constitution,” the president said, adding that democratisation is to return power to the people by allowing citizens to elect and get elected.

On the ongoing drought effects, he said; “We cannot continue surviving months of delivering water to drought-affected people, following by rescuing people affected by floods,” calling for better action.

He promised to work on making state institutions accountable and addressing the national debt with international financial institutions.

Somalia’s governance is wanting at both national and federal, corruption is endemic and al-Shabaab militants are still a major threat, even firing mortars at the airport ahead of the inauguration.

By AGGREY MUTAMBO and ABDULKADIR KHALIF
The East African