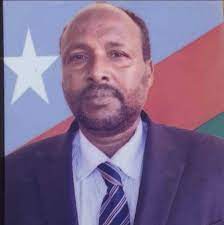 A Minister, his son, escort staff, and unspecified members of the public were today killed by a suicide bomber targeting the Minister in Baidoa of the Southwest Federal State of Somalia.

The bomber, reports state, hit the Minister for Justice of the federal state, Hassan Ibrahim Lugbur, and his entourage at a time they were leaving a mosque where they performed the noon Jum’a prayers.

According to the reports, another of the slain minister’s sons is in critical condition and is being treated for injuries sustained in the hit at Baidoa Hospital along with 11 more victims.

As of this moment, no group has claimed responsibility.

The state president, Abdi Aziz Lafragaren, however, blamed the militant al-Shabaab fighters for the killing.

For over a week now, the Islamist group has been waging sustained attacks on outposts and stations manned by Ethiopia’s liyuu Police in areas bordering the Southwest federal state and that of Hiiraan of Hirshabelle state and Jubaland to the south.

Conflicting reports have come out of the most recent of these attacks which happened at Atto early Friday morning.

Gruesome images which the Group published, however, show a number of Liyuu Police bodies strewn around or killed in their ditches and a few others hastily scampering away from the scene.

Federal Somalia security forces are still shored up by contingents of regional and international troops and security personnel following the downfall of the military regime in 1991.

In contrast, the Republic of Somaliland, formed of the former British Protectorate before its ill-fated merger with Somalia in 1960, has neither foreign forces nor extremist fighters in its territory. Somaliland was termed as the most stable, most democratic state in the Horn of Africa for the past three decades.