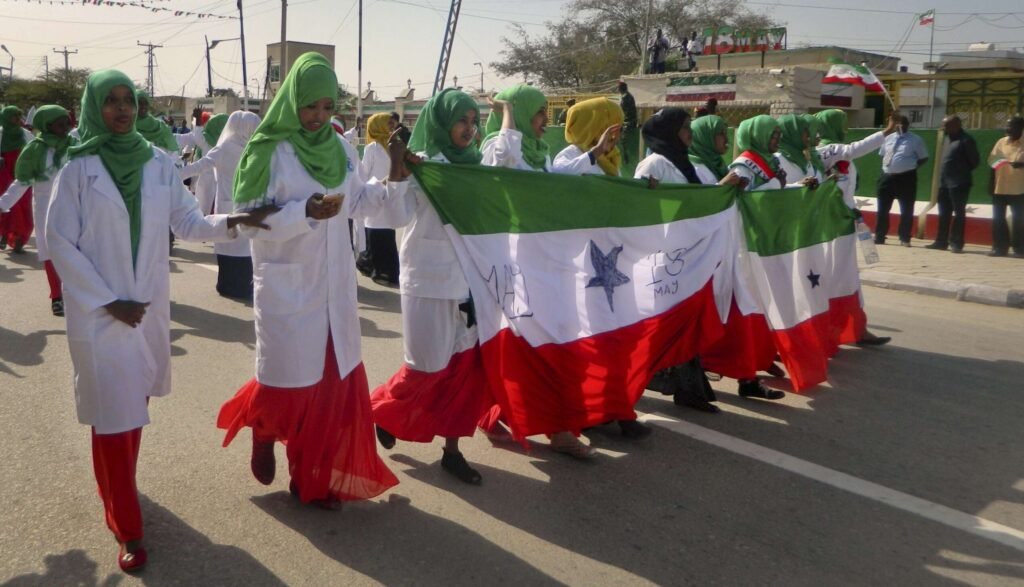 Not much happens in Hargeisa, Somaliland’s capital, but that’s how most residents prefer it.

The main attraction is a memorial with a Somali Air Force jet that bombed the city during the territory’s independence war in the 1980s. There is another featuring the replica of a tank, beneath which goats sometimes lounge as traffic passes by.

“Nearly all the buildings you see in Hargeisa today are new,” says Ayan Mahmoud, Somaliland’s former diplomatic representative to London. “The city was bombarded so heavily there was barely anything left.”

This year marks 31 years since Somaliland broke away from Somalia in 1991. Many Somalilanders relish pointing out that this is longer than the period of time – just over three decades – that Somaliland was part of Somalia, following independence from Britain in 1960.

I don’t like to talk about it because, every time I remember it, it makes me feel sad.

The union only ended after a bitter conflict that left tens of thousands dead and ripped apart families, as refugees fled over the border to the safety of camps in Ethiopia. Roughly 75% of the population was displaced, according to one estimate.

The legacy of this war is still keenly felt, as Hargeisa’s monuments attest.

“It was a very harsh time,” says Anab Jama, a market trader in Hargeisa. “I don’t like to talk about it because, every time I remember it, it makes me feel sad.”

Today Somaliland has most of the trappings of a modern nation state. It has a parliament, holds elections, and maintains its own military. Somalilanders drive cars with Somaliland license plates and shop with Somaliland shillings — even if the universally accepted American dollar is more popular and the tax system is patchy.

Somaliland is also much more peaceful than Somalia, which is grappling with Al-Shabaab’s long-running Islamist insurgency and seen by some observers as a failed stated.

By contrast, there has not been a terrorist attack in Somaliland since 2008, when suicide bombers targeted the Ethiopian consulate, a UN building and the president’s office. That is partly due to heavy spending on defence and intelligence, which eats up 35% of the budget.

In May 2021, the territory held parliamentary elections that saw an opposition party win a majority. A month earlier in Mogadishu, rival factions had engaged in deadly clashes over former President Mohamed Abdullahi Mohamed’s failed attempt to extend his stay in office.

Yet no countries recognise Somaliland, over which Somalia still claims sovereignty.

This is partly out of fears of offending Somalia, seen as a crucial cog in the West’s global fight against terrorism. In addition, some African countries fear that recognising Somaliland would encourage other regions, such as Puntland, to break away from Somalia, potentially leading to the balkanisation of their own countries.

A foreign official says their government would only recognise Somaliland’s sovereignty if African countries do so first, “which doesn’t look likely soon.”

Making the case for independence

In outlining their case for sovereignty, Somalilanders are quick to draw distinctions between their territory and their bigger neighbour.

“Somaliland deserves to be recognised as a state separate from the chaos and violence of Somalia,” Somaliland’s foreign minister, Essa Keyd, tells The Africa Report.

Recognition would not set a legal precedent for the rest of Africa as we already have legal borders defined by the colonial British administration.

Keyd points out that Somaliland “was a country before Somalia” – it gained independence from Britain on 26 June 1960 as the State of Somaliland, which existed for five days before it chose to unite with Italian Somalia, which became independent on 1 July 1960.

Divisions between the two former colonies appeared almost immediately, with most Somalilanders voting against the new constitution in 1961, which they saw as marginalising their territory in favour of Mogadishu. Relations deteriorated further after Siad Barre seized power in a coup in 1969 and imposed an authoritarian state.

“Recognition would not set a legal precedent for the rest of Africa as we already have legal borders defined by the colonial British administration” says Keyd. “We became independent and joined the union voluntarily, and then we saw that it did not work.”

we thought we would eventually join together with all five Somali regions – in Djibouti, Ethiopia, Kenya – and that we would become one united country, but that did not materialise.

Keyd likens Somalia’s continued claim over Somaliland to “picking up someone while you’re driving, and then they claim your car is theirs afterwards.”

He adds: “We are a democracy and we deserve to be recognised as people who, in this part of the world, stand for democratic values, human rights and as a country that is very stable, whereas our neighbours are volatile. We are a piece of land where people can come and visit and companies can invest and feel free.”

Shukri Bandare, the environment minister, tells The Africa Report that Somalilanders chose to unify with Somalia “because we thought we would eventually join together with all five Somali regions – in Djibouti, Ethiopia, Kenya – and that we would become one united country, but that did not materialise.”

The cost of dependence

Somaliland’s lack of recognition means it cannot directly access funding from international organisations such as the International Monetary Fund and the World Bank. Financial support from the United Nations is routed through Mogadishu, which sometimes withholds funds. As a result, Somaliland leans heavily on its large diaspora.

We hardly receive a dollar from the UN system. Everything we have, we’ve had to build ourselves.

“The UN has poured billions and billions into Mogadishu, but they cannot even maintain order, there is no proper government,” says Mohamed Dualeh, Somaliland’s special envoy to the UN. “We hardly receive a dollar from the UN system. Everything we have, we’ve had to build ourselves.”

In April, a huge fire devastated Hargeisa’s Waheen market, causing an estimated $2bn in damage and wiping out 40-50% of the city’s economy, according to Somaliland’s Chamber of Commerce, Industry and Agriculture. The UN has pledged to help Somaliland rebuild, but so far has committed little in the way of funds.

Somaliland officials are confident that Somaliland’s sovereignty will be recognised eventually. The territory is keen to exploit its strategic position on the Red Sea and it is currently building a large deep sea container port at Berbera with hundreds of millions of dollars in investment from Emirati firm DP World. Officials say it will rival Djibouti as a gateway to Ethiopia.

READ MORE Will Somaliland’s Berbera port be a threat to Djibouti’s?

“It is huge for Somaliland,” says Keyd, the foreign minister. “We will become the new logistical entry point to east Africa. It will accelerate our economic development and our foreign diplomacy…the more people and companies that come here to invest will open the door for further engagement and our recognition as a country.”

Last year Kenya became the ninth country to set up a diplomatic mission in Hargeisa, alongside states including the United Kingdom, Turkey and the United Arab Emirates. The United States meanwhile is exploring the feasibility of a defence partnership with Somaliland.

Dualeh says these developments make it “inevitable” that Somaliland will be eventually recognised.

“They are interested in the Red Sea and we want recognition—both sides have something the other wants, and that gives us a little leverage,” he says.

A foreign official says Somaliland may benefit from waiting “a decade or two” before its sovereignty is internationally recognised, to give the territory’s institutions and economy time to develop. Otherwise, “they all might start fighting among themselves without the independence cause to bind them.”

We claim we are a democracy, but there is information the government is unwilling to share.

Although Somaliland officials like to promote their territory as a beacon of democracy in a troubled region, the authorities have an authoritarian streak that could hinder their case for sovereignty.

In June, the information ministry banned BBC Somali from operating in the country. The decision followed a phone call between the information minister and a BBC staff member who said the service would not hold its 65th anniversary in Hargeisa out of security concerns, according to a senior Somaliland official. Two months earlier at least 15 journalists were arrested for reporting on a prison riot.

A young man who did not wish to be named, says freedom of expression is limited.

“We are not protected when it comes to free speech,” he says. “We claim we are a democracy, but there is information the government is unwilling to share.”

Clan disputes, meanwhile, often lead to lengthy election delays, with last year’s parliamentary poll held more than a decade late. Activists also say Somaliland lags behind on the issue of women’s rights, with only one female minister and no female members of parliament.

In December 2020, the sports ministry banned a women’s football tournament from going ahead, saying it was against the territory’s Islamic values.

“It was a big disappointment,” says Amuun Qawdhan, who organised the tournament. “The ministry had previously said it was fine, as long as there were no  photos or videos. But two or three hours before it was due to kick off, they issued a cancellation.”

Qawdhan added: “It is very challenging for us as women. Our power and opportunities are very limited.”

Yet most Somalilanders are proud of their territory and keen to promote its achievements, despite its flaws.

“We should absolutely stay independent of Somalia,” says Halimu Abdullahi, who works in Hargeisa’s market. “We will never get back together with them.”