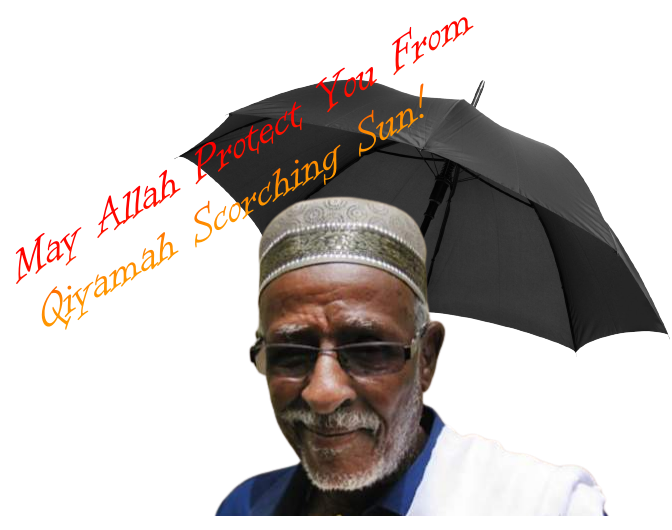 Hadraawi was widely regarded as the greatest living Somali poet – dubbed by some as the Shakespeare of Somalia.

Born in (1939) in Togdheer, he was known to Somalis by his nickname Hadraawi, meaning “the master (or father) of speech”.

The poet had been ill for some time.

His early work was broadcast across the region and in the 1970s he wrote poems that were critical of Somali President Mohamed Siad Barre’s government.

He ended up being imprisoned for five years for the work.

After his release, he went into exile in Djibouti, but continued his political criticism through a series of poems that were memorised and widely recited.

After the collapse of Somalia’s central government in 1991, Hadraawi led a caravan for peace, which tried to promote understanding and reconciliation across the Somali regions and the diaspora.

People have been sharing their condolences online:

Hadraawi died in a hospital in Hargeisa, the capital of the breakaway region of Somaliland, after battling ill health for the past seven years.

The poet, who composed dozens of songs and epics in verse, spent five years in prison during the military dictatorship of Siad Barre for criticising the regime.

Following his release, he moved to Ethiopia, where he joined the opposition Somali National Movement before travelling to Britain and finally relocating to Somaliland, where he was a popular presence at literature workshops and seminars.

“This is shocking and a great loss, I want to inform the Somali speaking people anywhere and the world about the death of poet Hadraawi, and that we ought to pray for him now,” Somaliland president Muse Bihi told a press conference in Hargeisa.

“I send my condolences to the Somaliland people and to all other Somali-speaking people anywhere in the world, we will prepare his burial,” he added.

“May God have mercy on poet Mohamed Warsame Hadraawi, he was one of the Somali intellectuals who spent efforts in contributing to the awareness of Somali people and their literature,” Mohamud said in a statement.

“Sending my heartfelt condolences to the people of #Somaliland and to all #Somalis for the loss of Mohamed Ibrahim Warsame “Hadrawi”, an iconic poet and one of the most eminent and beloved Somali poets of all time,” Walker said on Twitter.

Hadraawi had no surviving children and his wife died earlier this year.

One of nine children, Hadraawi was born in Somaliland’s second largest city Burao and moved to Yemen when he was 10 years old.

He returned to Somalia after the country became independent in 1960 and began working at the state-run station Radio Mogadishu before achieving success as a poet.

In 2012, he was awarded the Dutch Prince Claus prize for his body of work. The Amsterdam-based foundation praised him for “interweaving striking imagery and metaphor with philosophy and social commentary.”

“At his charismatic recitals, audiences revel in his mastery of classical and colloquial language and his experimental use of metre and alliteration,” the Prince Claus Fund said, announcing the 100,000 euro ($101,000) prize.

“Hadraawi is honoured for creating profound and beautiful poems that enrich and expand the centuries-old oral poetry tradition that is central to contemporary Somali culture and identity… and for building bridges, providing inspiration and promoting peace through poetry.”

Somaliland and Somalia have a long oral storytelling tradition.

Somaliland declared independence from Somalia in 1991 but the move has not been recognised by the international community.