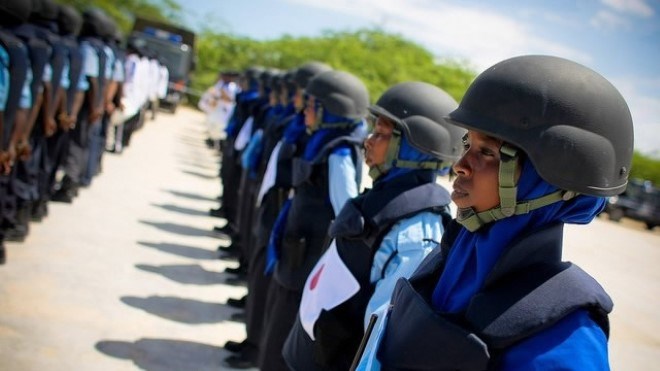 The African Union peacekeeping mission in Somalia has trained and mentored some 8,167 Somali police officers since the first deployment in the country in 2009, a senior official said

The African Union peacekeeping mission in Somalia has trained and mentored some 8,167 Somali police officers since the first deployment in the country in 2009, a senior official said.

The African Union Transition Mission in Somalia (ATMIS) Police Chief of Staff, Rex Dundun said the recruited and trained police officers are now enforcing law and order in areas liberated from al-Shabab control in the country.

“We have only a short time to prepare Somalia’s police to handle its internal security. It is a race against time,” Dundun said in a statement issued in the Somali capital Mogadishu on Thursday evening.

It’s anticipated that the Somali Security Forces (SSF) will take over security responsibilities from the AU mission by December 2024.

The trained and mentored Somali police officers are from Jubaland, Hirshabelle, and Southwest, including Mogadishu.

As part of its infrastructure improvement initiative, the AU official said the ATMIS Police have constructed, renovated, and equipped about 20 police stations.

Dundun said the AU Police has assisted with efficient policing, setting up specialized desks in police stations and developing police human resource databases at the federal and state levels.

He said the AU Police deployed personnel to areas that had no police presence, such as Barawe, Garbaharey, and Dhusamareb as part of the operational support during the elections.

“The aspiration and goal are for the Somali Police Force to be able to take over the internal security of Somalia by December 2024,” Dundun said.

The National Security Architecture (NSA), endorsed by the government and the federal member states in 2017 recommended a police force of 32,000 personnel.

In line with the NSA, Somalia aims to recruit a sufficient number of police personnel not only to enforce law and order but also to secure liberated areas and population centers.

ATMIS Police are mandated to provide training, on-the-job mentoring, and advice to the Somali Police Force.

The training also focuses on building capacity and recruiting young officers to replace the older ones.