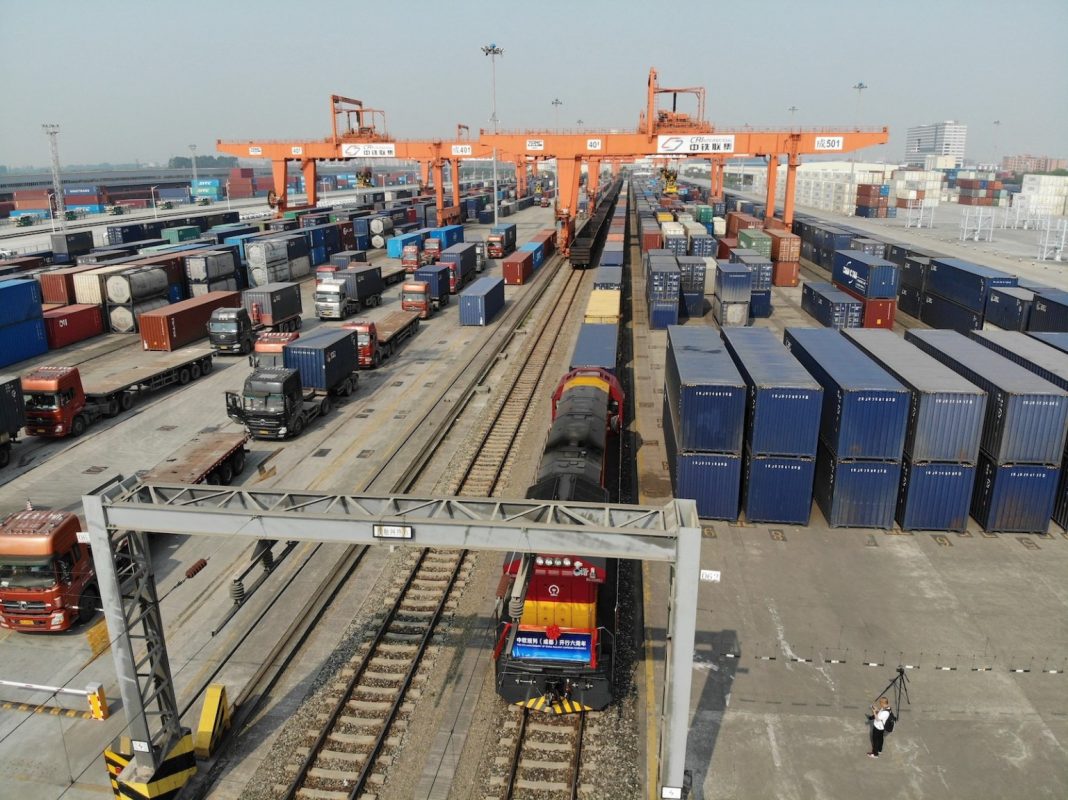 In the past 10 years, China has built more than 100,000 kilometers of roads and railways in Africa. The massive project is part of the Belt and Road Initiative, a China-led global network of physical and digital infrastructure.

Among the African BRI projects is the completion of Trans-African Highway 5 (TAH5). The highway connects Dakar in Senegal to the Chadian capital N’Djamena. TAH5 will ultimately reach Djibouti on the Horn of Africa, 8,700km east of Dakar.

China’s investment in African infrastructure is part of a larger global Chinese infrastructure blueprint. Chinese companies are building roads, ports and railways throughout Asia, the Middle East, and South America.

The BRI includes not only roads and high-speed rail lines but also hydropower plants, tourism developments, hospitals, mines, pipelines, IT infrastructure, and even legislative buildings. Zimbabwe’s new US$140 million parliament building was constructed by China.

It takes self-confidence to conceive a global civil infrastructure project across several continents. China committed more than a trillion dollars to 13,000 projects in more than 150 countries. Participating countries include military dictatorships, theocracies, and democracies.

One of the jewels of the BRI is the Mohammed VI Bridge in Morocco, the largest such bridge in Africa. The China Construction Industry Association awarded the Chinese builder of the bridge the prestigious Luban Prize. Lu Ban, an ancient architect, is the patron saint of Chinese builders.

China is able to finance the BRI thanks to external trade. Its trade surplus with the US alone is roughly a billion dollars a day and with the European Union about $300 million a day. Part of this massive surplus is recycled into BRI projects, with Africa one of the largest recipients.

Cobus van Staden, a China-Africa relations expert in Johannesburg, points out that the Chinese have shown that it is possible to build large infrastructure projects in the continent and that the BRI has improved investor confidence. He notes in a paper on China’s investment in the TAH5 project:

“I would argue that the success of these early developments broke down entrenched biases against funding African infrastructure among a wider range of funders. This could potentially speed up the completion of a connection between East and West Africa.”

Apart from recycling dollars and euros, China benefits from access to African resources while creating markets for its solar panels, telecom technology, and a host of industrial and consumer goods. China has replaced the US and the EU as Africa’s largest trading partner.

The BRI is also linking China’s domestic infrastructure with the ASEAN countries Indonesia, Vietnam, Myanmar, Cambodia, Malaysia and Thailand. Labor and other costs in China are rising, and Chinese manufacturers will start outsourcing production to Southeast Asia as well as to Africa.

Conceived just 10 years ago, the BRI now encompasses the entire Eurasian continent, from eastern China to Western Europe. Among the major trunk lines:

The Western media, preoccupied with Ukraine, largely ignored this month’s meeting of the Shanghai Cooperation Organization in Samarkand, Uzbekistan. The SCO is one of several political overlays of the BRI. Its members are China, India, Pakistan, Kazakhstan, Kyrgyzstan, Tajikistan, Uzbekistan, and a recent member, Iran. Turkey, rebuffed by the EU, has indicated it will also join the SCO.

The SCO emphasizes sovereignty and mutuality. Its political outlook resembles that of the 1955 Bandung Conference, the Asian-African meeting of states that had just gained independence from Europe. It led to the formation of the Non-Aligned Movement in 1961.

A second political overlay of the BRI is BRICS, a grouping that comprises Brazil, Russia, India, China and South Africa. Founded in 2009, the group now includes dozens of aspiring members, including most states in the Organization of the Petroleum Exporting Countries (OPEC).

BRICS was formed after the financial crisis of 2008. The dollar-dominated monetary market collapsed after the subprime mortgage crisis in the US and raised questions about the reliability and sustainability of the dollar system. Developing an alternative to the dollar system is high on the BRICS agenda.

The West was late in recognizing that the BRI could be a proverbial game-changer. It initially dismissed the BRI as a “Chinese project,” and claimed it was a debt trap. But that appears a case of projection.

As of 2020, Chinese public and private lenders accounted for 12% of Africa’s $696 billion external debt. The rest is largely owned by Western creditors – and typically carries a higher interest rate.

Since the 1960s, the West has poured considerable development assistance into Africa, to little or no avail. It didn’t lead to economic growth or higher African living standards.

Peter Bauer, a British development economist and well-known critic of the Western aid model, has called traditional development aid “a transfer of resources from the taxpayer of a donor country to the government of a recipient country.”

In December 2021 the European Commission (EC) decided to follow the Chinese example. It announced the “Global Gateway” and proposed to spend €300 billion in the next five years to finance infrastructure projects around the world.

With its characteristic missionary zeal, the EC positioned the Global Gateway as an ethical version of the BRI. The Commission said:

“By offering an innovative choice for global infrastructure development, based on the needs of our partners, Global Gateway will be an investment in international stability and cooperation. Global Gateway can demonstrate how democratic values provide certainty and transparency for investors, sustainability for partners and long-term benefits for people around the world.”

In June this year, the US joined the fray. Meeting in southern Germany, the US, Canada, Germany, Japan and the other member nations of the Group of Seven launched the “Partnership for Global Infrastructure and Investment.” It aims to raise $600 billion for global infrastructure projects in low- and middle-income countries in the next five years.

Given developments in Ukraine, the world should not hold its breath that a Western version of the BRI will be rolled out any time soon. Western countries will have to spend hundreds of billions, if not trillions, of dollars and euros to contain the damage caused by isolating themselves from Russia.

Low-cost Russian energy now flows to Asia, which will make it even more difficult for Europe to compete with the East. The high cost of energy could force energy-intensive European industries to move to Asia, the US, or Africa.

Jan Krikke is a former Japan correspondent for various media, former managing editor of Asia 2000 in Hong Kong, and author of Leibniz, Einstein, and China (2021