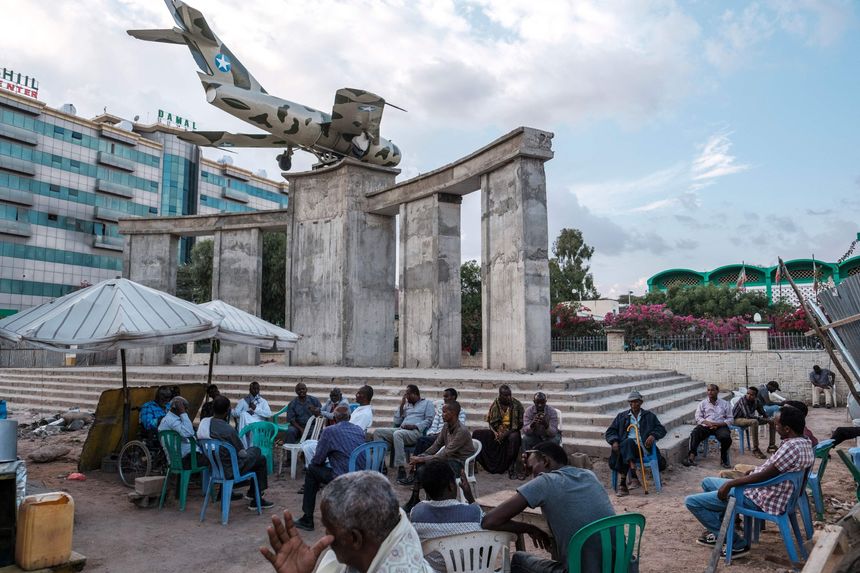 Hargeisa sees Washington as a potential, powerful ally as it seeks international recognition for its 32-year-old government

Somaliland, a peaceful corner of violent Somalia, is offering the U.S. military use of a seaport and airfield overlooking strategic maritime routes in exchange for steps toward recognizing the region as a sovereign country.

Hoping to capitalize on growing U.S. concern over Chinese expansionism in Africa, Somaliland President Muse Bihi Abdi is planning a March visit to Washington, where he is expected to explore American interest in using the facilities in Berbera. The city sits on the Gulf of Aden, a key route linking the Indian Ocean, Suez Canal and Mediterranean Sea.

“The president would definitely welcome a U.S. presence and protection of the waterways,” Somaliland Foreign Minister Essa Kayd said in an interview.

For decades, Somaliland, a former British protectorate in northwest Somalia, has been conducting a fruitless campaign for international recognition as an independent state. But the latest push comes at an opportune moment.

There is growing disenchantment in Washington with the U.S.-backed Somali national government in Mogadishu, which has delayed elections, become mired in political squabbling and, despite two decades of U.S. military assistance, failed to quash al-Shabaab, an al Qaeda affiliate that has vowed to attack American interests in Africa and elsewhere.

That disillusion with Mogadishu, along with concerns about internecine warfare in neighboring Ethiopia and the recent military coup in Sudan, are contributing to a groundswell of sympathy on Capitol Hill for Somaliland, which stands out in the region for its democratic elections and peaceful streets.

“The continued instability in the Horn of Africa and heightened global competition for resources and influence make it all the more important that we work with like-minded partners in the region, like Somaliland, committed to peace, democracy, and prosperity,” said Idaho Sen. Jim Risch, the ranking Republican on the Foreign Relations Committee.

The Biden administration is sticking with the long-held U.S. position that Somalia—which is riven by clan and regional divisions—should remain intact. Some African governments are reluctant to do anything that might encourage breakaway movements in their own countries.

Somalian President Mohamed Abdullahi Mohamed, who has put off elections for more than a year and tried to extend his own term in office in the interim.Photo: FEISAL OMAR/REUTERS

At the same time, American diplomats have made no secret of their frustration with Somali President Mohamed Abdullahi Mohamed, who has put off elections for more than a year and tried to extend his own term in office in the interim.

In its closing days, the Trump administration pulled hundreds of U.S. commandos out of Somalia, where they had been training local forces to fight al-Shabaab, and moved them to neighboring Djibouti and Kenya. The Biden administration has yet to announce whether it will return American troops to bases in Somalia.

The debate over Somaliland’s future comes as the U.S. and China jockey for influence in Africa.

In 2017, China opened its first overseas military base in Djibouti, adjacent to Somaliland, on the Bab el-Mandeb strait, a critical choke point between the Red Sea and Gulf of Aden. The Chinese base, which U.S. officials say is big enough to dock an aircraft carrier and nuclear submarines, sits just 6 miles from the largest U.S. military base in Africa, Camp Lemonnier, which houses 4,500 U.S. troops.

Although it has shown no signs of wanting to do so, Djibouti could legally ask the U.S. to close its base at any time, leaving the American military scrambling to find another location.

U.S. intelligence agencies have concluded that Beijing also intends to establish a naval base in Equatorial Guinea, on Africa’s Atlantic coast. Washington considers such a move especially threatening and is trying to persuade Equatorial Guinea’s government to reject Chinese overtures.

Somaliland authorities see that superheated great-power competition as an opening to secure the international status they have long sought.

“If China occupies our country by force or by other means, then the waterways are going to be controlled by China,” said Mr. Kayd, the Somaliland foreign minister.

Somaliland became independent from Britain in 1960, a few days before Somalia, then a trust territory administered by Italy, gained its own sovereignty. Dozens of countries recognized Somaliland before it entered into a union with Somalia.

That union crumbled in the late 1980s, when Somalia’s strongman president, Mohamed Siad Barre, faced an uprising. His military bombed Hargeisa, Somaliland’s capital, and killed tens of thousands of Somalilanders.

In 1991, Somaliland declared its independence, issuing its own currency and setting up its own army. Since then, the region has avoided much of the Islamist and clan violence that has racked southern Somalia.

Mogadishu, which faces separatist sentiments in several states, has rejected Somaliland’s efforts to secure recognition as a sovereign state. Negotiations have failed to find a middle ground.

Somaliland has already signaled its preference for inclusion in the Western camp.

Somaliland swapped diplomats with Taiwan in 2020, a slap at Beijing, which considers the island part of China, and an overture to China hawks in the U.S. “All of the sudden people who cared about China but didn’t care about Africa perked up and paid attention,” said J. Peter Pham, a former senior U.S. diplomat.

In August, when U.S. forces pulled out of Afghanistan, Somaliland offered to host thousands of refugees who had sided with the U.S. and were now fleeing the Taliban. The State Department declined the offer.

That same month, a U.S. transport plane landed in Berbera carrying dozens of American military personnel who conducted an assessment of the port and airfield, according to local and U.S. officials. The runway is among the longest in Africa and at one point was designated an emergency landing strip for NASA’s space shuttle.

The Emirati logistics company DP World owns 65% of the port, with Somaliland retaining 35%, according to the Somaliland government.

The U.S. military has “Djibouti but you want to have a Plan B, and Somaliland would be a wonderful Plan B,” said Tibor Nagy, who led the State Department’s Africa diplomacy during the Trump administration.

In November, Mr. Kayd, a U.S. citizen and former neuroscientist at Boston’s Brigham and Women’s Hospital, visited Washington to work the halls of Congress.

The following month, a group of senior U.S. congressional aides visited Berbera and Hargeisa—a deliberate effort by Somaliland’s American allies to build momentum on the Hill.

In London, pro-Somaliland lawmakers held a parliamentary debate last month in which they pushed for recognition, but U.K. policy remains that Somalis themselves must decide on any separation.

Somaliland authorities admit they are unlikely to win widespread recognition and a seat in the United Nations soon. Instead, they and their allies in Washington are seeking interim measures that would deepen direct dealings between Somaliland and other governments.

“Instead of recognition, our main goal is engagement,” said Mr. Kayd.

Last year, Mr. Risch, the Idaho senator, introduced legislation requiring the Pentagon to study the idea of two-way defense cooperation between the U.S. and Somaliland, bypassing Mogadishu. The amendment didn’t pass, but Mr. Risch intended it to start discussions in Washington.

Other Somaliland allies suggest the U.S. could provide aid directly to Somaliland.

“Somalia is an absolute disaster,” said Mr. Nagy. “And then you have this little country that’s making headway.”

This article was first published in February 2022. This is a reprint.