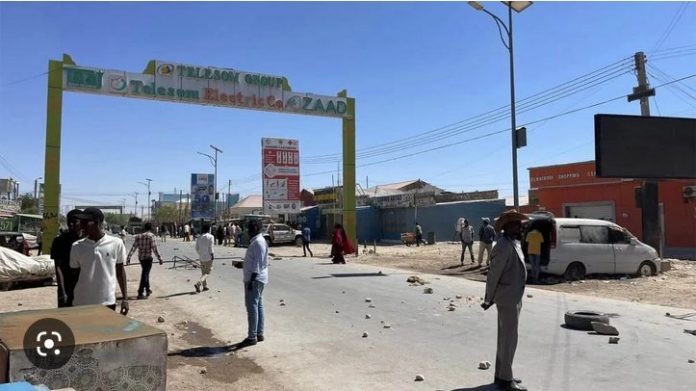 The government of the Republic of Somaliland, according to a Ministry of Foreign Affairs statement, is aware that external elements and terrorists wish to turn Las Anod into a safe haven from which to launch destabilization operations detrimental to regional security.

“The government of Somaliland is determined to prevent extremist groups from establishing a haven for terrorists aiming to incite violence in the Las Anod community,” the statement, addressed to the international community said.

“This is not the first time external extremists groups have organized and attempted to destabilize the Las Anod town of the Somaliland Republic and, by extension, the region. In different instances, the agitators have used extremists as tools to spread misinformation and propaganda that incite violence in the Las Anod town,” the statement added.

“The government of Somaliland reiterates its commitment to cooperate with the international community to maintain peace and security in the Horn of Africa region,” it said.

The government statement further pointed out that the violent protests that erupted in the provincial capital Somaliland’s Sool region on a day voter registration was supposed to begin in the region aimed to derail the country’s maturing democracy and its election process.

“The timing of the most recent assassination coincides  with Somaliland’s ongoing voter registration process in parts of the Sool region as the incitements exploited public mourning in Las Anod. Such malicious intentions had intended to discredit the progress that the Somaliland government has made over the years in the consolidation of peace and security,” the MFA statement underlines.

“The Republic of Somaliland is capable and committed to resolving its internal affairs, as we have done for decades, keeping our peace and democracy alive,” the statement emphasized.

Somaliland, it said, viewed the peaceful settlement of the Las Anod as a top priority as the well being of the city’s residents hinged on it.

The government of Somaliland immediately withdrew from the town troops it brought in to quell the violent protests that claimed not only the lives of several civilians but those of members of the army, too.

The government also allowed in elders of the community, some of whom avowed opponents to Somaliland statehood for the past 30 years to show its readiness to continue rebuilding the region that it started the last few years following its takeover of the region from Puntland of Somalia.

The unfortunate fatalities started an avalanche of overstatements and exaggerations that puffed up the fallen number to 20 and above with international media outlets such as Reuters, the BBC and the VOA inadvertently falling for the detractors’ orchestrated propaganda machine.

An estimated 40 prominent members of the Las Anod community have fallen under the gun of unknown assailants in targeted assassinations since 2009. Twenty-four of them were directly linked to the government of Somaliland some of whom being leading members of the opposition parties. Thirty-two suspects have been apprehended in connection to the killings some of whom found guilty and convicted with reasonable evidences.

A sizeable delegation comprising government ministers and members of the parliament are currently in the city conferring with elders in order to find lasting solutions to both the disturbing assassinations and the violent protests they engender.

The government believes that if citizens do not cooperate with security agencies to ferret out assailants as in other parts of Somaliland, it would be hard for the city or its residents to enjoy a sustainable degree of the peace and tranquility envisaged. 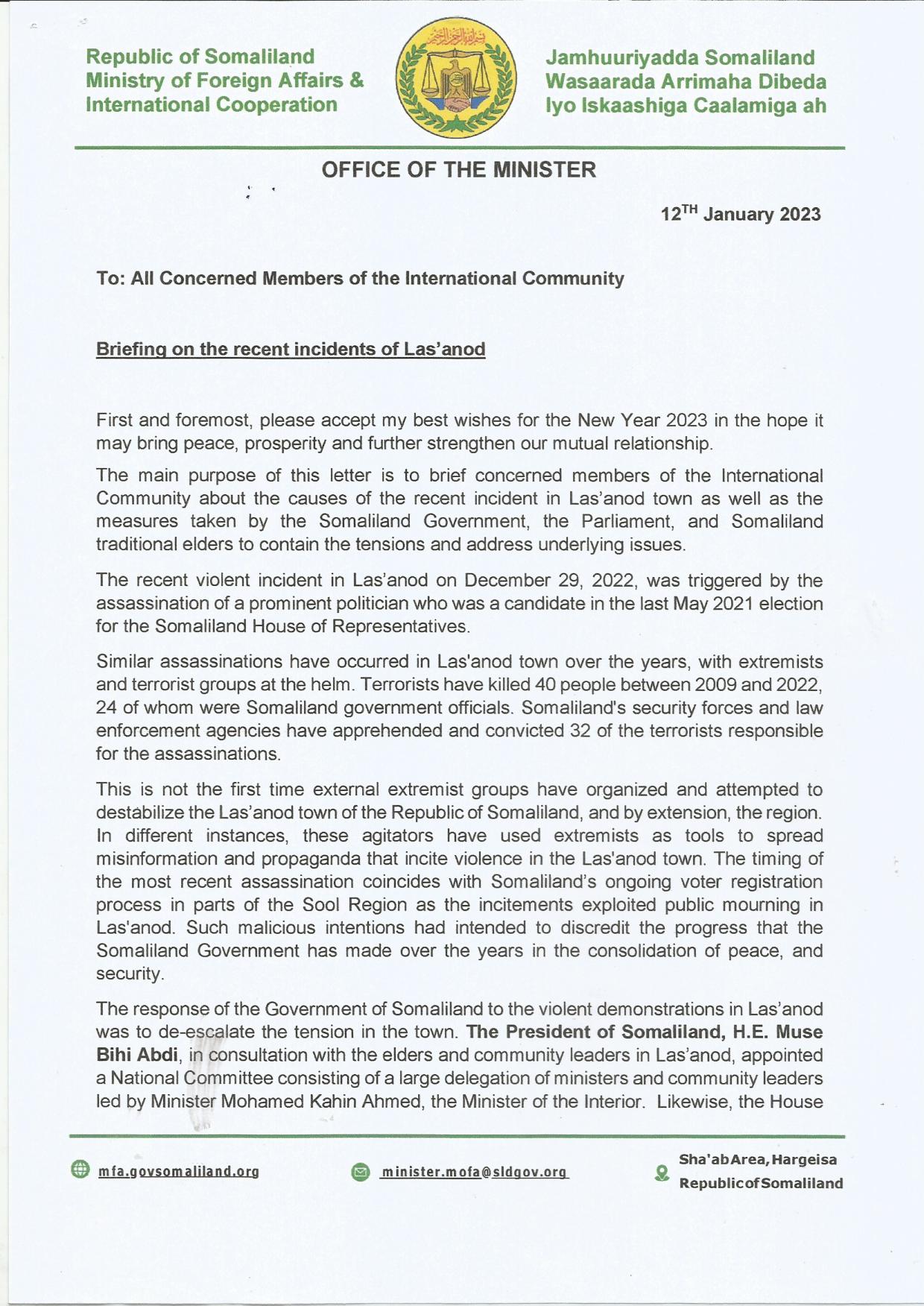 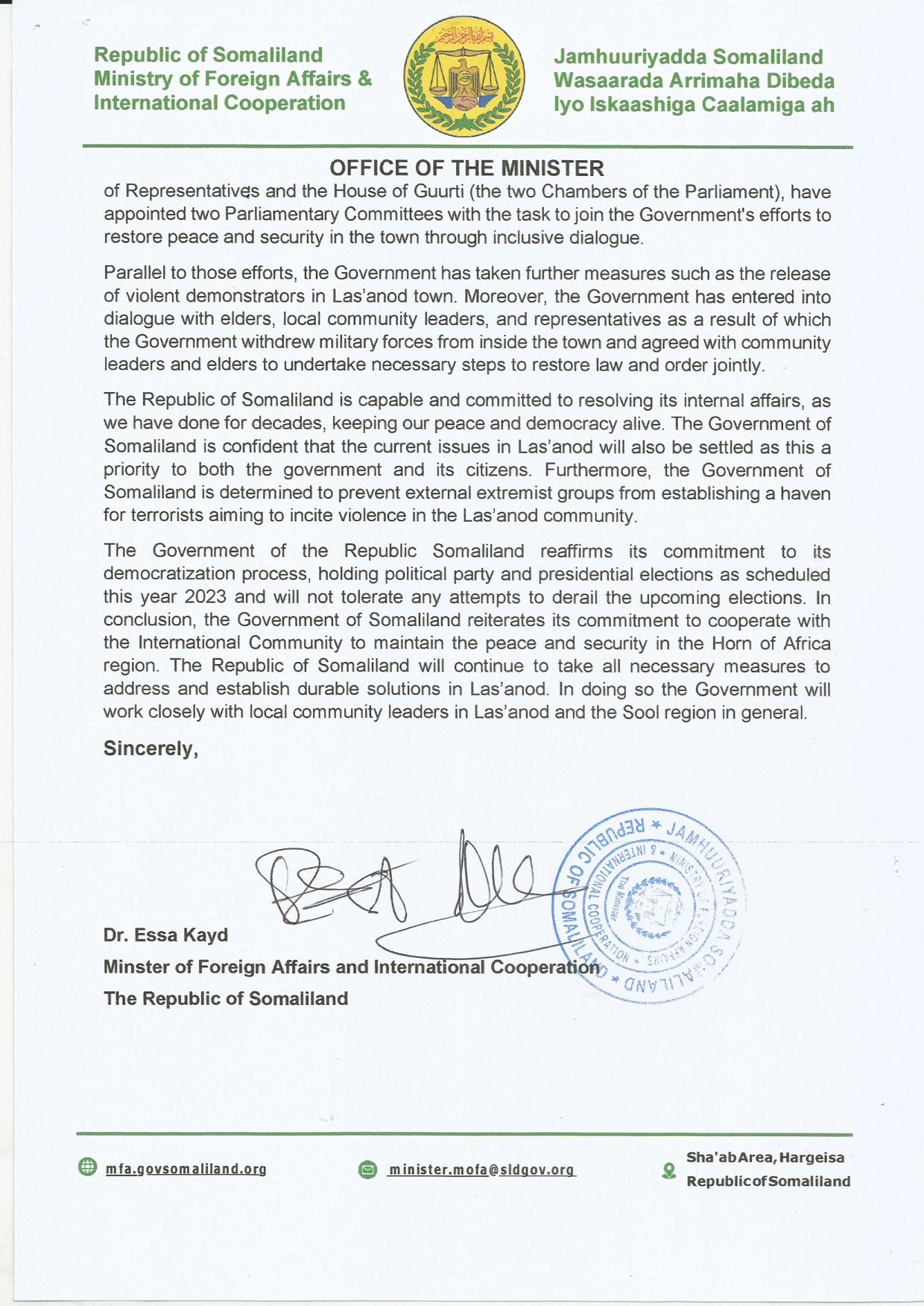