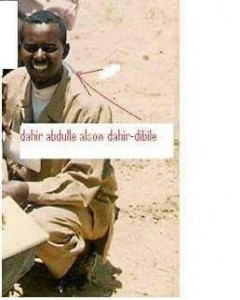 Bested and beaten on legal and professional grounds, a self-anointed, former highway robber going by the name of Alasow, crowns himself a journalist and flails out at every one not towing his tattered, self-revealing kind of blackmailer philosophy and narcissism. Not only is that but none outside of his twisted soul is worth anything in his eyes. With him none of the figures and organizations all Somalis revere is safe – unless, again, they keep their purses open and visible to him.

The Alasow under discussion is a Machiavellian character, a devil in disguise, a chameleon that is one thing in one minute and a totally different one in the next: a devil incarnate indeed.

If I use so many unflattering adjectives, it is because that the character in question defies rational description.

A Tactic Among many

Whenever a writer or a journalist writes favorably of anybody or any institution that he has his teeth sunk into, he cries ‘foul’. Regardless of the reputation social standing or byline fame of the writer he invariably spouts forth badly written, venomous salvos guised as ‘brave coverage’ from a ‘brave journalist’ – words he so shamelessly bestows on himself.

One other tactic he often employs is to draw his victim to a long conversation, lulling him/her into false security. The objective is two-fold: to glean as much personal information as possible from the victim itself and to enlist him/her to act as his ears and eyes on another possible subject that he can pressure into a side settlement and a silencing bank envelope. He, all the while, keeps all the conversations and the agreements reached over the tape so the victim himself/herself does not renege on the ‘relationship’ forged by fear of exposure. The more unguarded statements , the tighter the noose one places on own neck for use by Alasow.

Victims that succumbed under this tactic include formidable artistes (Saado, Nimo Jama, etc.), ‘politicians’, business people, budding journalists and staff members of Somali governments – some of whom hold or held very senior positions in intelligence and security.

Others constantly brushed by his soiled brush include the Somaliland people, government and cause, the Darood, Dahabshiil, Qaran, and every one that is better than and pure.

For what reason is he doing this?  For material gain, of course.

Not has Alasow futilely tried to blemish the good names of personalities and institutions that are living icons for Somalis everywhere, but his audacity is beyond the realms of sane reasoning. By promoting evil and spurning all that is good and heart-warming in Somalis and their desire to move forward, he believes he can improve his material means by extorting money in exchange for his silence. But like any other short-lived motive, his blackmailing does not go far. Nor does his ill-concocted lies and besmearing campaigns. The latest onslaught came out on a number of his satellite, so-called websites (or so he calls them to mesmerize unwitting Europeans) such as one called the Sunatimes, Galmudug, kaydmedia, and so on. It was against one of the brightest, upcoming bynames in journalism: Jamal Osman of Channel 4, UK. He uses without fear of impunity or fact Jamal’s picture. Using photo editors, this Alasow puts Jamal’s picture in the hands of a fictitious, nonexistent, mob vociferously demonstrating against the journalist.

Did this happen? No. Is it a true picture? No. Does he have a right to do so? No.   Is Europe blind to his antics? No. Can he be indicted for actions like this? Yes. Can Jamal take him to court for damages? Yes. Can his host country make him answer for his sins – one way or the other? Yes.

Under Article 19 of the Universal Declaration of Human Rights, one has the right to freely express oneself. That of course does not include defamatory, seditious, incensing material that either infringes on another’s right to privacy, life, education, health, right to do business, etc. as it does not condone words and/or actions that aim to torture, blackmail and invade the myriad of basic rights that an individual is entitled to enjoy among peers.

Unwaveringly, the annals of European history all point to a great sense of responsibility Europeans showed throughout the years to administer justice and to ensure that all subjects on its respective soils enjoyed equal rights in the eyes of the law, and that none unduly lived off the other by through blackmail, bullying, raising false hue and cries, testifying/writing against another for personal gain, etc. Europe had always found a way to collar in perpetrators of such crimes, sooner or later serving them their just desserts.

The Europe of today may not be the Europe of old, but it is certainly not a Europe that is as lawless as it appears to be.

There was this checkpoint lord called ‘Ox’ in the early nineties. He was a heartless boor. The word mercy never crossed his heart. Neither a baby girl, a boy nor a granny escaped his rape. No pedestrian ever crossed his checkpoint without being relieved of all possessions – clothes and even tattered rubber sandals. To him the hoot of a car was the signal of a festivity beginning.

If he found any one holding on to mobile, a few bank notes, a gleaming watch or a purse/bag, a bullet in the head settled the issue. He seldom trusted his minions to finish the job. It was to be him: he only completely trusted himself.

To save his bullets if he could, he devised one of the most coldblooded, pitiless tests.  To quickly divest his victims of everything on them, the Ox would first put them through the grueling test.

The test comprised of a corpse half-covered by a piece of stained cloth, a subdued victim and wild, loud shrieks of ‘laughter’ from the Ox’s camp. It went this way. The Ox would save a male corpse from his last killing and lay it a few matters away from the actual checkpoint, its back to the checkpoint. Whenever somebody obstinately held on to one or two items that the Ox did not wish to spare or when a pedestrian did not stop pleading with him for mercy, he would point to the corpse and ask the terrified victim to go plead for the item with the ‘chief’. Of course, nobody would have guessed that the ‘chief’ was a putrefying, lifeless corpse.

Cowed and frightened, victims would hesitantly approach the seemingly sleeping ‘chief’, and start pleading for their possessions or lives on trembling voices. The figure, of course, would neither answer nor even move a muscle, until the victims turned blue on the face. Bundled in a knot, the Ox and his gang would be watching and giggling with mirth all the time.

As soon as one did that, pandemonium would break loose: the shrill cry of the victim, seeing the caved in, half open head of the corpse, the burst of fresh hoots and body-slaps of the armed robbers and the hopping, howling, crying pedestrians and motorists told to step down off their vehicles being frisked and grilled in short queues.

None present would think of nothing else but escape with his life – if possible!

The Ox was none other than Dahir Abdulle Alasow, a.k.a. Dahir the Ox.

The Best Little Country You Have Never Heard Of

Somaliland: Goodbye Genius Hadrawi: the Scholar of Philosophers, and the Philosopher of Scholars