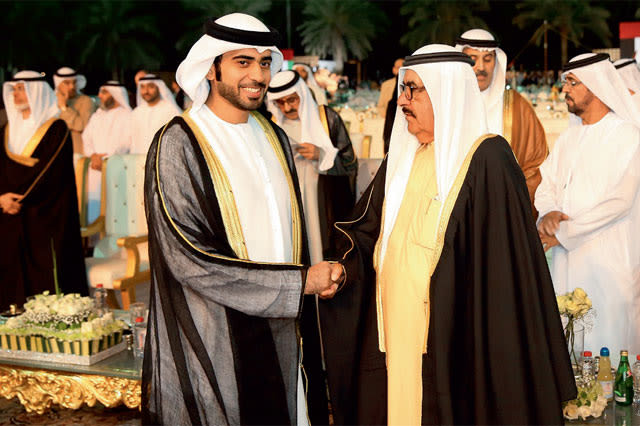 The young couples were married in the eighth mass wedding hosted by the Dubai Electricity and Water Authority (Dewa) for its staff.

Thirty seven Emirati couples were married in a joyous and happy atmosphere at a massing wedding ceremony held at Zabeel Park in Dubai on Wednesday.

A number of folklore and traditional activities and dances, including Al Ayalah, Harbiya, Al Razfa,and Al Liwa as well as congratulatory poems for the newlyweds pumped up the celebrations. The young couples were married in the eighth mass wedding hosted by the Dubai Electricity and Water Authority (Dewa) for its staff. Known as Anwar Dubai, the ceremony was held under the patronage and in the presence of Shaikh Hamdan bin Rashid Al Maktoum, Deputy Ruler of Dubai, UAE Minister of Finance and President of Dewa.

The move is part of Dewa’s commitment to support its staff by giving them peace of mind and a good start in life. Shaikh Hamdan was received by Dewa’s board members and Saeed Mohammed Al Tayer, MD and CEO of Dewa.

The ceremony was also attended by senior officials from various government departments and a large number of guests. Mass weddings, Al Tayer said, have become a national tradition, with the numbers increasing each year. Dewa is following the same path.

“During the past eight years, a total of 323 couples tied the knot at Dewa’s mass weddings. Through this initiative, and as part of our corporate social responsibility, we underline our commitment to serving society.”

He added that the staff look forward to participating in the mass wedding, which has been named Anwar Dubai. “Each year, our Emirati male and female staff participate in the mass wedding and start their new lives and form new Emirati families that look forward to a joyous and prosperous future. With all gratitude and appreciation, they thank Shaikh Hamdan for his patronage of the ceremony,” added Al Tayer.

On behalf of Al Tayer, Khawla Al Mehairi, Vice-President of Marketing & Corporate Communications at Dewa, and Chairperson of Dewa’s Women’s Committee presented the new couples with gifts from the sponsors.

“The gift is for 37 young Emirati couples to encourage them to get married, alleviate their financial burden and make their lives easier,” said Al Tayer.