North Korea on Monday fired two short-range ballistic missiles into the sea and warned of “merciless strikes” against its enemies as allies Seoul and Washington launched annual military drills Pyongyang claims are preparation for a northward invasion.

North Korea regularly conducts such test firings of missiles, rockets and artillery, and they are often timed to express the country’s dissatisfaction with actions by Washington and Seoul. Monday was the start of military drills that will run until the end of April. 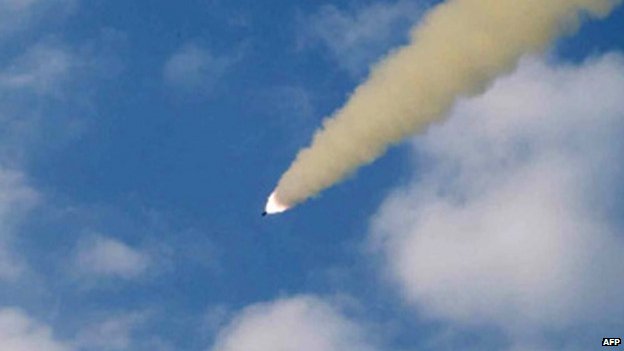 Early Monday morning, two missiles launched from North Korea’s west coast flew about 500 kilometers (310miles) before landing in waters off the east coast, according to South Korea’s Defense Ministry. Spokesman Kim Min-seok called the launches an “armed protest” against the South Korea-U.S. drills and a challenge to peace on the Korean Peninsula.

The annual U.S.-South Korean military drills inevitably lead to angry North Korean rhetoric, although the allies say they are purely defensive. The North’s rhetoric is meant to show its people that a tough leadership is confronting what its propaganda portrays as outside hostility, but analysts also believe the drills infuriate because they cost Pyongyang precious resources by forcing the country to respond with its own drills and launches.

“The only means to cope with the aggression and war by the U.S. imperialists and their followers is neither dialogue nor peace. They should be dealt with only by merciless strikes,” an unidentified spokesman for the North Korean military’s general staff said in a statement carried by state media.

He said the U.S.-South Korean drills are aimed at conquering the North’s capital, Pyongyang, and removing its leadership.

During the 2013 drills, tension rose amid North Korean rhetoric that included vows of nuclear strikes on Washington and Seoul.

The rival Koreas earlier this year floated the possibility of holding what would be the third summit between their leaders since the countries were divided 70 years ago. But they have been at odds in recent weeks over terms, and prospects seem dim.

North Korea separately told the U.S. that it was willing to impose a temporary moratorium on its nuclear tests if Washington cancels the joint military drills with South Korea. But the U.S. rejected the overture, calling it an “implicit threat.”

North Korea last year conducted an unusually large number of missile and other weapons tests, drawing protests from South Korea. The North still proposed a set of measures that it said would lower tensions, but South Korea rebuffed them, saying the North must first take steps toward nuclear disarmament.

The Korean Peninsula remains in a technical state of war because the 1950-53 Korean War ended with an armistice, not a peace treaty. About 28,500 American soldiers are deployed in South Korea as deterrence against potential aggression from North Korea.