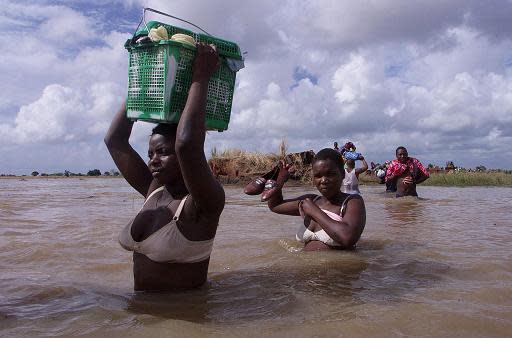 Women are far more exposed to disasters than men given their frontline roles in the home and in healthcare, the UN says, arguing that improving gender equality is key to saving lives.

Globally, women and children are up to 14 times more likely than men to die in a disaster, according to UN Population Fund account executive Lamar Dawson.

“There is a range of reasons,” said Clark, a former New Zealand Prime Minister. “They may be trapped at home, they may be caring for sick or disabled family members, young children.

Clark was speaking as aid agencies and governments scrambled to get help to Vanuatu, where dozens are feared dead after the Pacific nation was raked by a huge cyclone on Friday.

A state of emergency was put in place over the weekend amid reports entire villages had been “blown away”.

The calamity in the Pacific gave greater resonance to the Sendai meeting, which runs until Wednesday, where Clark said policymakers must work on improving the lot of women.

“The issues will (be) how we make sure that women are fully engaged, and (the conference should) argue for women’s empowerment and full equality, because why should they suffer?” she said.

“It’s a huge issue” and has to “be integrated in the Sendai outcome”.

Remi Sogunro, who represents the United Nations Population Fund in Liberia, said women bore the brunt not only of natural disasters like that unfolding in Vanuatu, but in human catastrophes like the Ebola outbreak in West Africa.

“Women are caregivers at home, and when their… families are sick, they take care of them,” he said.

Around 25,000 people are known to have been infected with Ebola since the latest outbreak began in December 2013. Around 10,000 of them have died.

In Liberia, one of the worst-hit countries, thousands of people were infected including 300 health workers, said Sogunro.

“Half of (the health workers) died. Most of them are nurses, some of them are midwives, a few of them are senior medical doctors. Many of these were women,” he said.

“The women were trying to help the country to stop the Ebola virus and they died in the course of duty. So you can see why it’s really very important to talk about women in the Ebola forefront,” he said.

Japanese Prime Minister Shinzo Abe said that even in developed countries like Japan, much more needed to be done to get women more involved in reducing the impact of disasters.

“In all regions of Japan, it was predominantly men who participated in disaster risk reduction drills,” he told the conference, which opened just days after Japan marked the fourth anniversary of the 2011 quake-tsunami that ravaged the northeast coast.

“However, if a massive earthquake were to strike during the day, most of the people at home would be women. A woman’s perspective is therefore essential for community disaster risk reduction efforts,” he said.

But Rachel Kyte, Vice President of the World Bank, said even in a forum like the Sendai conference, where participants agree on the need to empower women, there are few in evidence.

On Saturday she had 11 meetings. “In nine of those meetings I was the only woman,” she said.

“I really think this has to change,” Kyte said. “There are not enough women here, and women’s perspective is not well enough integrated.

“I can’t think of a community… where it isn’t the women who know exactly what’s going on.

“So not to have women in the rooms here is absurd,” she said.

War and Climate Put 49mn People at Risk of Famine