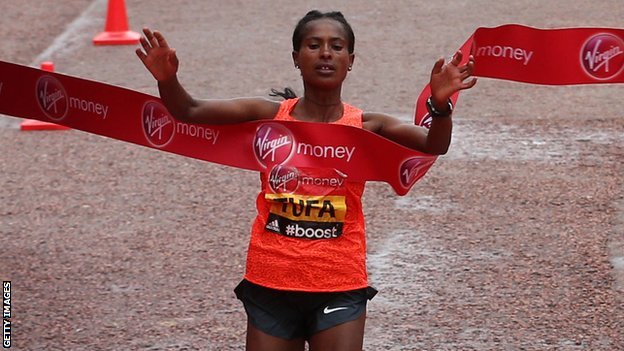 In the men’s wheelchair race, Britain’s six-time winner David Weir finished second as he lost out in a sprint finish to American Joshua George.

Kipchoge and Kipsang were level with 600m of their race left before the former moved ahead to win the race for the first time, clocking two hours four minutes 42 seconds.

Kipsang, the 2012 and 2014 winner, came home ahead of world record holder Dennis Kimetto, who completed a Kenyan one-two-three.

The Ethiopian was among a group of nine athletes with three miles to go before she and compatriot Tirfi Tsegaye broke away from the rest.

Tsegaye was third with Sonia Samuels, the first British athlete to finish, 16th in a time of 2:31:45.