Migrants From Myanmar, Shunned by Malaysia, Are Spotted Adrift in Andaman Sea

Southeast Asian governments are scrambling to deal with a worsening humanitarian crisis as fears grow over the fate of thousands of Bangladeshi and Rohingya migrants adrift in boats after being abandoned by smugglers.

“The secretary-general urges governments to ensure that the obligation of rescue at sea is upheld,” according to a statement from his office on Thursday.

“He also urges governments to facilitate timely disembarkation and keep their borders and ports open in order to help the vulnerable people who are in need,” the statement said.

But boatloads of migrants, many of them sick and hungry, remained in limbo in waters around the Strait of Malacca and Andaman Sea after Malaysia on Thursday joined Indonesia in saying it would turn back any boats attempting to unlawfully enter its territory. Thailand’s Prime Minister Prayuth Chan-ocha said his country would let people land, but only if they agreed to be processed as illegal immigrants and then returned to their countries of origin.

Human-rights organizations have warned of a looming humanitarian crisis if the boats, believed to be short of food, water and fuel, aren’t allowed to land.

After letting in a first wave of boats carrying up to 1,100 refugees earlier this week, Malaysia has hardened their stance. The country’s navy pushed back two boats with more than 800 migrants on board near Penang and Langkawi islands off the coast of northern Malaysia on Wednesday.

“What do you expect us to do?” said Malaysian Deputy Home Minister Wan Junaidi WanJaafar. “We have to send the right message that they are not welcome here.”

One of the boats pushed back by Malaysia was floating in Thai waters Thursday night, according to the International Organization for Migration. In a departure from its long-standing policy of turning away boat people, Thai authorities said they had offered to rescue those on board, only to be told the passengers didn’t want to disembark in Thailand and intended to make their way to a third country.

The IOM’s head of Thailand operations Jeffrey Labovitz said suspected traffickers are still on the converted fishing vessel. “The government was prepared to allow the boat to land on humanitarian grounds but tragically the migrants were persuaded to stay offshore,” he said. “Ten migrants have reportedly already died on this boat.”

More than 1,600 migrants and refugees from Myanmar and Bangladesh have landed on Malaysian and Indonesian shores in the past week, but organizations that track migration in Asia believe thousands more are stranded at sea. 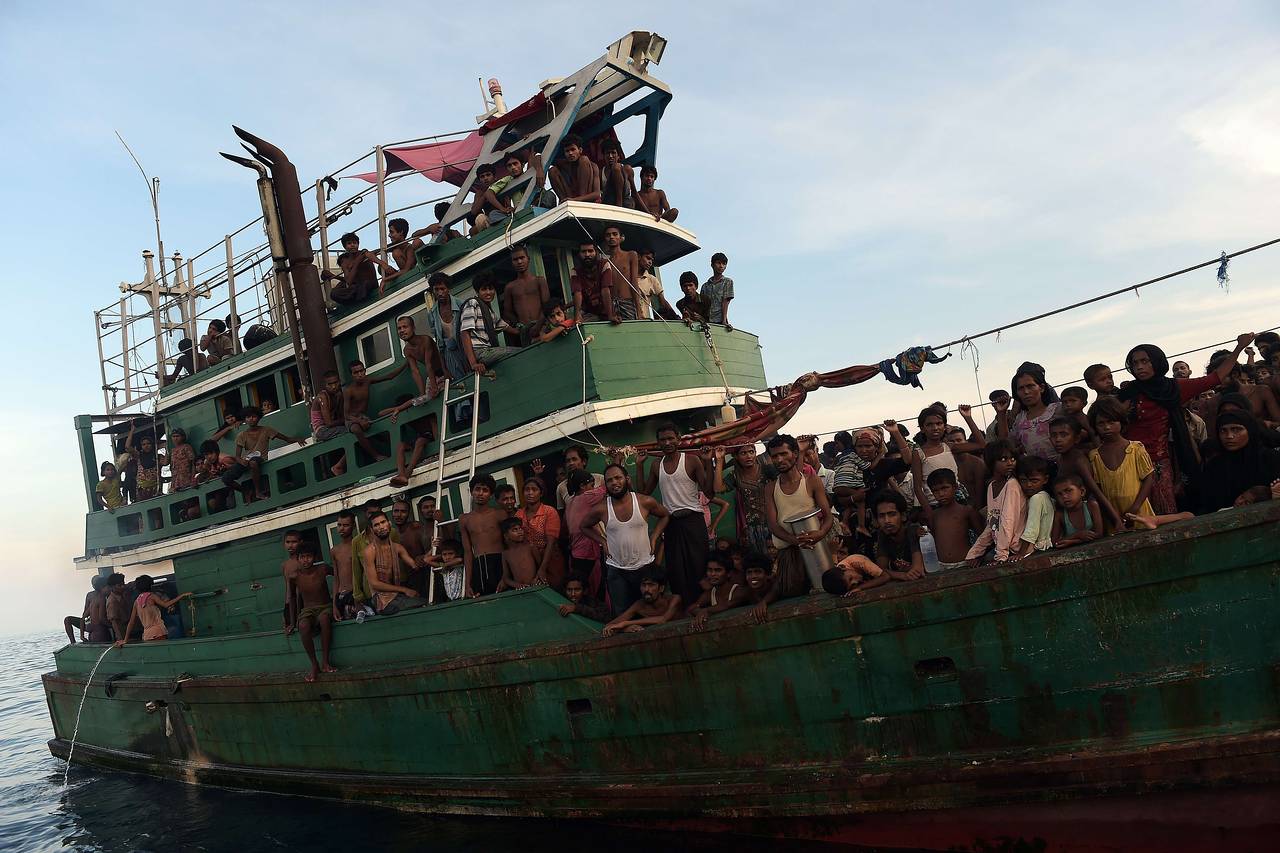 Rohingya migrants on a boat drifting in Thai waters off the southern island of Koh Lipe in the Andaman Sea on May 14. PHOTO: AGENCE FRANCE-PRESSE/GETTY IMAGES

The crisis deepened after Thailand launched an operation earlier this month to smashsecret jungle camps used by smugglers as transit points for Bangladeshis and Rohingya Muslim migrants trying to reach Muslim-majority Malaysia. Unable to make landfall, smugglers jumped ship, leaving migrants floating on fishing trawlers with little or no food.

The difficulties associated with cracking down on individual smugglers and their boats were illustrated by the first trawlers to reach Malaysia. One of the boats was still moored under the control of the police at a wharf on the resort island of Langkawi on Thursday.

When the red-and-blue painted boat slid into a picturesque inlet with swaying coconut trees and a luxury hotel in the background Sunday evening, there was little to distinguish the 15-meter-long wooden trawler from other fishing boats in the area. Only abandoned lungis—a wraparound cloth worn by Bangladeshis and some Burmese—and rotting bowls of rice gave away its status as a virtual prison ship.

“Everyone thought it was a fishing boat, until we saw people jumping into the water as it neared the beach,” said Muhammad Nasir, a local fisherman. 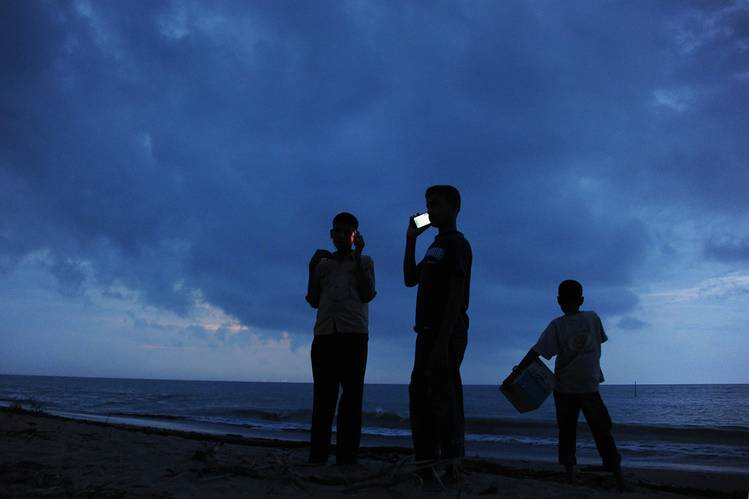 Migrants from Bangladesh use mobile phones to call their family back home from the shore of Kuala Cangkoi relocation area in Indonesia’s Aceh province on May 14. PHOTO: AGENCE FRANCE-PRESSE/GETTY IMAGES

Mr. Nasir said he couldn’t tell how many people were on the boat, which seemed as if it was steered by an amateur. “I saw heads bobbing in the water. Then one of my neighbors called the police,” he said.

Since last month’s discovery of several mass graves in Thailand, believed to contain the remains of migrants, the efforts of governments from Kuala Lumpur to Jakarta have focused increasingly on tackling smuggling networks, reinforcing border control and pushing back boatloads of migrants approaching their shores.

Many human-rights activists argue governments should be trying to help them instead.

The International Organization for Migration announced the release of $1 million to launch search-and-rescue operations to find migrants’ boats on Thursday, and has called on governments to join forces to help people at sea.

“Instead of mobilizing their navies to mount urgently needed rescue missions, front-line states are shamefully prepared to turn away and let these boats drift away to their doom,” said Phil Robertson, deputy Asia director at New York-based Human Rights Watch.

The Bangladeshi Coast Guard on Tuesday rescued 116 would-be migrants from a fishing trawler in the Bay of Bengal between Bangladesh and Myanmar. Most were Bangladeshi, with 22 Rohingyas among them, according to Coast Guard officers.

Muhammad Jahid, an 18-year-old Bangladeshi who was among those rescued, said the boat had been drifting for more than a month before it was intercepted. The Thai crew had fled the vessel aboard another ship after promising to take them to Malaysia, he said. “I saw several people die of starvation and disease,” he said.

‘Instead of mobilizing their navies to mount urgently needed rescue missions, front-line states are shamefully prepared to turn away and let these boats drift away to their doom.’

Bangladeshi police have also cracked down on the vast smuggling network which operates in the coastal district of Cox’s Bazar, shooting dead at least five alleged smugglers in gunfights.

The Myanmar government said on Thursday it was bringing back 125 of its citizens who had come ashore in Indonesia.

Win Naing Tun, the head of the anti-trafficking department under the Myanmar Ministry of Home Affairs said they were “victims of human trafficking.” “We will provide them with medical treatment and checkups, and will try to help them get jobs. Starting from tomorrow, they will be returned back to their homes in Myanmar,” he said.

The United Nations High Commissioner For Refugees, or UNHCR, estimates that around 25,000 Bangladeshis and Rohingya Muslims from Myanmar boarded smugglers’ trawlers in the first quarter of this year, twice more than the same period last year. The UNHCR estimates that around 300 people died at sea.

According to the Arakan Project, a nonprofit that tracks migration in the Bay of Bengal, up to 6,000 of those people haven’t reached their destinations, raising fears they might still be at sea in rickety fishing boats.