A 24-year-old Kuwaiti-born gunman opened fire on a military recruiting station on Thursday, then raced to a second military site where he killed four United States Marines, prompting a federal domestic terrorism investigation. Three other people, including a Marine Corps recruiter and a police officer, were wounded, according to law enforcement officials. 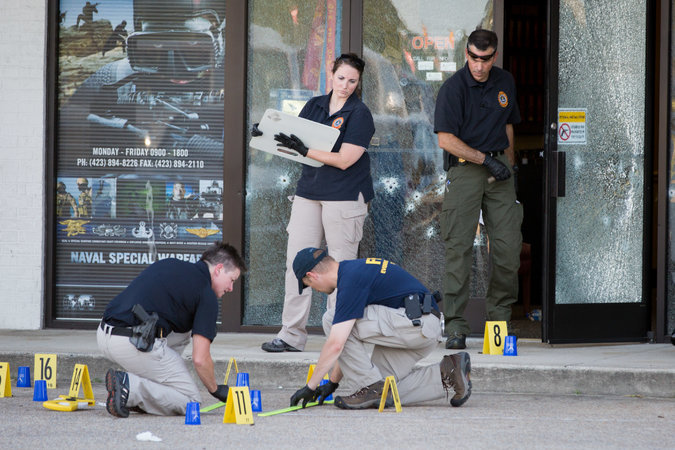 The Federal Bureau of Investigation identified the gunman, who also died Thursday, as Mohammod Youssuf Abdulazeez, who became a naturalized United States citizen and went to high school and college in Chattanooga. Although counterterrorism officials had not been investigating Mr. Abdulazeez before Thursday’s shooting, federal officials familiar with the inquiry said that his father had been investigated years ago for giving money to an organization with possible ties to terrorists.

At a late night news conference, F.B.I. officials said that thus far they did not have “anything that directly ties” the suspect to international terrorist organizations.

Attorney General Loretta E. Lynch said the F.B.I. was leading “a national security investigation,” and the United States attorney for the Eastern District of Tennessee, William C. Killian, said federal officials were “treating this as an act of domestic terrorism.” But he, like other federal officials, cautioned that the investigation would ultimately determine how the shooting would be classified. Law enforcement officers swarmed the sites throughout the day and said that they knew of no public safety concerns.

SITE Intelligence Group, which tracks terrorist activities, said that Mr. Abdulazeez had this week posted at least two Islam-focused writings on a blog, including one in which he described life as “short and bitter.” He also said that Muslims should not miss “the opportunity to submit to Allah.”

The separate rampages, at an armed services recruiting center and a naval reserve facility, were together the highest profile episode of violence at domestic military installations since April 2014, when three people were killed and more than a dozen were wounded at Fort Hood, Tex. And the killings here came in yet another mass shooting, less than one month after nine people were killed inside a church in Charleston, S.C.

President Obama, in what has become a grimly familiar ritual, offered his condolences to the victims and promised a painstaking investigation. Pentagon officials said the identities of the dead would be released after next of kin were notified.

“My main message right now is, obviously, the deepest sympathies of the American people to the four Marines that have been killed,” Mr. Obama told reporters in the Oval Office after he met with the F.B.I. director, James B. Comey. “It is a heartbreaking circumstance for these individuals, who have served our country with great valor, to be killed in this fashion.”

Mr. Obama added, “I’d ask all Americans to pray for the families who are grief-stricken at this point.” 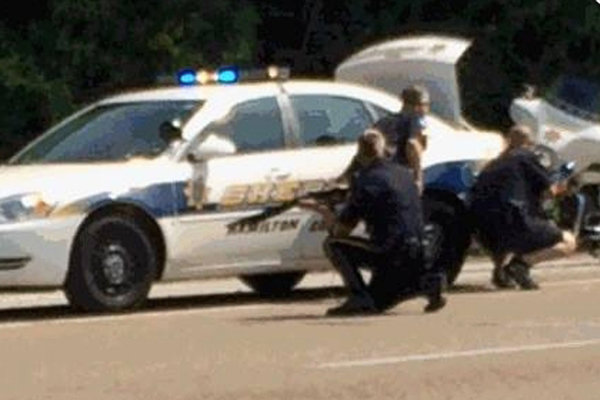 Police officers near the naval reserve center where four Marines were killed. Three other people were wounded, according to law enforcement officials. CreditWRCB-TV, via Associated Press

Mr. Abdulazeez was not on the government’s radar, but law enforcement officials said that his father had been under investigation years ago for possible ties to a foreign terrorist organization. At one point, a law enforcement official said that the father was on a terrorist watch list and was questioned while on a trip abroad, but that he was eventually removed from the list.

Mr. Obama said it appeared that the gunman had acted alone. According to interviews with three counterterrorism officials, the attack fits the pattern of assaults that the Islamic State terror group has called for, but investigators found no immediate ties to it or other terrorist groups.

Investigators hoped that an analysis of the gunman’s computer, phone and accounts would reveal whether he was inspired or directed. Officials said that they expected the Islamic State to claim responsibility for the attack but said that a claim alone would not mean anything.

Investigators said the shootings unfolded over about 30 minutes at midmorning, first at a military recruiting center on Lee Highway and later at a naval reserve facility on Amnicola Highway less than 10 miles away. According to officials, the gunman used multiple weapons and shot from his car at the recruiting center. All the fatalities occurred at the second scene, where Marines and sailors are trained for reserve duty. A witness told law enforcement officials that the gunman reloaded more than once there.

The authorities said that how Mr. Abdulazeez had died had not been determined. An autopsy will be performed this weekend. 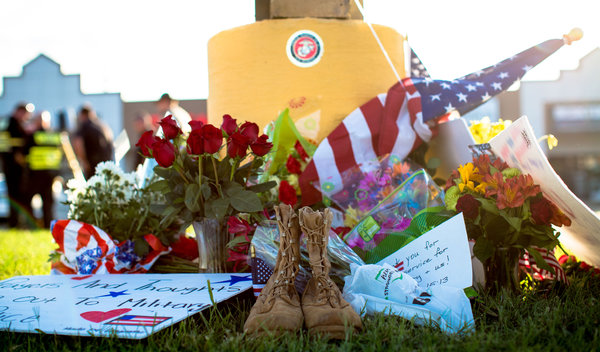 A memorial at the military recruiting center where the shootings began on Thursday in Chattanooga, Tenn. CreditKevin Liles for The New York Times

Carolyn Taylor, an employee at Binswanger Glass, which has offices across the street from the Navy building on Amnicola Highway, said she had heard scores of gunshots in the hours before officials announced about 1:15 p.m. that the shooting was over.

“At least 100, at least, because it was several at one time,” said Ms. Taylor, who added that police officers had swarmed into the area, their weapons drawn, “and then, within seconds, we heard the gunfire.”

David Vaughn, whose commercial printing company is also nearby, said he had heard “two loud booms” around 10:45 a.m. He soon heard multiple gunshots — he estimated 10 or 12 — in rapid succession, and more police officers poured into the area.

“Then, it was just silence,” he said, except for the sirens of the emergency vehicles that rushed to the reserve building, which is nestled behind a wooded area and is partly visible from the street.

Officials said they believed that before the rampage at the reserve building, formally known as the Navy Operational Support Center, the gunfire began at an armed forces recruiting center tucked into a khaki-colored strip mall where the green hills of East Tennessee are visible in the distance. On Thursday afternoon, more than 20 cups marking bullet casings littered the parking lot.

The president offered condolences to the families of the victims, and said the government’s response would be “thorough and prompt.”

By AP on Publish DateJuly 16, 2015. Photo by Pool photo by Olivier Douliery. Watch in Times Video »

Yellow police tape restricted access to the lot, but numerous bullet holes were visible in the plate glass of the recruiting center, which is wedged between a mobile phone retailer and an Italian restaurant. The bullet holes formed a rough horizontal line, suggesting that the gunman sprayed the weapon from one side to the other.

Michael Usher, 37, a Chattanooga resident, was waiting near the tape for word from his wife, Jackie Barber, who works at the phone store. He said that she had told him the business was having a good day when the employees heard two pops. “Pow pow,” he recalled.

The workers dived to the ground and crawled to the back of the store. A few minutes later, Mr. Usher said, they emerged and saw a man in a Ford Mustang quickly leave the parking lot.

An Army spokeswoman, Kelli Bland, said four Army recruiters had been in the building at the time of the shooting, but no one was injured.

“They did confirm there was a shooting, and that they followed the active shooter drills that they have done in the past,” Ms. Bland said.

Federal and local officials immediately described the attack as deliberate and targeted.

“Somebody brutally and brazenly attacked members of our armed services,” the Chattanooga police chief, Fred Fletcher, said at a news conference, where Mayor Andy Berke described Thursday as “a nightmare for the city.”

In a statement, the Islamic Society of Greater Chattanooga said, “We condemn this act in the strongest possible terms as one of cowardice and hate.”

The shooting provoked a wide-ranging federal investigation, and Edward W. Reinhold, the special agent in charge of the F.B.I.’s Knoxville division, said he expected hundreds of bureau employees would participate in the inquiry.

The authorities on Thursday blocked Colonial Way Circle, the street in the suburban Chattanooga neighborhood where investigators believe Mr. Abdulazeez had lived with members of his family. Neighbors said he had drawn relatively little notice.

“We’re all just in total shock that this happened,” Mary Winter, the president of the neighborhood association, said. “This has been a huge shock in our neighborhood and our community. Our hearts go out to the Marines who were killed, but our hearts also go out to the family.”

Several hours after the shooting, F.B.I. agents, who had obtained a warrant from a judge, began a search of the gunman’s residence. The agents were looking for electronic devices, like computers, that analysts could examine to determine whether Mr. Abdulazeez had connections to ISIS or another terror group.

The shooting spurred fears of subsequent attacks, and Jeh Johnson, the homeland security secretary, said officials were “enhancing the security posture at certain federal facilities, out of an abundance of caution.”

The day of gunfire unnerved Chattanooga, one of Tennessee’s largest cities and a place known more for its scenery and tourism than talk of terrorism and violence. After the shootings, local universities ordered lockdowns, and officials investigated reports of gunfire at Bradley Square Mall, located in the Chattanooga suburb of Cleveland.

But much of the speculation turned out to be unfounded.

“There have been no shots fired at Bradley Square Mall,” the mall’s management said on its Facebook page, which added that a lockdown it had imposed was “a safety precaution.”

In Chattanooga, however, the horror was vivid and wrenching. In a statement, the Navy secretary, Ray Mabus, called the shootings “both devastating and senseless.”

He added, “While we expect our sailors and Marines to go into harm’s way, and they do so without hesitation, an attack at home, in our community, is insidious and unfathomable.”