Kurdish forces in Syria have accused Turkey of repeatedly attacking their units across the border.

Turkey said it was investigating the claims but insisted the Syrian Kurdish units remained “outside the scope of the current military effort”.

Turkey has also said it has no plans to send ground troops into Syria.

The Kurdish People’s Protection Units (YPG), the armed wing of the main Syrian Kurdish party (PYD), said that Turkish tanks had shelled the Kurdish-held village of Zormikhar inside Syria late on Sunday evening.

It added that, an hour later, one of its vehicles had come “under heavy fire from the Turkish military east of Kobane in the village of Til Findire”. 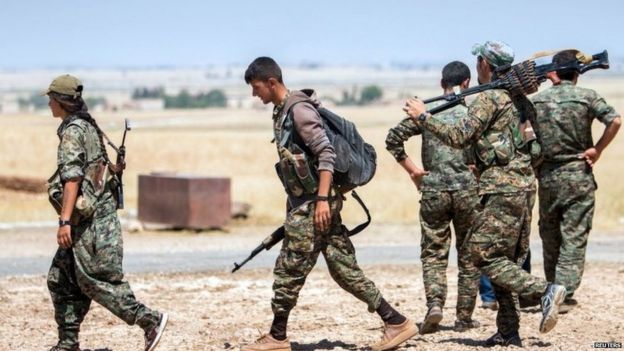 Syrian Kurds are “outside the scope of the current military effort”, Turkey insists

In a statement on Monday, the YPG said: “Instead of targeting IS terrorists’ occupied positions, Turkish forces attack our defenders’ positions. This is not the right attitude.

“We urge Turkish leadership to halt this aggression and to follow international guidelines. We are telling the Turkish Army to stop shooting at our fighters and their positions.”

A Turkish government official said its military operations sought “to neutralise imminent threats to Turkey’s regional security” and was targeting IS in Syria and the Kurdish separatist PKK in Iraq.

“We are investigating claims that the Turkish military engaged positions held by forces other than [IS],” the official said.

“The PYD, along with others, remains outside the scope of the current military effort.”

“The presence of a Turkey that can use its force effectively can lead to consequences which can change the game in Syria, Iraq and the entire region; everyone should see that,” the Hurriyet Daily News quoted him as saying.

The Washington Post meanwhile reports that Turkey and the United States have agreed to create a de facto safe zone along Syria’s border with Turkey.

Such a deal would significantly increase the scope and pace of the US-led air war against IS in northern Syria, the paper says. 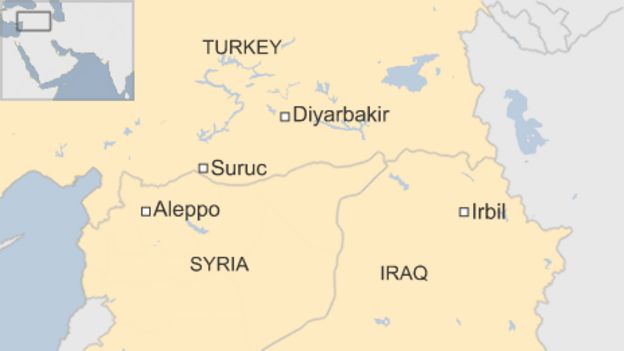 Nato is to hold an emergency meeting on Tuesday to discuss the situation.

Turkey – a Nato member – asked for the meeting based on Article 4 of the organisation’s founding treaty, which allows members to request such a summit if their territorial integrity or security is threatened.

“When Turkey requests for such a meeting I think it’s very right and very timely to have a meeting where we address the turmoil and the instability we see in Syria, Iraq and surrounding and close to Nato borders of Turkey,” Nato Secretary General Jens Stoltenberg told the BBC.

Mr Davutoglu said Turkey was prepared to work with the PYD – which has links to the PKK (Kurdistan Workers’ Party) – provided it did not pose a threat to Turkey and severed relations with Syrian President Bashar al-Assad.

However, the raids against the PKK in northern Iraq effectively ended a two-year ceasefire.