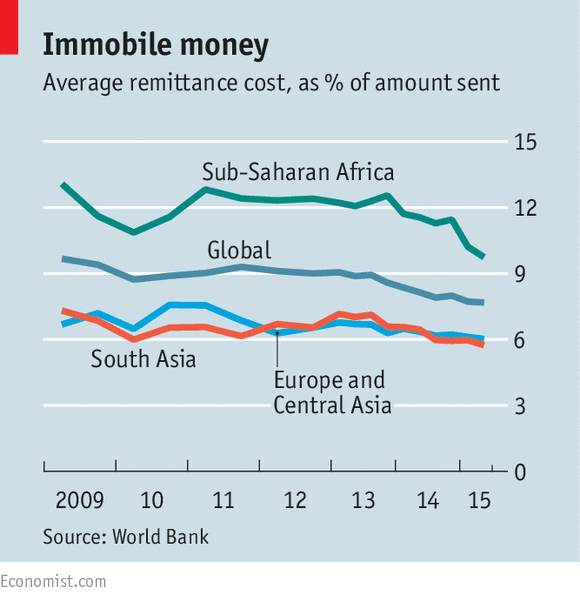 AFTER sweating through a day’s work under the hot Dubai sun, the last thing an Indian construction worker wants is to donate a slug of his earnings to a bank or money-transfer outfit. Yet that is what he must do. On average, 6.9 cents of every dollar remitted to India from another country is eaten up by fees and foreign-exchange margins, according to the World Bank. Indians get off relatively lightly. A sub-Saharan African migrant loses an average of 9.7 cents.

In 2009 the G8 pledged to cut the average cost of international remittances to 5% of the sum sent within five years. Rates have since come down, but not by much: the average is now 7.7%. And the implicit tax on remittances is even higher than these figures suggest, since they are based on transfers of $200, but many payments are smaller.

In part, Dilip Ratha of the World Bank blames the exclusive agreements signed by banks and other companies involved in handling remittances. By reducing competition, these keep prices high. Some countries, including India, have banned such tie-ups, but they remain common in Africa. In 2014 the Overseas Development Institute, a think-tank, estimated that if the average cost of sending money to Africa could be cut to 5%, it would mean $1.8 billion more for the continent every year.

Still, Mr Ratha is optimistic. Challengers to the banks and big money-transfer firms are popping up, particularly in London. Flush with venture capital, they claim they can use technology to cut costs. TransferWise began as a peer-to-peer foreign-exchange service for the rich world; Taavet Hinrikus, one of its founders, says India is now the firm’s fastest-growing destination. It plans to offer transfers to Mexico soon.

Sending money abroad is comparatively simple. The difficulty lies in getting the cash to spouses and parents in poor countries, who probably do not have bank accounts and may live a long way from a bank branch. Big money-transfer outfits like MoneyGram and Western Union have hundreds of thousands of agents and thus a colossal advantage in the cash market. But Ismail Ahmed, of WorldRemit, an online transfer service, reckons the rapid growth of mobile money in places like Kenya, Somaliland and Zimbabwe is eroding this advantage. Most of the money sent to Africa through WorldRemit goes to mobile accounts.

Technology can do less to tackle another problem. Anti-money-laundering and counter-terrorism regulations are making banks reluctant to clear transfers to conflict- or crime-racked spots such as Somalia, which depends on remittances. “Derisking”, as this trend is known, is spreading to bigger countries. Odilon Almeida of Western Union says this is bound to reduce competition and thus drive up prices. It is also, probably, pushing remittances into obscure and illegal channels, which is no good for anybody.