SomTribune
Home Culture/Religion Entertainment Somaliland: The movies where police join in as extras

A group of film-makers and stuntmen is hoping to turn the breakaway territory of Somaliland into the next Hollywood. Undeterred by a shortage of cash, they turn to the local police for help when they need props and extras.

It’s the middle of nowhere and cars are pursuing each other in tighter and tighter circles, sending thick clouds of dust into the hot air. It is a truly spectacular chase.

Mohamed Saleh is at the wheel of the wildest car. With a cool demeanour and an Afro hairstyle, he is the main stuntman. Like everyone else on the film set, he is completely untrained.

“One time the car nearly flipped over,” he tells me. “It was vertical, balancing on two tyres. But far more frightening was the fact that the cars did not belong to us! The company we hired them from had no idea we were using them in an action movie. They thought we were just going for a leisurely drive.” 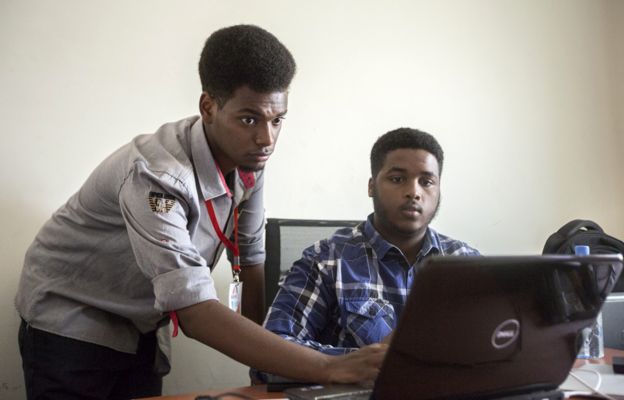 In the Amazing Technology Group’s tiny one-roomed office in the capital Hargeisa, a giant Hollywood-style movie poster takes up a whole wall. The group’s chairman (and director, producer and cameraman), Ibrahim Mohamed, sits behind the desk.

He reaches under the table and presents me with a large, messy bundle of green cloth. This is the green screen, used as a neutral backdrop when filming, which can be filled in with a different background later on. He points to a battered camera perched in the corner. “It is the only one we have,” he says, “but it is an improvement from before, when they had to rent or borrow one.”

“We have to make do with whatever we have,” says vice chairman and main actor, Hersi Abdirizak. “We don’t have the money for costumes, so we borrow clothes from our friends. For pistols, we buy plastic guns in toy shops and paint them black. Our friends in the police lend us the knives, axes and machetes.”

On set for their latest film, the gun they use is a real AK47. It too comes from a friend in the police. “I hope it’s not loaded,” says Adam Konvict, a local rap artist who, together with an off-duty policeman, is helping out as an extra. 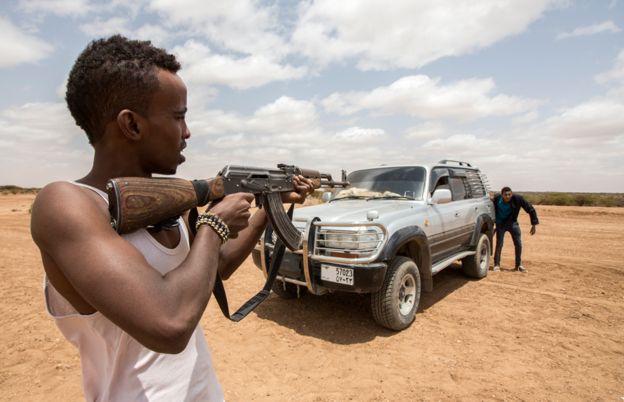 The company relies a lot on the generosity of others. In its new action movie – a Somali take on cops and robbers – some of the actors are on loan from the Somaliland circus troupe, performing incredible acrobatics as they race through the city streets.

What the ATG lacks in resources is more than made up for in imagination and get-up-and-go attitude. This group of seven young men aimed high, right from the start. While still in their teens at university, they made their first movie. It wasn’t a short, student-style video but a full-length action film. With romance, violence, an evil gangster and thrilling car chases, The Lost Diamond proved a huge hit when it was shown on local television. 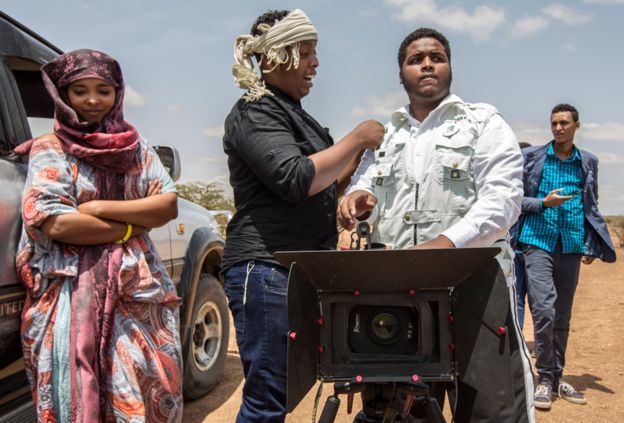 “We learned everything we know by watching Hollywood and Bollywood films,” says Hersi. “I love playing the villain. I get to do all the fun stuff. My role model is the Joker in The Dark Knight.” So convincing is Hersi as a gangster that he says people are frightened of him when they see him in the street.

“We want to dig out the treasure that is here. Through our movies, we want to show the whole world our Somali treasure,” he says. “Our goal is to launch a booming Somali film industry. We could call it Sollywood”. 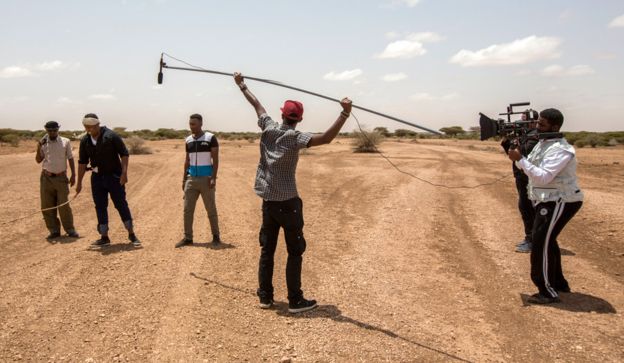 Some of the ATG’s films contain serious messages. Its latest release is about relations between the diaspora, who pour into Somaliland in the summer, and those who stayed behind during the territory’s long and difficult years of conflict. The film, which has gone viral in Hargeisa, is a hot topic of conversation in the city’s coffee shops and restaurants.

It was over a wickedly sweet milkshake and vanilla cake, thick with colourful icing, that I first heard about the ATG. Somali friends collapsed with laughter while telling me about the film, where slim locals mock a bulky diaspora man, instantly identifiable by his rolling swagger and flashy clothes. But they also discuss the serious points raised about growing tensions between the two groups. 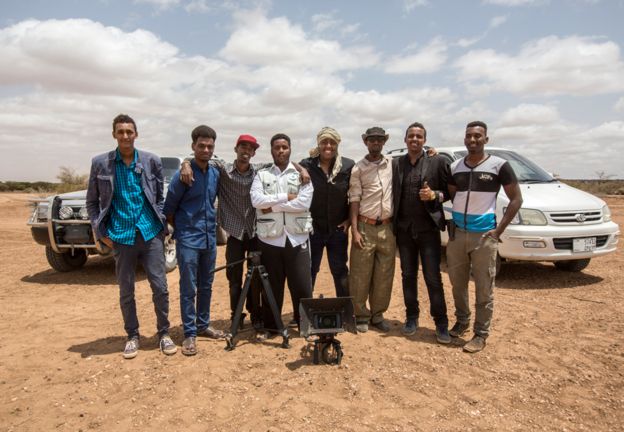 The team rely on one camera – a digital SLR, which they have adapted

The dynamic and daring spirit of these young men is typical of Somalilanders. One man is blasting a road through the mountains to the sea. A woman has converted her house into a luxury restaurant, where diners sit under the stars on the rooftop. A businessman talks of bringing in a funfair. There is an annual book festival.

There is not much for people to do here, especially the young. This is an area where Al Qaeda-linked militants are active in Somalia to the south and a short boat ride away in Yemen.

But that stunt man with the cool hairdo is quite the heart-throb of Hargeisa. I discovered this after the ATG posted photos of our meeting on Facebook. Lots of young Somali girls came to me in great excitement when they realised I might be able to introduce them to their idols. Most of them asked for “the one with the Afro”. And when he agreed to pose for selfies, they positively swooned.