Facebook
Twitter
Pinterest
WhatsApp
The Aegean Airlines flight left Athens for Brussels at 8.30am last Wednesday, carrying six Syrian and Iraqi families to new lives in Luxembourg. On arrival, the 30 refugees were taken on a two-hour bus trip to the grand duchy to have their paperwork processed.

It was undoubtedly a big moment, not only for the men, women and children who made the short but treacherous crossing from Turkey to the Greek islands. Of the more than 600,000 people who have crossed into the EU by reaching Greece this year, these were the first to be registered, fingerprinted and then resettled elsewhere in Europe under the EU’s ambitious, if flagging, plan to use compulsory quotas to share 160,000 refugees.

It took the Luxembourg authorities two months to settle their newcomers. None of those lingering in Greece wanted to move to the EU’s wealthiest country in per capita terms, second globally only to Qatar. Luxembourg currently chairs the EU’s rotating presidency. Jean-Claude Juncker, its prime minister from 1995 to 2013, is head of the European commission and one the architects of the new quota system. So Luxembourg officials were keen to be seen to be doing their bit.

“Some of those selected to go to Luxembourg refused, because they all wanted to go to Germany,” Dimitris Avramopoulos, the European commissioner for immigration, said. 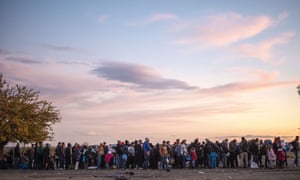 People queue at a registration centre after crossing the border between Greece and Macedonia. Photograph: AFP/Getty Images

If refugees are refusing to go to Luxembourg, it will be a much taller order persuading them to go to Slovakia or Estonia.

The faltering start in Greece to sharing refugees in Europe highlights the EU’s multiple dilemmas, as leaders meet in Malta on Wednesday and Thursday for their fifth summit since June on the emergency.

The confusion, disputes and mudslinging of the past few months have opened up a fundamental question. Do they want a Europe of open or closed borders? The dilemma is embodied in the diametrically opposed policies of the German chancellor, Angela Merkel, and Hungary’s prime minister, Viktor Orbán.

Merkel has won international plaudits for her liberal, open-door policies. She is also under siege, however, at home from malcontents in her coalition government, in the EU because her partners are not sure what she wants, and by third countries who say they are willing to help but are also baffled by the absence of coherent policy in Berlin.

Orbán, gleefully denouncing liberals as clueless, sealing Hungary’s borders with razorwire and effectively abolishing the claiming of asylum, is walking tall at home because of his hardline policies. He is also increasingly winning the quiet support of other EU leaders.

“I don’t say he should be entirely supported,” said a senior diplomat involved in the Malta summit. “But he has a point. There is some truth in what he says. Drastic, restrictive positions would have helped earlier.”

The two-day Valletta summit is a lavish event, bringing together more than 60 European and African leaders, with the EU carrying a mixed bag of sticks and carrots, including a €1.8bn “trust fund” in an attempt to cajole African governments into taking migrants back and stopping them from coming to Europe in the first place. Many of them are disenchanted with an EU containment strategy that they feel resembles a form of blackmail.

“They say it’s all about Europe externalising and outsourcing its own problems,” said the diplomat, who has been liaising with the African governments.

“The Europeans are not exactly visionaries,” another international official taking part in Malta said. “And they don’t realise that they are no longer the centre of the world.”

The African meetings are to be followed on Thursday by another emergency EU summit called by Donald Tusk, the president of the European council, who increasingly takes a pro-Orbán line on the crisis.

His entourage is predicting that Tusk will push for “drastic and radical action” by the EU, which translates as partial border closures in Europe’s Schengen area, both externally and internally.

Given its size and geography, and the number of people involved, Germany is Europe’s shock absorber in the refugee crisis. It is expected to take in a million newcomers this year.

At a meeting with Balkan leaders two weeks ago, Merkel was repeatedly asked to clarify her policy. “Many of them did not like that they were summoned by Germany to be told what to do. But the problem is that the Germans don’t know what to do,” said the senior diplomat.

The signals from Berlin have been very mixed over the past week. Merkel’s interior and finance ministers, both in the same party, regularly contradict her. On Friday the interior ministry announced an abrupt U-turn, saying Syrians would no longer qualify for full asylum in Germany. That was then retracted amid coalition cacophony. On Tuesday, the same ministry said Berlin was ending the open-door policy on Syrians and would now return them to the country where they entered the EU, albeit not Greece.

This amounts to a tightening of the German border, with alarming knock-on effects for EU countries such as Croatia and Slovenia, which will only let tens of thousands of migrants in if they are in transit. The same applies to non-EU countries on the Balkan route, such as Serbia and Macedonia.

Slovenia on Wednesday started laying out wire fence along the Slovenian side of the Sutla river that divides the country from Croatia. Prime Minister Miro Cerar has said the border will remain open, but the fence will help control the flow of people.

“Merkel was asked if she would close the border, and told the other leaders very clearly ‘I will never do that’,” said another senior EU policymaker. “If you close the German border, you end European integration. You cannot do that.” 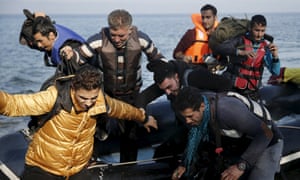 People jump off an inflatable raft as they arrive on the Greek island of Lesbos from Turkey. Photograph: Reuters

Merkel, however, is increasingly lonely and embattled. Policymakers say privately that she is looking for a way to back down without losing face. Her open policy is being tightened incrementally. She also wants to strike a deal with Turkey, paying Ankara to police the EU’s external border with Greece, essentially because there is no confidence in Athens’ ability to do it.

In the latest policy move, Berlin and Brussels are pressing the transit countries of the Balkans to set up new “processing centres” to screen asylum claimants. It is an admission that the policy of having them finger-printed and registered first in Greece before moving on has failed. Nor do Slovenia, Croatia or Serbia want to register them, however, for fear they will then be saddled with responsibility for the refugees.

Avramopoulos sounds bitter and disenchanted. “Schengen is the greatest and most tangible achievement of European integration,” he said. “But some policies are putting Schengen in danger. It’s a difficult moment for Europe. Unfortunately, the European dream has vanished.”

The confusion over policy is made worse by the increasingly risible mismatch between what EU leaders say and do. A few weeks ago they promised to send 400 police officers to Slovenia to help with the influx. Only 33 have arrived. Of the 160,000 refugees they agreed to share in September – this is now EU law – 116 have been resettled from Italy and Greece.

Months ago they also agreed to share 22,500 refugees taken directly from camps in Turkey and Lebanon. To date 132 Syrians have arrived in Liechtenstein, the Czech Republicand Italy. At every emergency meeting, ministers and leaders call for reinforcements for the EU’s border agency, Frontex. They then fail to supply the staffing, funding and equipment they promised.

“Most of these leaders are lost and they’re looking to someone like Tusk to come up with a big idea,” said the senior diplomat. “This is the challenge, because the whole thing can crumble and individual countries will start following Hungary. That won’t help Europe to remain credible.”