Somalia’s security forces ended a deadly siege of a beachfront restaurant, with more than 20 people killed in the attack, a police official said Friday.

The security forces took control of the restaurant just before dawn, said Capt. Mohamed Hussein, speaking from the scene of the attack in Mogadishu.

It was not clear whether Hussein’s report of more than 20 killed included the assailants. Islamic extremist group al-Shabab claimed responsibility for the attack, in a broadcast on its online radio late Thursday.

Volunteers carried bodies from the scene of the attack early Friday.

“I was intending to go out but suddenly we heard a heavy explosion followed by gunfire. … I saw a militant fighter shooting indiscriminately on everybody. Then I locked myself inside a room until we were evacuated peacefully by the security forces,” said Abdulkadir Mohamed Somow, who had been trapped inside the restaurant.

Blasts and bursts of gunfire could be heard as Somali special forces went from room to room pursuing the al-Shabab gunmen who were holed up inside the restaurant.

Hussein, the police official, said the security forces rescued many people who had been trapped inside the restaurant’s hall, where a party was taking place when the attack started on Thursday.

Witnesses said that gunmen entered the restaurant from the direction of the beach. They shouted “Allahu akbar,” the Arabic phrase for “God is greatest,” as they attacked. 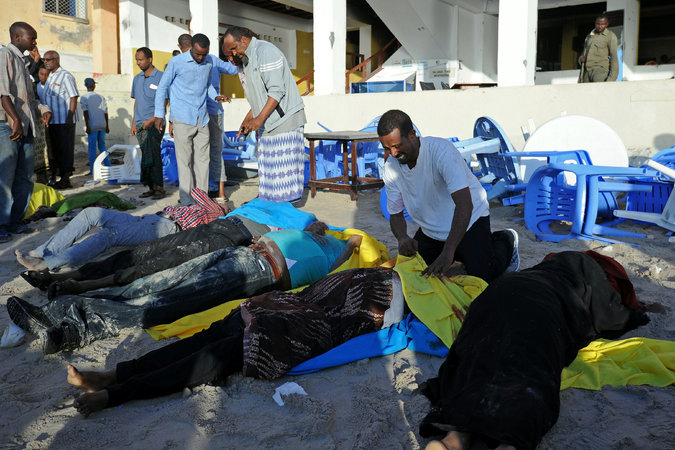 “They randomly fired at people sitting near the beach before entering the restaurant,” said witness Ahmed Nur, who was strolling along the shoreline when the attack happened.

Al-Shabab attacked Kenyan peacekeepers in southwestern Somalia last week. The al-Qaeda-linked group said it had killed about 100 Kenyans and seized weapons and military vehicles. The Kenyan government has given no death toll, but said there were some fatalities.

Despite being pushed out of Somalia’s major cities and towns, al-Shabab continues to launch deadly guerrilla attacks across the Horn of Africa country. African Union troops, government officials and foreigners are frequently targeted. 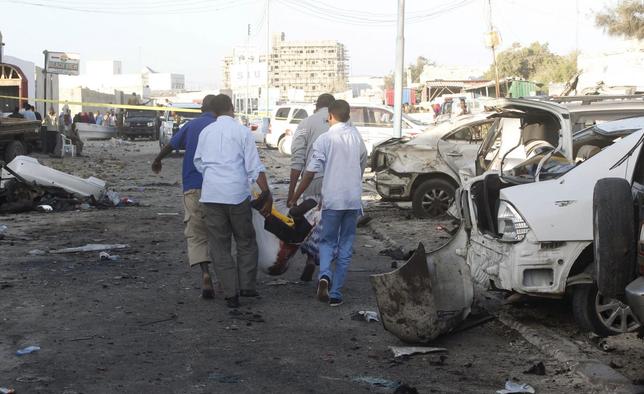