Recently in the northwestern Ethiopian city of Bahir Dar, I had the pleasure of encountering an Israeli tourist who was displeased by the superior fees charged to foreign visitors for entrance to the country’s museums, churches, and other sites. Ethiopian citizens pay much less. Never mind that the per capita annual income in Ethiopia – $550 according to the World Bank’s last calculation – is less than the price of the average round-trip ticket from Tel Aviv to Addis Ababa.

According to the Israeli, the disparity in entrance fees was tantamount to “racism” – a curious choice of vocabulary, no doubt, for a white person hailing from a state that has racism rather down to an art, and even more curious in the context of Ethiopia in particular.

The Ethiopian community in Israel at present numbers about 135,000 people. The arrival of Ethiopian Jews to the Jewish state began in the 1970s, when, as a BBC article notes, “the Israeli secret service Mossad organised their immigration through refugee camps in Sudan,” where they were fleeing war, famine, and persecution. In the 1980s and ’90s, the Israeli military staged two major covert airlift operations, dubbed “Operation Moses” and “Operation Solomon” respectively. After that, migration continued in slightly less dramatic form.

While the influx of Ethiopian Jews may have assisted numerically in establishing Israel as the official homeland for Jews worldwide, thereby counteracting rightful Palestinian claims to the area, the resulting skin-colour scheme has proved unwelcome to many sectors of the Israeli population.

For Ethiopians in Israel, racism and discrimination have been the name of the game. Obstacles to a reasonably gratifying existence have included curtailed educational and employment opportunities, with many children forced into what has in recent years often amounted to a segregated school system. A March 2016 article in Israel’s Haaretz newspaper reported that, “among [Israeli] children finishing 12th grade in 2013 and taking exams, only 26 percent of students of Ethiopian origin achieved matriculation results enabling acceptance to university, compared with 52 percent of the general population”.

Fifty-two, it turns out, is a bit of a recurring number. In 2013, the same paper reported that “nearly 52 percent of Ethiopian-immigrant families [in Israel] are below the poverty line”. As would be expected, unemployment rates for Ethiopian Jews are higher and wages are lower.

Meanwhile, practices aimed at the societal exclusion of dark-skinned Jews have reportedly ranged from decisions by certain landlords not to rent properties to Ethiopian-Israeli families to a recurring denial of marriage licenses to Ethiopian-Israelis in the central Israeli city of Petah Tikva.

When Magen David Adom, Israel’s emergency medical service and blood bank, refused in 2013 to accept a blood donation from Ethiopian-born Israeli parliamentarian Pnina Tamano-Shata, the Israeli Ynetnews website noted that “[t]he staff then told her that she could donate blood, but her donation would be frozen, not used”.

Tamano-Shata, it bears mentioning, is a veteran of the Israeli military. Apparently, Ethiopians can bleed for Israel in combat but not for humanitarian purposes. 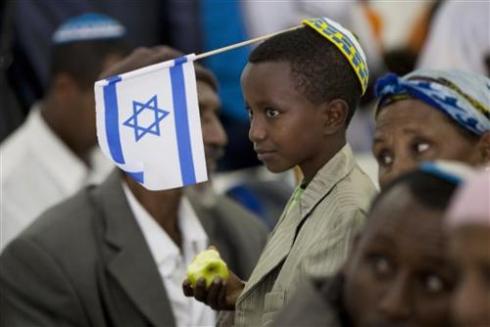 There are, however, other ways to extract blood. Of the many instances of Israeli police brutality against the Ethiopian community, last year’s beating by policemen of an Ethiopian Israeli soldier triggered street protests, to which police responded with stun grenades, water cannon and other harmful material.

Recently in Jerusalem, Ethiopians were once again seen protesting, this time against the Israeli government’s decision to cancel its plan to allow more than 9,000 Ethiopian Falash Mura to immigrate to Israel. The descendants of Jewish Ethiopians who converted to Christianity, the members of this particular group of Falash Mura were meant to reunite with family members already in Israel.

Indeed, the initial authorisation of the sizable migration may have come as a surprise to those acquainted with the Israeli medical tradition of forcibly administering contraceptive drugs to Ethiopian women, one by-product of which has been, obviously, to limit the size of the population in question.

Of course, the state of Israel has long been known for its adeptness at population control; just Google its attacks on the Gaza Strip. Which brings us to a subject that just might render the situation of Ethiopian Jews in Israel somewhat less than black and white: the Palestinians.

For even were the Ethiopians to miraculously attain equal rights in Israel, it wouldn’t change the fact that the state itself is predicated on the permanent denial of rights of the original inhabitants of the land, who have instead been treated to policies of ethnic cleansing. Incidentally, this very same incriminating term has also been invoked by Israeli-Canadian journalist David Sheen to describe Israel’s current policy vis-a-vis non-Jewish African refugees.

According to the British Independent, Israeli Prime Minister Benjamin Netanyahu in 2012 “warned that illegal immigrants from Africa ‘threaten our existence as a Jewish and democratic state’”. But you can’t threaten something that doesn’t exist in the first place.