The World Health Organization (WHO) said on Wednesday the number of adults with diabetes has almost quadrupled worldwide since 1980 to 422 million, mainly in developing countries, driven by a rise in overweight and obese people, a UN spokesman said. 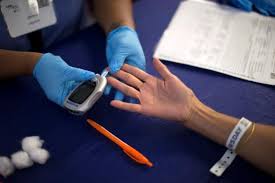 On the eve of World Health Day, which falls on Thursday, the WHO published its first “Global report on diabetes,” which highlighted the need to step up prevention and treatment of the disease.

Margaret Chan, WHO director-general, stressed that “if we are to make any headway in halting the rise in diabetes, we need to rethink our daily lives: to eat healthily, be physically active, and avoid excessive weight gain.”

She added that even in the poorest settings, governments must ensure that people are able to make these healthy choices and that health systems are able to diagnose and treat people with diabetes.

WHO notes that diabetes is a chronic, progressive noncommunicable disease characterized by elevated levels of blood glucose.

It occurs either when the pancreas does not produce enough of the insulin hormone, which regulates blood sugar, or when the body cannot effectively use the insulin it produces.

Among the key findings from the report are:

— The number of people living with diabetes and its prevalence are growing in all regions of the world. In 2014, 422 million adults (or 8.5 percent of the population) had diabetes, compared with 108 million (4.7 percent) in 1980.

— The epidemic of diabetes has major health and socioeconomic impacts, especially in developing countries.

— Diabetes caused 1.5 million deaths in 2012. Higher-than-optimal blood glucose caused an additional 2.2 million deaths by increasing the risks of cardiovascular and other diseases.

“Many cases of diabetes can be prevented, and measures exist to detect and manage the condition, improving the odds that people with diabetes live long and healthy lives,” said Oleg Chestnov, WHO’s assistant director-general for NCDs and Mental Health.

“But change greatly depends on governments doing more, including by implementing global commitments to address diabetes and other (noncommunicable diseases).”

These include meeting Sustainable Development Goals (SDGs) target 3.4, which calls for reducing premature death from noncommunicable diseases (NCDs), including diabetes, by 30 percent by 2030.

Governments have also committed to achieving four time-bound national commitments set out in the 2014 UN General Assembly “Outcome Document on Noncommunicable Diseases,” and attaining the nine global targets laid out in the WHO “Global Action Plan for the Prevention and Control of NCDs,” which include halting the rise in diabetes and obesity.

“Around 100 years after the insulin hormone was discovered, the ‘Global report on diabetes’ shows that essential diabetes medicines and technologies, including insulin, needed for treatment are generally available in only one in three of the world’s poorest countries,” said Etienne Krug, director of WHO’s Department for the Management of NCDs, Disability, Violence and Injury Prevention.

“Access to insulin is a matter of life or death for many people with diabetes. Improving access to insulin and NCD medicines in general should be a priority,” Krug said.

World Health Day is a global health awareness day celebrated every year on April 7, under the sponsorship of WHO.

In 1948, the WHO held the First World Health Assembly which decided to celebrate April 7 of each year, with effect from 1950, as the World Health Day.

The World Health Day is held to mark WHO’s founding, and is seen as an opportunity by the organization to draw worldwide attention to a subject of major importance to global health each year.