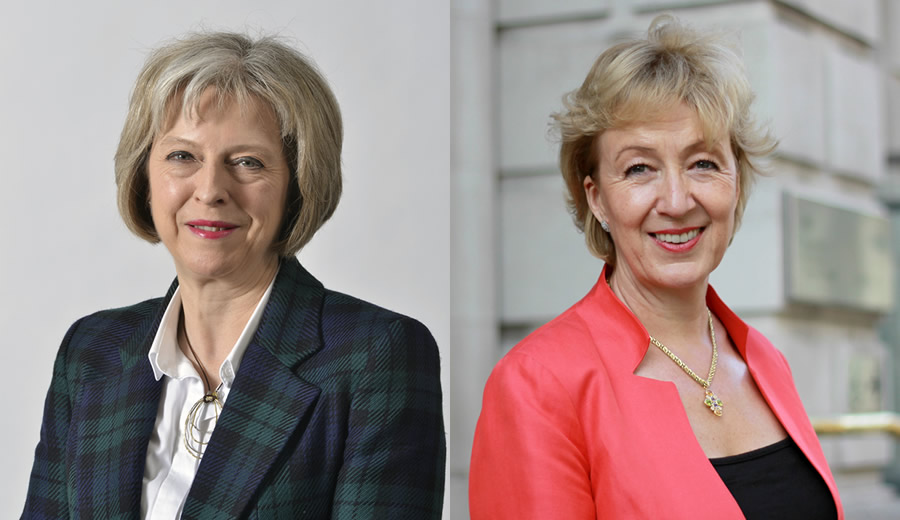 The race to be Britain’s next prime minister was whittled to two on Thursday, with Conservative Party lawmakers assuring that the country will have a female leader — the nation’s first since Margaret Thatcher stepped down more than a quarter century ago. The contest will pit the home affairs secretary, Theresa May, against Energy Minister Andrea Leadsom in a race that features contenders who were on opposite sides of last month’s European Union referendum.

In a vote among 330 Tory members of Parliament on Thursday, May was on top with 199 votes compared to 84 for Leadsom. A third candidate, justice secretary Michael Gove, was knocked out after securing just 46 votes.

Gove had upended British politics last week by jumping into the race for prime minister at the last possible moment. The move forced the favorite, former London mayor Boris Johnson, from the contest even before he had entered. But Gove’s unexpected betrayal also angered many Conservative lawmakers, and forced them to search for an alternative candidate to stand against the new front-runner, May.

That alternative turned out to be Leadsom, a relative unknown in British politics who became a junior minister last year but has never served in the cabinet — normally a prerequisite for holding the nation’s top job.

Leadsom begins the contest as a decided underdog against the better-known May, who dominated both Thursday’s vote and an earlier round of balloting held Tuesday.

But May will now need to convince the party’s rank-and-file, who will take the summer to choose a winner.

She wasted no time. In an apparent swipe at Leadsom just moments after the vote, May said: “We need proven leadership to negotiate the best deal for leaving the European Union, to unite our party and our country.”

Whomever emerges will become prime minister Sept. 9, taking over from David Cameron. Cameron announced his plans to step down late last month, just a day after failing to persuade the country to back the “remain” campaign in a referendum on Britain’s membership in the European Union.

Either Leadsom or May will be the U.K.’s first female prime minister since Thatcher, who ruled the country from 1979 to 1990, and the second in British history.

With a woman now guaranteed to lead Britain, Hillary Clinton topping presidential polls in the United States and Chancellor Angela Merkel continuing to govern Germany, three of the West’s leading powers could all be governed by female politicians by January in a historic first.

Leadsom or May will arguably face the toughest challenge of the three, having to navigate the tricky aftermath of Britain’s E.U. vote

Both candidates have vowed to follow through with a British exit from the European Union — popularly known as Brexit — by triggering Article 50 of the Lisbon Treaty, the never-before-used mechanism by which countries can leave the 28-member bloc.

But they disagree over how quickly to move. May has suggested it won’t happen this year. Leadsom has said she’ll act as fast as possible, as European leaders have demanded. “We need to get on with it,” she recently told the BBC.

Leadsom and May were on opposite sides of the E.U. debate. Leadsom, a former bank executive, emerged from relative obscurity this spring and summer by taking a leading role in the “leave” campaign.

May officially backed “remain,” but in practice largely sat on the sidelines.

She has long held strongly Euroskeptic views, and has said that there will be no rerun of the referendum if she becomes prime minister. “Brexit means Brexit,” she said last week when she announced her candidacy.

Seeking to assuage any doubts among “leave” backers, she has at times even taken a harder line than her pro-Brexit rivals. This week, for instance, she refused to guarantee that E.U. citizens living in Britain will be allowed to stay here once the country has left the bloc, saying the matter is up for negotiation. Other contenders, including Leadsom, took a more conciliatory line, saying that no one would be kicked out of the country because of Brexit.

Despite May’s maneuvering, Leadsom has sought to raise questions about her dedication to the Brexit cause. She argues that the country can only trust a true “leave” champion to drive the hard bargain with Brussels on cutting ties.

May has argued that Leadsom lacks the experience necessary for the country’s top job, and has pointed to her record negotiating tough security deals with her E.U. counterparts.

Now that the field is down to two, it will be up to the 150,000 rank-and-file members of the Conservative Party to pick who will govern this nation of 65 million.

Because the Conservatives won an absolute majority in Parliament in last year’s general election, they do not need to go back to the general public to seek a mandate for a new leader. Instead, party members will cast their ballots by mail through the summer.

Polls show that May is well ahead of Leadsom among Conservative members, just as she was among the party’s Parliamentary delegation.

Leadsom has continued to be an outspoken advocate for Brexit, even as other prominent “leave” campaigners have stepped back from frontline politics amid the chaos unleashed by last month’s vote.

The referendum sent markets reeling, and has forced the pound down to its lowest level in three decades. On Wednesday, the falling pound took another toll: allowing France and its healthy euro to overtake Britain as the world’s fifth-largest economy in terms of GDP, the Reuters news agency reported.

Mohamed El-Erian, chief economic adviser to the investment giant Allianz, told Reuters Thursday that the currency still has a long way to fall — and could reach parity with the dollar if British politicians don’t move quickly to restore stability.

Other experts have not been quite so bearish. But the pound, which has hovered at around $1.30 in recent days, is still widely expected to decline further, with forecasts of a value of $1.20 by year’s end.

Leadsom said Thursday that the pound’s plummet was not necessarily cause for concern, noting that it will help British exporters. In a speech in central London, Leadsom said she wants to “banish the pessimists” and “spread prosperity to every corner of our country.”

The speech was billed as a major economic policy address, but she gave few details of her plans.

Leadsom took second place Thursday despite a flurry of scrutiny over apparent exaggerations on her résumé, which suggested she had spent years working as a fund manager for a major investment firm. Leadsom acknowledged Thursday that she had not managed funds, but insisted that she had held a senior management job at Invesco Perpetual.

Meet Theresa May, the British politician who could be the next Margaret Thatcher “Brexit means Brexit,” Theresa May said as she kicked off her campaign Thursday to become the second female British prime minister after Margaret Thatcher.

A serious, no-nonsense politician: If she says Brexit means Brexit, it probably does.

May said she was the one to unite the country and lead it forward after British Prime Minister David Cameron announced his resignation last week when his pro-European Union side lost the E.U. referendum.

“My pitch is simple: I’m Theresa May, and I think I’m the best person to be prime minister,” she said.

May also campaigned to remain in the E.U., but not loudly, and she is known for her Euroskeptic views.

On Thursday, she ruled out a second referendum, as well as a general election before 2020. She also said that under her leadership, Britain would not apply to leave the E.U. before the end of the year.

In her speech Thursday morning, she sought to paint herself as a serious politician, in contrast to Boris Johnson, the flamboyant former London mayor who had not yet delivered the big “whoa” moment of the day, when he dropped out of the race.

“I’m not a showy politician. I don’t tour the television studios. I don’t gossip over lunch. I don’t drink in Parliament’s bars. I don’t wear my heart on my sleeve. I just get on with the job in front of me,” she said.

May is Britain’s long-serving Home Secretary, where she oversees the vexing issue of immigration. She is praised by some in her party for taking a tough stance on immigration and for introducing visa restrictions on non-E.U. immigrants in an attempt to drive down net migration. For instance, as of April, Americans and other non-Europeans living in the United Kingdom for more than five years have to earn £35,000, or about $47,000, if they want to stay.

She is also reviled by some on the left. Her critics were outraged over a speech she gave last year to the Conservative Party in which she suggested that immigration makes Britain a less cohesive society.

Important stories from around the world.

“When immigration is too high, when the pace of change is too fast, it’s impossible to build a cohesive society,” she said.

Play Video1:28
Speaking at the annual Conservative party conference on Tuesday, Home Secretary Theresa May said Britain would not accept an E.U.-wide immigration and asylum policy “in a thousand years.” (YouTube/Conservatives)

She once famously said that many voters saw the Conservative Party as the “nasty party.” On Thursday, she praised Cameron for helping to detoxify the image of the party.

But while she was mostly full of praise for Cameron, she did say that she wouldn’t sign up for the current government’s plan to turn the budget deficit into a surplus by 2020. She said it was “vital” to continue along a similar path, but she added, “We should no longer seek to produce a budget surplus by the end of the Parliament.”

The 59-year-old is a daughter of a Church of England clergyman and says that public service is “part of who I am.”