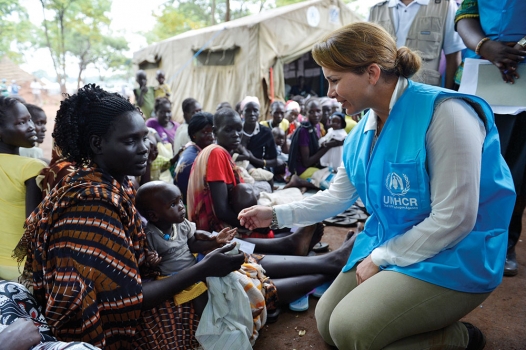 Ireland’s former president and Untied Nations Special Envoys on El Niño and Climate Mary Robinson said European leaders should look into Ethiopia when it comes to ways of handling refugees.

Mrs. Robinson made the remarks after concluding it’s three-day tour this week in Ethiopia.

Ethiopia is one of the countries listed on UN’s least developed nations list, the country however hosts more refugees than any other African countries.

“It is really depressing that at the moment that there is so much attention on refugees and migrants nearly losing their lives then not being treated well when they get to Europe” Robinson told journalists.

“Yet in Ethiopia their are made welcome and they are cared for, the way it should be. Europe can learn from what is happening here in Ethiopia”

While in Ethiopia this week, Robinson held talks with government officials and international Aid agency representatives.

She has also visited El-Nino hit areas to observe the impacts of the El-Nino induced drought and to further witness the level of the international community’s response toward it.

Robinson who was also UN’ high commissioner for human rights travelled to Ethiopia along with Ireland’s largest Aid agencies.

Ethiopia is one of the African nations worst hit by El-Nino subjecting the east African nation to a worst drought in decades hugely affecting agricultural production.

As a result over 10 million Ethiopian’s are forced to depend on food Aid.

The UN special envoy called on the international community to fill 518 million dollar funding gap for Ethiopia to mitigate effects of drought.

Ethiopia whose 80% population depend on agriculture is vulnerable to effects of climate change.

He said Ethiopia has registered 8% economic growth in the ending Ethiopian fiscal year, which is the lowest in about a decade, according to government figures.

“Climate change impacts will continue to undermine development gains and increase the vulnerability of people to natural disaster, therefore the international community has a duty to reduce emissions, support resilience and adaptation efforts in the hardest hit communities” Robinson added.

El-Nino is a natural phenomenon of water warming weather pattern in Pacific ocean.