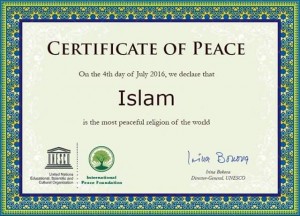 In a major development that should silence critics of Islam who have been blaming it for terrorism, UNESCO has declared that Islam is the most peaceful religion of the world.

The United Nations body released a statement earlier today (7 July) that revealed that UNESCO had partnered with International Peace Foundation six months back to study all religions of the world and find out which was most peaceful amongst all.

“After six months of rigorous study and analysis, we have concluded that Islam is the most peaceful religion,” Robert McGee, head of comparative studies wing of International Peace Foundation declared in a press conference that was attended by UNESCO officials too.

When asked about the terror attacks being carried out in the name of Islam, including the recent ones in Dhaka and Baghdad, the UNESCO official denied that it had anything to do with Islam.

“Terror has no religion,” he said, “Islam means peace.”

To document this official recognition, UNESCO will issue certificates to interested Muslim bodies, which can choose to display them at various places like madarsas, Islamic study centers, mosques, halal stores, slaughterhouses, etc.

Junta Ka Reporter was also given a copy of certificate so that we can display the same to our readers. A copy has also been put in the office of our founder.

“Right Wing organizations should stop maligning Islam and Muslims at least after this certificate from UNESCO,” our founder editor Mofat Javed hoped.

The certificate and announcement from UNESCO has been welcomed by world leaders and religious leaders across the world. Dalai Lama is reported to have asked other religions to learn from Islam and try to be as nonviolent and compassionate as the religion of peace.

However, some Muslim scholars have said that the act of UNESCO was not needed as Islam was already the best and final religion, and a certificate to the same amounts to trivializing the issue as it states the obvious.

The US Does Have Troops in Yemen, Somalia Contrary to Psaki and Sullivan