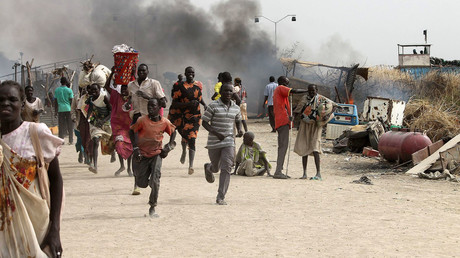 Armed clashes between two factions and waves of heavy gunfire spread across South Sudan’s capital on Sunday, a day after the nation’s fifth anniversary of its independence.

Military helicopters swooped over the city, Juba, and armored vehicles rolled through streets, witnesses said. People took shelter in their homes and hid beneath their beds as the sounds of guns and heavier weapons rose, fell and rose again.

“We are fighting at Gudele, Rock City and Jebel,” said William Gatjiath Deng, a spokesman for Vice President Riek Machar, referring to neighborhoods and suburbs of Juba. “There are a lot of bodies. I can’t even count them.”

Each side blamed the other for initiating the new outburst of violence. Michael Makuei, South Sudan’s information minister, said President Salva Kiir would soon declare a “unilateral cease-fire.”

The United Nations peacekeeping mission in the country wrote on Twitterthat a “heavily armed exchange” had occurred near its base around 8:30 a.m.

“The heavy artillery has been continuing since morning,” Shantal Persaud, a spokeswoman for the mission, said late Sunday afternoon. “The civilians have not been able to move from our accommodation” at the mission’s base near Jebel.

Even as people sought refuge in their homes, witnesses reported that officers were knocking on doors in some neighborhoods, checking identity cards.

The renewed violence broke a short and uneasy calm on Saturday, after fighting had erupted Friday. That violence is reported to have killed at least 150 people, with the toll expected to rise because casualties were still being counted.

Factions of the South Sudanese Army loyal to Mr. Kiir and those backing Mr. Machar, who until this year led a rebellion against the government, have been fighting throughout the capital since Thursday, when the two sides confronted each other at a roadside checkpoint. Five government soldiers were killed in those exchanges.

Fighting broke out again the next day as the two leaders were meeting. The United States said it had met with representatives of the South Sudanese leadership on Saturday and had received assurances that the fighting would stop. The United States helped engineer South Sudan’s independence fromSudan and still wields influence in the country.

On Sunday, however, gunfire erupted again, spreading to different parts of the capital, including near the main army barracks and Juba International Airport.

In New York, the United Nations Security Council scheduled an emergency meeting on Sunday afternoon to address the South Sudan crisis, the council announced on Twitter.

In an email, J. Peter Pham, the director of the Africa Center at the Atlantic Council in Washington, said it was unclear how much sway Mr. Kiir and Mr. Machar and other faction leaders in the “so-called transition government” had over their fighters.

“Between the collapse of oil prices and the destruction they themselves wrought in the civil war, South Sudan is so destitute that there are no resources with which the country’s rulers might employ to bring their followers to heel,” Mr. Pham said.