Myanmar has been under growing international pressure over its months-long, brutal security operations in Rohingya Muslim communities in Rakhine State, and last week saw another barrage of criticism from Malaysia and a United Nations human rights rapporteur.

But the democratic government of de facto leader Aung San Suu Kyi has resisted the pressure and defended the military against allegations of massive rights abuses — to the frustration of the international community, where many have launched harsh criticisms of the democracy idol.

The situation has exposed the complexities of the Rakhine crisis and prompted calls for a change in the approach of foreign governments to dealing with Myanmar’s National League for Democracy (NLD) government and the army. 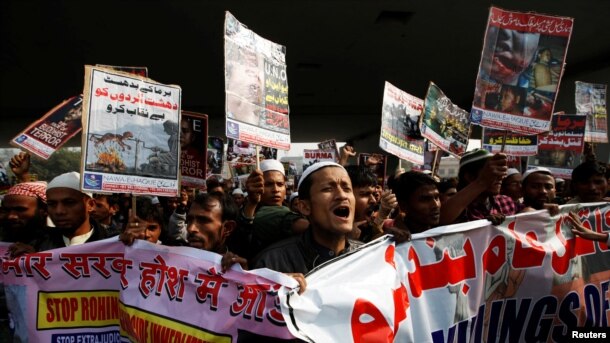 FILE – Rohingya Muslim refugees shout slogans during a protest against what organizers say is the crackdown on ethnic Rohingyas in Myanmar, in New Delhi, India, Dec. 19, 2016.

David Mathieson, an independent analyst, said the international community would do well to shift some pressure away from Aung San Suu Kyi, as her government has no control over the army under Myanmar’s constitution. It is also politically hampered by the fact that the country’s Buddhist majority loathes the stateless Rohingya Muslims.

“A major thing (the international community) can do right now is to reorient a lot of the valid criticism of what is going on away from the State Counselor Daw Aung San Suu Kyi and to the actual perpetrators: the army and the police,” said Mathieson, a former Myanmar researcher for Human Rights Watch.

Regional governments should urgently come up with a unified response toward Myanmar over the Rakhine crisis, he stressed. “The Rohingya issue is a regional issue,” he added.

Last month, Aung San Suu Kyi, who is also foreign minister, hosted an Association of Southeast Asian Nations (ASEAN) meeting on the Rakhine crisis and recently sent an envoy to Bangladesh. But the talks have produced no change in the government’s approach to Rakhine — a region long affected by Muslim-Buddhist communal strife. 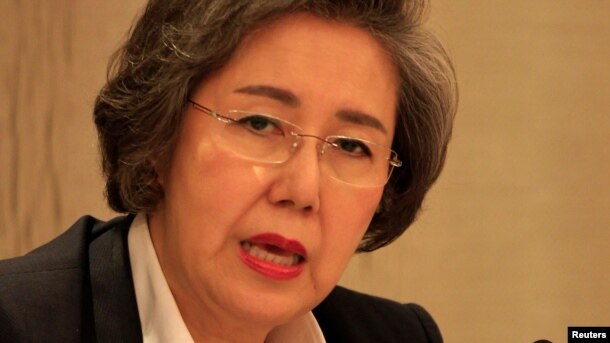 U.N. Rapporteur on Human Rights in Myanmar, Yanghee Lee talks to reporters during her press conference in Yangon, Myanmar Jan. 20, 2017.

She criticized the security forces’ actions and the NLD government.

“The government’s response to all of these problems seems to currently be to defend, dismiss and deny. And this response is not only counterproductive but is draining away the hope that had been sweeping the country,” she said in an end-of-mission statement.

On January 19, Malaysia convened a special meeting of the 51 Organization of Islamic Cooperation member governments during which Malaysian Prime Minister Najib Razak lambasted Myanmar’s treatment of the Rohingya and the “appalling deaths” and “atrocities” they faced.

Malaysia’s bypassing of ASEAN and breaking its tradition of non-interference in domestic affairs angered Myanmar. It said Malaysia’s initiative was “regrettable” and “exploited (Rakhine) to promote a certain political agenda.”

Retno L.P. Marsudi, the foreign minister, visited Rakhine to make a donation to schools there, and a Myanmar delegation involving cabinet members and Rohingya Muslim leaders is visiting Indonesia to study its history of communal conflict resolution. So far, Jakarta has not tried to initiate a regionally united response towards Myanmar.

Not a regional issue

“Half the time the things the international community are yelling are not exactly productive, or problem-solving focused, it’s more about self-interest,” she told VOA.

“It’s purely our domestic issue that we have to solve in our own way. Because these are our people and we are the only ones who know the situation on the ground,” she said.

Aung San Suu Kyi had asked the military to act with restraint during the Rakhine operations, she said, adding that, “so far, it has been followed” as only a few abuse cases had been confirmed and were being dealt with.

According to U.N. agencies, the security operations have caused 66,000 Rohingya to flee to Bangladesh and internally displaced 22,000 more, while aid access has been restricted. Hundreds of civilians were arrested, scores were killed for allegedly attacking the army, and satellite images obtained by Human Rights Watch showed dozens of villages were burned down. 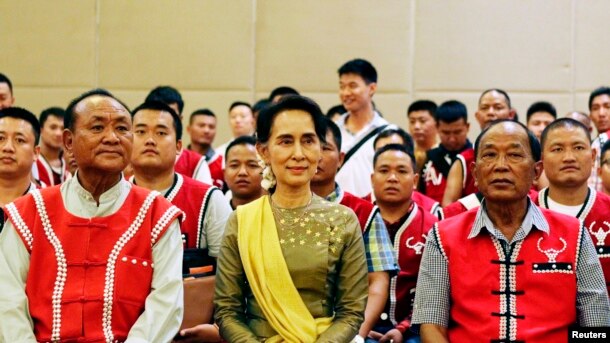 Mathieson said Western and Asian governments that began engaging with the Myanmar military in recent years to encourage the country’s democratic transition should now slow down and recalibrate their interactions to pressure the army over its operations in Rakhine and northern Myanmar.

Asked what he thought of the November visit of Myanmar army chief Senior-General Min Aung Hlaing to Brussels and other European capitals, Mathieson said, “It certainly sends the wrong signal and it was unfortunate timing that he was being feted across Europe while his forces were burning Maungdaw.”

The EU delegation to Myanmar told VOA in a statement that the Myanmar army chief was in Brussels on a long-planned meeting. The statement added that the EU has been calling for an independent investigation into the Rakhine attacks and army operations, and that EU representatives urged a proportionate response to the attacks in meetings with the army chief.

The EU also said it had consistently called on both the government and army to address the “problems faced by the Muslim communities in Rakhine State … including the elimination of statelessness and discrimination against them.”

Kyaw Hla Aung, a Rohingya leader and former lawyer living near the Rakhine capital Sittwe, said he had little hope that any international pressure would make a difference on the ground as long as the army remained powerful.

Asked about Indonesia’s initiative, he said, “Indonesia’s foreign minister came here and donated something for the IDPs. But the government didn’t allow them to donate by their own hands … and they didn’t invite the suffering people, they invited (Muslims) from Yangon. So how can they know about the situation on the ground?”