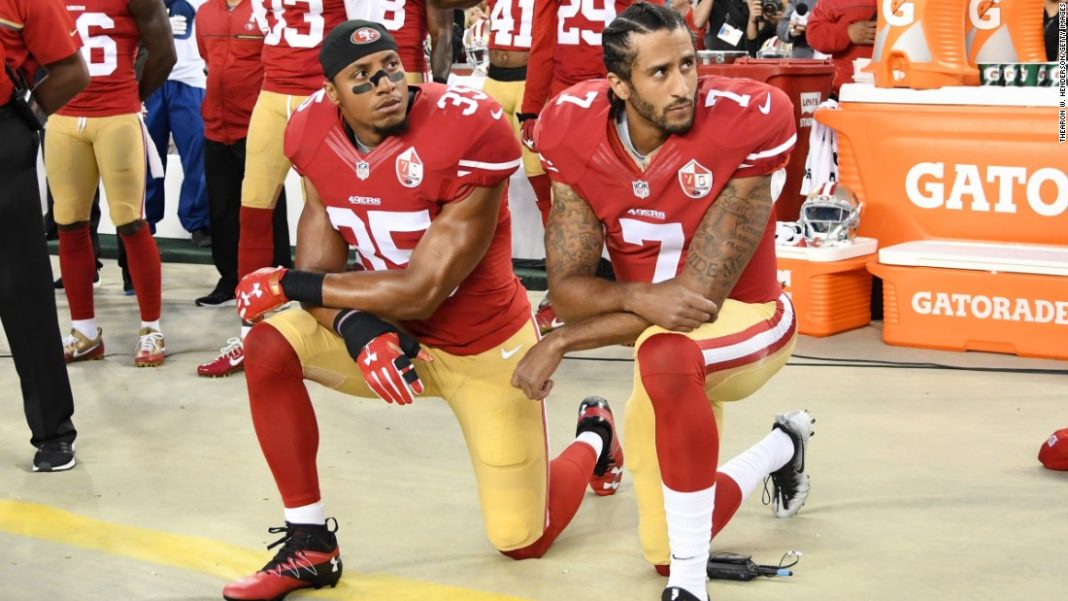 A wave of protests swept across the National Football League as President Donald Trump escalated his feud with players who kneel during the US national anthem to draw attention to racial injustice.

More than 100 players throughout the United States’ most popular sport took a defiant stance on Sunday in the largest such demonstration since former San Francisco 49ers quarterback Colin Kaepernick started the protests in 2016.

Several NFL players have routinely “taken one knee” during the playing of the anthem to protest. It is intended to call attention to what protesting players see as a pattern of racism in the treatment of African-Americans by US police.

The first mass protest took place at the NFL’s London game between the Jacksonville Jaguars and Baltimore Ravens at Wembley Stadium, where a large number of players from both teams knelt.

In Nashville, neither the Seattle Seahawks nor the Tennessee Titans took to the field to observe the national anthem.

“We will not stand for the injustice that has plagued people of this colour in this country,” Seattle players said in a statement just prior to kickoff.

In Detroit, several members of the Lions knelt while singer Rico Lavelle dropped to one knee and pumped a fist in the air at the end of his performance of the “Star-Spangled Banner”.

Trump on Friday called any player who kneels during the anthem a “son of bitch” and said NFL owners should fire them.

“I am deeply disappointed by the tone of the comments made by the president on Friday,” Kraft said in a statement. He said players had a “right to peacefully affect social change and raise awareness in a manner they feel is most impactful”.

When asked by a reporter about the players’ first amendment rights, Trump replied: “They have rights. We all have rights. But when you’re on that field … we have a great flag and they should respect our flag.”

In Chicago, Trump’s feud was the main topic of conversation at the South Loop Club sports bar.

“This is a first amendment issue and the president is supposed to uphold that right,” said Sam Cunningham, 55, who was watching the Pittsburgh-Chicago game with his wife. “He should know better than anyone that to fire someone because of their opinion is not right.”

One patron at a sports bar in Fort Lauderdale, Florida, Trump supporter Tim Kull, 67, said: “Do it on your time, not when you are wearing that uniform.”