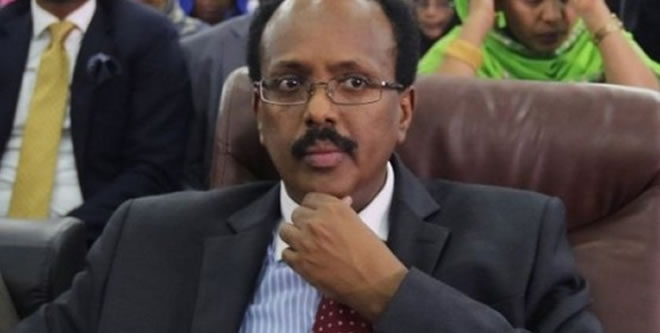 Being boring is one personality trait president Mohamed A. Farmaajo has in common with our first president, Aden A. Osman. Like Aden, Farmaajo is not a great speaker, he has no charisma, and he has no emotional attachment to the masses.

The festivities and the joyful celebrations of February 8 were fueled by a positive delusion, if not self-deception, of a nation battered by decades of conflict and divisiveness. Principled leaders can get away with being boring. They are not combative or spontaneous, but they create sense of stability. Although they are not excitable, they stick with their core principle. While a charismatic leader is over-concerned about his or her image, principled-boring leader is focused on the progress of the institution he is leading. With calm demeanor, he always reminds his people the core values to live by. If tested, he will not shy away from confrontation. Aden Adde was that kind of leader.

Looking back at the first nine months of his presidency, we can easily see the stark difference between Farmaajo and the first president of the country. Aden Adde was a true believer of the constitution and he never led anyone to cross that line. After the election of 1964, many members of the National Assembly, tried to block his choice for Prime Minister. Aden Adde reminded them that he can nominate Habar IISHO as Prime Minister if he wants to (HABAR IISHO was a well-known mentally challenged lady). In contrast to Farmaajo, Aden Adde would not allow the government security services to snatch a Somali citizen, or any human being for that matter, and hand over to another country without court hearing.

After the political spring of February 8, a gloomy cloud of uncertainty sets in over Somalia. Farmaajo came with an aura of a great Somali patriot. The aura of greatness is a God-given gift that comes with a price. Like some beautiful flowers, it needs a constant caring. Flowers may ask for water, fertilizer and a protection from strong winds. Aura, on the other hand, may ask for true sacrifice, YOUR BLOOD.

If you don’t have what it takes to protect her, it becomes a CURSE. Farmaajo could empower his aura of greatness by standing firmly on the popular foundation of patriotism. If you do not have a powerful army that can pacify the whole country, you need the masses on your side. Their awareness and emotions is your artillery.  Don’t let this opportunity slip through your fingers. If you hide in your IVORY TOWER (VILLA SOMALIA) and severe your ties with the people, your enemy will spring up everywhere, and the neighbouring countries will be emboldened to do what they have been doing for the last 26 years, DISMANTLING OUR COUNTRY.

Some of you may know how much I cherish my beautiful wishful thinking. Relying on hope as my strategy, I see Farmaajo redeeming himself, captivating the masses and uniting the country.