Home Sports Premier League: 10 things to look out for this weekend 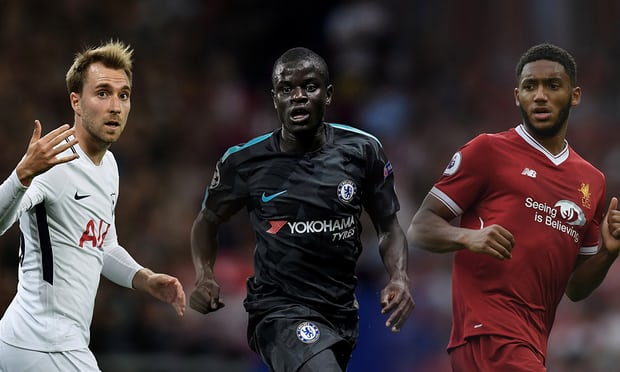 1) Tottenham have chance to make statement

Winning the league does not necessarily depend on victories away to your rivals. Chelsea ran away with the title last season despite losing at Arsenal, Manchester United and Tottenham Hotspur and drawing at Liverpool.

Yet Antonio Conte’s side also made a huge statement at Manchester City in the middle of the remorseless winning run that carried them clear of the chasing pack in the winter.

Everything could have turned out so differently if Kevin De Bruyne had converted an easy chance to make it 2-0 to City in the second half; instead he hit the bar and Chelsea went on to win 3-1, allowing them to maintain their momentum during a pivotal period.

Seasons hinge on those defining moments – and the time has come for Tottenham to send out a message of their own. Mauricio Pochettino’s side have a patchy record in away games against the rest of the top six and last month’s 1-0 defeat at Old Trafford derailed their title challenge.

Tottenham are obviously superior to Arsenal, but they need to show why at the Emirates in Saturday’s lunchtime kick-off.

Only six managers have won both the Champions League/European Cup and the Europa League/Uefa Cup, and 33% of them will be on the touchline at Old Trafford on Saturday.

“I have huge respect for him, for his talent, for his career,” Rafael Benítez said of José Mourinho before this game, “and I want to believe he feels the same.”

He may well believe that, but little that Mourinho has said of the Spaniard in public – which includes saying Benítez “destroyed the best team in Europe” after taking over his Internazionale side, and that Mrs Benítez should concentrate on “taking care of her husband’s diet” – suggests that respect is uppermost in his mind when the two meet.

Of all Mourinho’s many managerial feuds this is among the strangest, because it is more than a decade since the two last crossed swords, in a 1-1 draw between Liverpool and Chelsea in August 2007.

It seems likely the Portuguese will have another opportunity to proclaim his own superiority on Saturday: Newcastle have won one of their last 16 top-flight away matches; United have not lost any of their last 22 league home games. However Benítez has won twice and lost only once on his last four visits to Old Trafford.

In May Chelsea danced and made merry after Michy Batshuayi’s goal at West Bromwich Albion secured the Premier League title. That was pretty much the last time joy took over The Hawthorns, which is mostly the scene of Tony Pulis’s survive-at-all-costs realityball.

You can understand where the manager is coming from, but you can also understand fans bellyaching: after all, no one goes to the cinema to watch the news. Pulis is unlikely to choose the visit of Chelsea as the time to loosen his approach.

He is capable of making life difficult for Chelsea, especially if his three defensive midfielders combine to shut down N’Golo Kanté. But if Antonio Conte’s side win again, leaving West Brom with a solitary win from their last 11 home matches, then Chelsea’s celebrations could be drowned out by calls for Pulis to go.

4) Van Dijk gets to Anfield at last

The visit of Virgil van Dijk to Anfield inevitably draws attention to Liverpool’s central defence. The Dutchman will no doubt be eager to deliver a performance that justifies Jürgen Klopp’s admiration for him. But this may also be an ideal time for the German to have another look at an in-house solution by moving Joe Gomez into the middle of Liverpool’s backline.

The 20-year-old has been in fine form lately and is coming off the back of a successful international break. If he can help shut out Brazil, he can surely help keep at bay Southampton’s stuttering attack.

5) Cork could prove point against Swansea

There was a sense, after his Burnley side beat Southampton 1-0 before the international break, that it would be Sean Dyche’s final match in charge. Everton appeared to be poised, and the Englishman’s stock had never been higher. “If he has been, or gets offered the Everton job, he has to take it. He has to,” said Jamie Carragher on Sky. But Dyche has not gone. “As I’ve said plenty of times before I’m just getting on with what I do here,” he sniffed on Thursday. As it turned out he had a perfectly ordinary international break, which is something that cannot be said of Jack Cork.

The midfielder has had a rather strange career, appearing highly valued by successive employers who let him leave anyway. Southampton allowed him to join Swansea for around £3m in 2015, when Garry Monk said he “was surprised a little bit he was available” and declared it “a great bit of business”, and then the Swans repeated the Saints’ error in the summer. In a settled side Cork has been indispensable, and his form earned a first England cap against Germany last week. He is unlikely to score any goals but in his quiet, understated way could make Swansea regret letting him go.

6) Will Huddersfield loosen the shackles?

Since whupping Crystal Palace 3-0 at Selhurst Park on the opening day, Huddersfield Town have become quite cagey on the road and were especially disappointing on their last two trips, to Swansea and Liverpool, where they were uncharacteristically ponderous.

With Christopher Schindler suspended they will be defensively weakened for the assignment at Bournemouth, although that may be partly offset by the fact that the hosts could be deprived of their main threat, Josh King, who has been struggling with back trouble.

Bournemouth represents an opportunity for Huddersfield to pick up three valuable away points. These are the sort of chances they need to take to stay above the relegation squabbles. On the flip side, Bournemouth can ill-afford to lose such matches.

Given his performances so far this season – six starts, six defeats, no goals, no assists, three shots on target, three bookings and a passing success rate of only 54.1% – there seems little reason for Palace to get too excited about the probable return of Christian Benteke. But only once this season has the Belgian been on the same pitch as Wilfried Zaha, and his addition to a forward line that has been in some way revitalised since the winger’s return from a knee injury certainly makes goals seem more likely.

“We’re hoping Benteke can play a big part for us going forward,” said Roy Hodgson, whose last two words could have meant “in the future” or “when we attack”, and work just as well either way. Everton’s inability to replace Ronald Koeman during the international break seems puzzling but gives David Unsworth – whose hopes of landing the job would surely have been non-existent but for a bizarre combination of freakish circumstances that turned his side’s last game, against Watford, in their favour – one more chance to stake a claim. In the last five games between the teams no side has scored more than once.

8) Puel has selections to ponder

Claude Puel’s main aim is to make Leicester City better in possession so they can genuinely evolve beyond being more than a counterattacking side. But he probably accepts his team are going to spend a lot of time chasing the ball when Manchester City come to the King Power. So the chances of Kelechi Iheanacho starting against his former club are low.

It will be interesting to see whether the manager gives another start to Demarai Gray, rather than recall Marc Albrighton, in an effort to give Leicester speed on the break. But it is the visitors’ speed that he will probably think about most, and stopping Manchester City from running rampant between Wes Morgan and Harry Maguire would be an achievement, especially if Vicente Iborra is not available in central midfield, as Leicester suffered when he was forced off against Stoke.

There seems little chance of a stalemate here: West Ham United have the Premier League’s worst defensive record, while Watford have conceded 18 goals in seven games since they last kept a clean sheet and are swiftly catching up. Both will of course be attempting to remedy matters on Sunday – and Watford’s attempts to do so may be bolstered by the return of Younès Kaboul, who has missed nine of their past 10 games with a thigh complaint – but both defences have at times appeared more in need of a miracle than a mere reorganisation.

“We’ve looked at the goals we’ve conceded and we’ve got the worst defensive record in the league,” says David Moyes. “We’ve got to try and find a way of stopping that. We don’t want to stop the attacking play but we can’t get away with not running back. We can’t get away with not doing the jobs we’ve got to do.” Moyes’s public comments since his appointment by West Ham have been worryingly fatalistic – witness his statement about his role that “if it works, great. If it doesn’t I’ll see the East End of London for seven months, then go elsewhere.”

He also promised to instil a new work ethic, adding that “I hope the players won’t cry if we work them harder”. He was at it again in discussing his attempted defensive reorganisation before this game, saying of his squad: “They’re telling me they want to work hard, be organised and disciplined. I hope once I’ve done that, they won’t be complaining.” It is not exactly inspiring, and one can only hope that he appears less feeble in private.

10) Murray must be on his game

Glenn Murray might not be the quickest or most exciting of strikers in the Premier League, but the 34-year-old’s form in the past month is proof that he still possesses the wiliness to flourish in the top division.

He has four goals in his last three games for Brighton & Hove Albion, who will be hopeful of extending their four-match unbeaten run when they host Stoke City on Monday night, and a first home win since September may well depend on Murray’s nous in the penalty area.

Brighton are organised, committed and tough to break down, but Chris Hughton’s team are not free-scoring and Stoke will believe they have the attacking class to steal a second successive away win.

Playing in such a parsimonious side means that Murray will probably have to be as alert as he was against Southampton, Swansea and West Ham when the slightest of openings come his way.