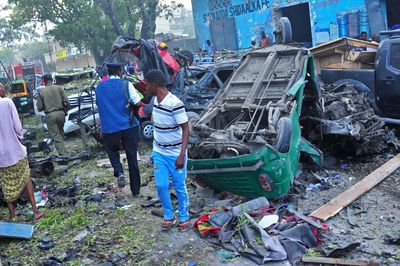 African troops battling an al-Qaeda affiliate in Somalia for the past decade stand little chance of withdrawing by their deadline in two years as the government remains fragile and a spike in militant violence has drawn in U.S. forces.

The longest-running African Union peacekeeping mission, known as Amisom, operates in a shattered country whose lawlessness has bred regional violence — al-Shabaab has staged attacks in Kenya, Uganda and Djibouti — and piracy that plagued global shipping in the early 2000s. Over the past year, the U.S. has boosted its cooperation with the Somali army, targeting al-Shabaab and an Islamic State faction. The U.S. Africa Command said al-Shabaab controls about a fifth of Somalia, mainly in the south.

Assaults on Ugandan peacekeepers this month show the challenge still facing the mission that deployed in 2007 as al-Shabaab stepped up its violence. Since October, Somalia has suffered its deadliest attack in three decades of civil war, debate in parliament threatened to turn violent and the federal and regional governments have been at loggerheads.

Amisom officials still talk as if departure is imminent and say 1,000 troops from about 22,000 uniformed personnel will leave this year. Yet in March they asked the United Nations to repeal a resolution to trim the force, which also includes Kenyan, Ethiopian, Djiboutian and Burundian soldiers.

A 2020 exit is “extremely unrealistic,” said Richard Cole, a former adviser to Somalia’s army. Talk of leaving is based on the “war-weariness” of the troop-contributing countries rather than “the situation on the ground, where al-Shabaab has not been decisively defeated and remains a constant threat,” he said.

U.S. forces have conducted 12 strikes against al-Shabaab so far this year, according to the U.S. Africa Command.

Amisom’s deputy head of mission, Simon Mulongo, said it “will most likely stay longer than 2020-21 because of challenges to statehood development, despite significant gains registered.” Without Amisom, the insurgents are “capable of easily retaking the reins of power,” he said.

Many Somali officials agree 2020 isn’t feasible. The chief inspector of police, Hassan Mohamed Nur, said by phone that the army won’t be able to take over without increased capacity, an organizational overhaul and a comprehensive training program

Political disputes among Somali officials are the Achilles’ heel of government forces, said Hussein Sheikh Ali, a former national security adviser. Amisom is undermined by a “lack of commitment” to finish the job and “constant clashes” between international donors, he said. The spokesman for the Internal Security Ministry, Abdulaziz Ali Ibrahim, said the current priority is solving splits in the government.

Amisom’s departure needs institutions that can assume responsibility for security, according to Matt Bryden, director of Sahan Research, an institute in neighboring Kenya and a former head of a UN sanctions monitoring group on Somalia.

“That scenario will prove unattainable unless there exists a stable political settlement, not only in Mogadishu, but also between the federal government and authorities in other regions,” he said.

Uganda’s army, the largest contributor to Amisom with more than 6,000 troops, has changed its stance on an early pullout after a review, military spokesman Richard Karemire said by phone from the capital, Kampala.

In Kenya — whose army invaded Somalia in 2011, citing a wave of cross-border abductions by al-Shabaab, and later joined Amisom — opinion polls show the majority of Kenyans want the troops home.

While Kenyan army spokesman David Obonyo acknowledged it would “be premature to withdraw before the country is fully fortified,” the presence of his nation’s forces depends on Amisom’s UN mandate continuing. Officials from Djibouti, Ethiopia and Burundi didn’t answer calls seeking details on their withdrawal plans.

For Cole, the former Somalia army adviser, there’s simply no alternative to Amisom at the moment.

“While many Somalis berate and mock Amisom based on long-held grievances, they remain the only realistic option,” he said.

By Samuel Gebre and Nizar Manek