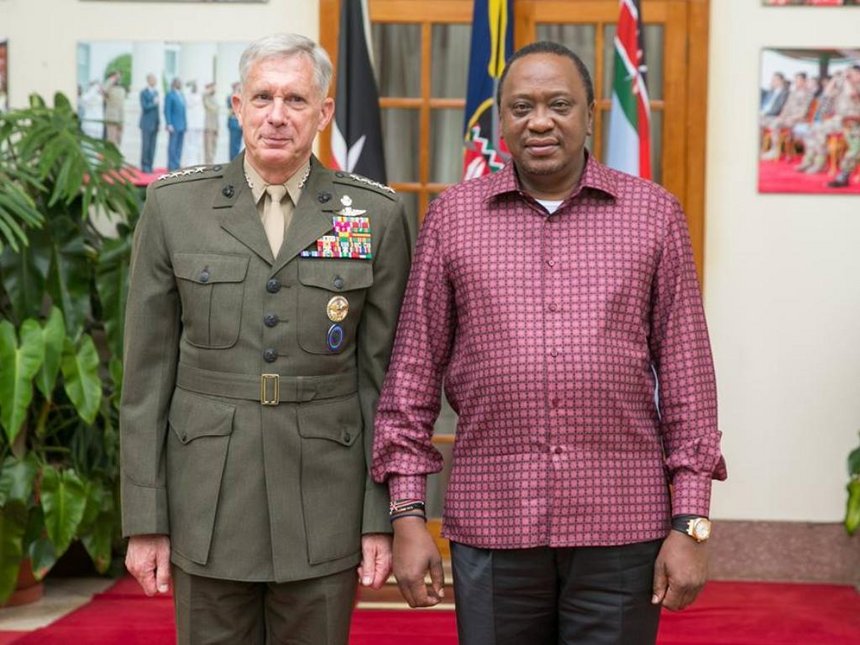 They discussed the situation in Somalia and South Sudan.

The President has been at the forefront in the efforts to restore peace and stability in the two countries.

He told Waldhauser that Kenya is firmly committed to ensuring lasting peace in Somalia — such efforts have in the past been hampered by inadequate capacity and military commands.

Uhuru said the political turmoil in South Sudan has been worsened by unwarranted fear and mistrust between supporters of President Salva Kiir and former VP Riek Machar.

“We shall give it everything we can. But it is not going to be easy,” he said of South Sudan.

Uhuru said IGAD partner states are committed to keeping pressure on Kiir and Machar to work together for the benefit of South Sudanese.

Waldhauser said the US will continue its partnership with Kenya. He praised Uhuru’s economic agenda. Uhuru said the Big Four agenda will create social harmony and a favourable environment for wealth and job creation through manufacturing, affordable housing, universal healthcare and food security.

Waldhauser underlined the need for Somalia to strengthen its leadership structures. Instability is partly due to indirect interference from certain Gulf countries, he said.

“We’re ready to continue assisting the country so long as its federal government is willing to accept our support,” Waldhauser said.

He called for neutrality from the Gulf countries that have been “extending their differences” to Somalia.

“The differences and clashes in these Arabian countries play out in Somalia,” he said. Brigadier General James Craig and US Ambassador Robert Godec were present.